The twenty-year-old musician talks about being a Bay Area Freshman, recording her upcoming debut album, and learning to take her talent seriously. 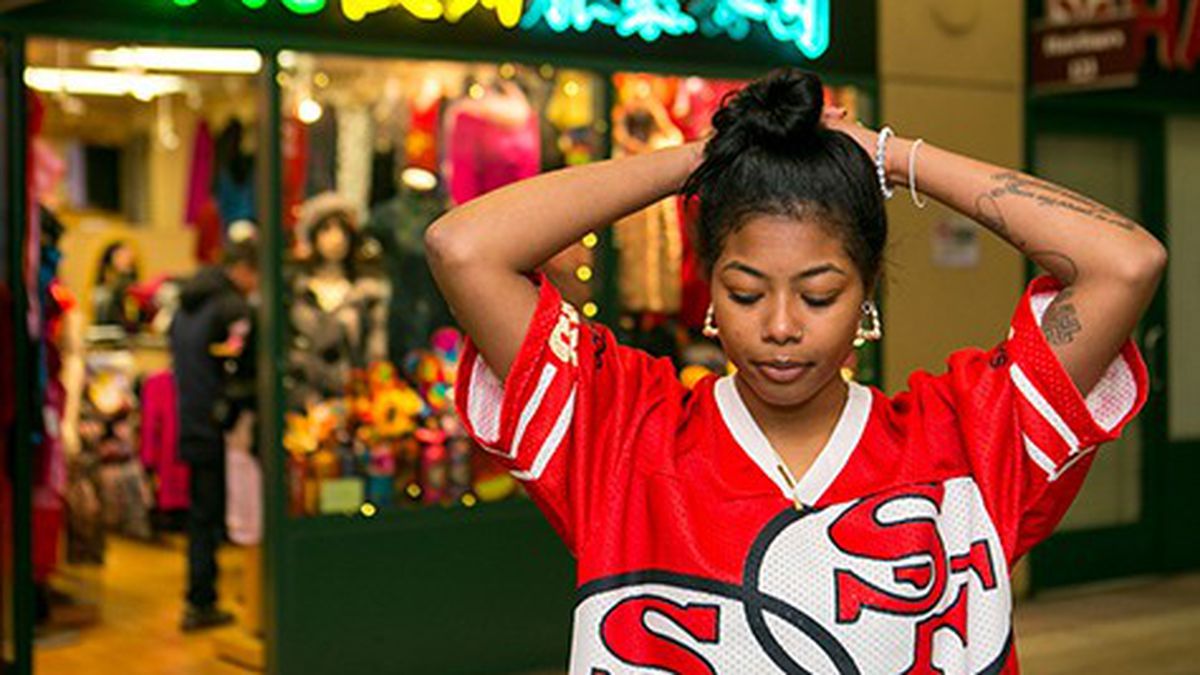 About six weeks ago, emerging Oakland rapper Tia Nomore was inundated by an outpouring of tweets, all hashtagged #BAF10. At first, she thought it was another internet trend like #WCW (Woman Crush Wednesday), because she gets a lot of those notifications.

In actuality, the hashtags represented votes in her name for Thizzler’s Bay Area Freshmen 10, an annual, influential grouping of the Bay Area’s best new rappers. Nomore was vaguely familiar with the local rap roundup and its host, Thizzler on The Roof (Thizzler.com), a popular online source for Bay Area hip-hop premieres. Thizzler’s followers were very familiar with Nomore. A few weeks later, she became the second female rapper, after Kreayshawn in 2011, to be nominated by Thizzler and its cabal of local hip-hop heads. On January 22, she’ll perform at The New Parish for the Bay Area Freshmen 10 showcase.

On a recent day in Oakland Chinatown, where Nomore grew up, she candidly recalled memories from her not-so-distant childhood, pointing out the epic pirate ship play structure on 10th Street that she crawled under as a kid and smoked on top of as a teen. At Broadway and 12th Street, she nodded to a Peet’s Coffee and proudly announced that she had recently quit working there. “Suck It Easy,” her self-released 2014 single, was generating cash from downloads. Rapping is her job now.

Nomore (whose real name is Tiare Claudette) traces the origins of her rapping back to afternoons spent with her oldest brother. “Everything that I was afraid of, he would just shove down my throat,” she recalled. For example, he placed her in front of the television, put on the horror movie Child’s Play, muted the sound, and played a hip-hop beat. It was his unconventional idea of encouraging her to speak confidently and crushing her fear of scary movies, and it dovetailed perfectly into a teenage passion for rap.

Nomore’s descriptions of growing up give the impression that most things come easily to her. And judging by the way she bursts with feisty charm and charisma, that’s easy to believe. By middle school, she was sneaking out to parties and jumping into cyphers (rap freestyling) without hesitation. In high school, she often skipped out to record with friends in East Oakland. At sixteen, she played hooky for a month to live in Los Angeles and record with a producer she met online.

Last May, Nomore garnered internet buzz for a collaboration with Kehlani (a local R&B singer poised for broader recognition herself) on a version of Ty Dolla $ign’s “Or Nah,” and its accompanying video. But Nomore’s own “Suck It Easy,” released with a video in November, was the track that found her a personal spotlight. Nomore finds that funny, because it’s an ex-boyfriend diss song that she recorded two years ago in her friend’s closet. (Later, it was mixed and mastered by her mentor, the producer Exclusive.) The song’s beat is mellow, woven through with a laid-back guitar lick. Nomore’s smooth, casual rhymes mimic that effortless sound, but rip with clean execution and sharp insults like Your mother should have swallowed you whole.

Nomore thinks the song is fine, but she’s ready for more serious work. With undeniable momentum, she’s evolving so fast that her sound can be difficult to pin down. “I’m at this point where I’m still getting used to my voice, so I still hate listening to myself,” she said. Still, she’s noticed a qualitative transformation in her work and said so unapologetically. “I’m sitting on hella material — and it’s not bullshit music.”

Her first album, Halloween, is halfway done. She plans to lay down forty more tracks, on top of the forty she already has, then cull from those. Last summer, she released a preview track called “My Favorite Song” to offer a taste. In it, her rhymes are speedy, aggressive, and clever, placed over beats built with clanks, screeches, and gurgling synth. It’s indebted to trap production, with a particularly dramatic, industrial edge. Perhaps not surprisingly, Nomore commended the music of Danny Elfman, leader of the bizarre new wave act Oingo Boingo and the composer behind the soundtracks to almost all of Tim Burton’s films. She told Exclusive, who is producing the whole album, that she wanted the song to sound like a scary movie. “My Favorite Song” suggests that Nomore’s distinct influences are coming to the fore — and her early memories of freestyling over Chucky are emerging with maturity.