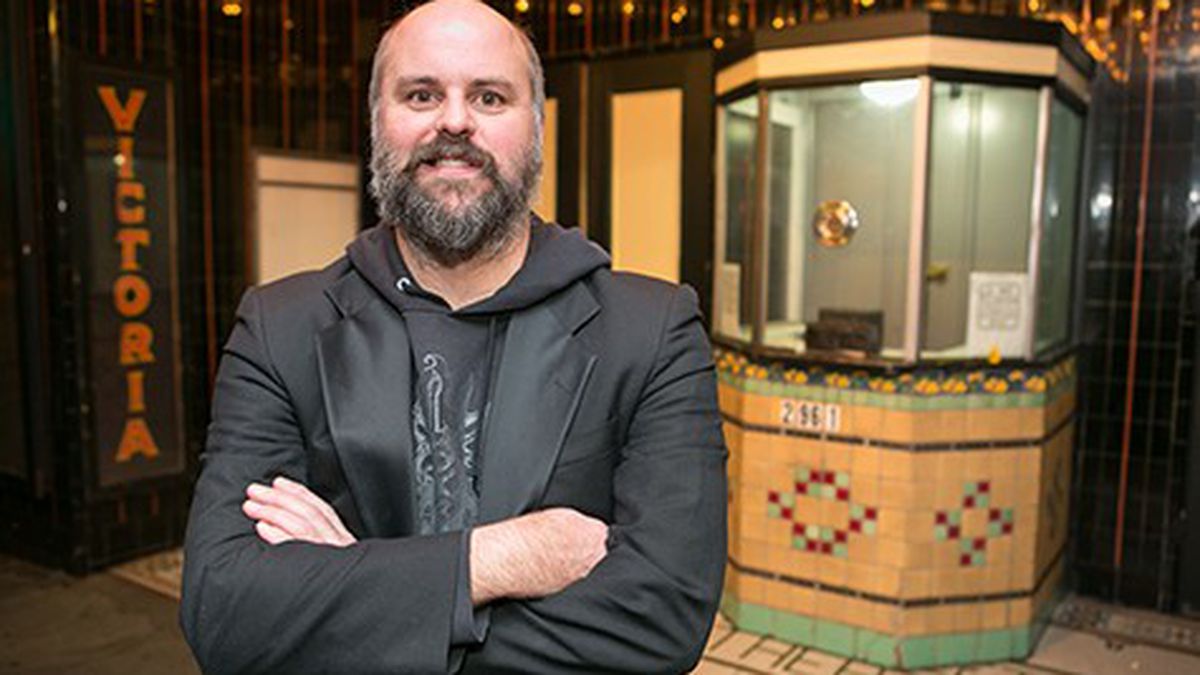 The fest broke its self-imposed rules and scrambled avant-garde definitions to rapturous effect.

The contradictions at the heart of this year’s San Francisco Tape Music Festival started with the headliners: Pauline Oliveros, absent; Brian Eno, absent; and Frank Zappa, dead. Because this is 2015, it’s necessary to add that Zappa didn’t appear via hologram.

Now in its fifteenth year, the San Francisco Tape Music Festival is an annual service from the San Francisco Tape Music Collective — comprised of Joseph Anderson, Thom Blum, Cliff Caruthers, Matt Ingalls, and Kent Jolly — a subset within the experimental ensemble and concert programming group sfSound. Across three evenings at the Victoria Theatre in San Francisco last weekend, a 24-speaker, surround-sound system emitted works by dozens of composers for an audience who sat in total darkness.

The San Francisco Tape Music Festival’s definition of “tape music” is almost comically flexible. Though the selections skewed toward twentieth-century avant-garde techniques such as musique concrete, field recordings, and computer music, the festival describes tape music as any sound emanating from a fixed medium. In other words, it encompasses the playback of just about any recording, but excludes music performed live. Thus, the San Francisco Tape Music Festival presented Mr. Zappa.

If the thought of hearing largely arrhythmic, sometimes repetitive compositions in a darkened room sounds like a snoozefest, that’s understandable. Nap jokes persisted all weekend, even among enlightened tape devotees, but overall the festival was a singular listening experience featuring an enthralling survey of experimental proclivities from the last fifty years. And the darkness, despite its sleepy associations, actually made a case for the visual component of music being somewhat tyrannical — visual stimulus diverts attention away from sound. As the festival organizers gleefully put it, “Nothing to see here!”

Of course, because some of the material relied on what are now sixty-year-old techniques, some of the themes felt rote. One of my friends wondered why composers still feel compelled to emulate sounds of the ocean. While the speaker system and its spatial possibilities enlivened some of the less imaginative pieces, it couldn’t redeem a couple of the meditative, shimmery exercises in new-age atmospherics.

Other conventions, such as the channel-surfing motif, in which sampled sounds are punctuated by the static of what sounds like a moving radio dial, felt familiar but thrilling in context. Francisco Eme, a multimedia artist born in Mexico, built the piece “Cuerno de Chivo” with snippets of a narcocorrido — a form of popular song in Mexico that often romanticizes the exploits of drug cartels — and the sound of street-level gunplay, taken from journalistic footage. The result was an examination of a culture’s complex relationship with violence. Similarly, Pierre-Luc Senecal’s “Schrei,” which is German for “scream,” endeavored to set the human cost of World War II to music. Composed for eight channels, samples of severe choral voices, muttered prayers, and impassioned speeches zipped swiftly from one speaker to the other. The piece imparted a sense of the epoch’s feverish terror.

Many of the pieces manipulated field recordings to recreate particular places. “sunSergeAutomata” by Carla Scaletti relied on clicks, apparently inspired by animals found in the mountains of New Mexico. An arrestingly beautiful eruption at the piece’s conclusion sounded utterly euphoric, with or without the intended environmental associations. Cheryl Leonard’s “Ablation Zone” used field recordings taken from the disappearing Western Antarctic Peninsula, pointing to the porous boundary between the sounds of water and white noise.

Festival organizer Caruthers’ “Notama” stood out among the other field-recording reliant pieces because it seemed to involve a narrative. Water and whispered voices intoning the names of elements gave way to the chatter of jubilant children, eventually seeming to bring listeners inside an intimate home setting. The festival offered the self-description “cinema for the ears.” “Notama” warranted it.

The other frequent cinematic flourish involved the sound of objects swooshing by at high speeds. “FLUX — Sound Re-Design” by Byron Evora, evoked a fighter-jet skirmish scene, full of narrowly avoided collisions. James O’Callaghan’s “Bodies-Soundings” was sculpted in part from slabs and slivers of bass. O’Callaghan set an acoustic guitar and a toy piano on stage. The program notes described it as an interrogation of the instruments, but O’Callaghan’s piece was a festival highlight without the visual tokens. In a way, the superfluousness of that one bit of action on stage actually validated the Tape Music Festival’s programming ethos.

Another highlight arrived from Colin McKelvey, a local artist who presented “Sufficient for a Head.” A seething work of electronics, it conjured thoughts of a massive beast breathing from behind the theater curtain. Instead of a scattershot diffusion, the four-channel piece mostly swayed from one side of the room to the other, which created a violently elliptical sense of motion that was similar to one of the festival’s headlining pieces, “The Day I Disconnected the Erase Head and Forgot to Reconnect It,” an oscillator-based piece from the 1960s by avant-garde luminary Pauline Oliveros.

Saturday’s programming reflected the San Francisco Tape Music Festival’s stated desire to eschew the traditional conventions of performance. Still, as Ingalls noted in his introduction, performance is involved in mixing and diffusing the works. Some composers deployed their own pieces. Organizers mixed the work of absentee attractions (Eno blessed the fest via Twitter).

Ultimately, that bit of identity conflict — a festival that actively rejects “performance” while conceding that the pieces are, to an extent, “performed” — is healthy: It prevailed upon the organizers to break their own self-imposed rules. Sunday night’s program featured almost all live performances mixed with prepared electronics.

Notably, sfSound ensemble violinist Benjamin Kreith and composer Sam Nichols performed Pierre Boulez’s “Anthemes II.” Any ill will the festival had cultivated against watching players on stage instantly disappeared during the piece, which was a rousing conversation between an expressive, maverick string composition and its unstable electronic echo.

Ingalls, a San Francisco Tape Music Collective founder and de facto spokesperson, closed the festival by performing his solo composition “CrusT.” Throughout the piece, Ingalls segued between passages of acoustic clarinet and their electronic tonal equivalent. At the moment that the prerecorded sounds warped beyond the possibilities of his instrument, he stepped to the side of the stage, only to shuffle back into view mid-solo as electronics rumbled. Ingalls, whose festival typically disparages the value of onstage gestures, was in fact a consummate performer. Savor the contradiction. It was a tape music coup: riveting the crowd’s gaze while unfurling sounds from a fixed medium.

Facebook
Twitter
Linkedin
Previous articleWhat to Eat During Oakland Restaurant Week
Next articleAssemblymember Bill Quirk: ‘I am fully in support of legalization’