Developers finally have a plan for the Jack London Square plot that has gone unused for years since Barnes and Noble’s departure back in 2010. This morning, Jack London Square Ventures and Trifecta Management Group unveiled plans for a “major dining and entertainment concept” for the Pavilion Building at 98 Broadway — a project that will include “luxury bowling lanes” and a “large outdoor beer garden.” 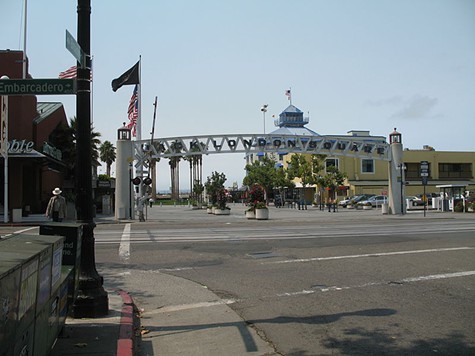 Here are the relevant details from a press release officials just sent out:

The final concept will include casual dining featuring gastropub and coastal California cuisine, luxury bowling lanes, both state of the art and vintage interactive games and a large outdoor beer garden with a long bar and bocce courts.

In addition, the entertainment venue will offer live music and entertainment on weekends featuring local talent as well as an area that can be separated for corporate events and private parties. This centerpiece to Jack London Square will leverage the large outdoor elevated patio along with expansive communal seating areas to maximize the waterfront experience and serve as a community gathering spot.

“This is a major step forward at Jack London Square,” James Ellis, managing principal of Ellis Partners said in a statement. “We have been focused on developing this exciting concept as a key piece of our transformation of the Square and we are thrilled to be working with the talented team at Trifecta.”

The Trifecta Management Group specializes in restaurant and retail developments and has managed venues in Arizona, Florida, Kansas, Kentucky, Minnesota, Ohio, and California. The company’s founders and managing partners were behind GameWorks, the video game and entertainment chain founded by Steven Spielberg, Universal Studios, and Sega.

Construction has already begun in Jack London Square, and the entertainment complex is scheduled to open this fall. The developers said they will announce more details about the project later this summer.

Ellis’ statement added: “Since Barnes and Noble closed in 2010, we have been on a national search for a concept for the building that would accentuate the surrounding retail space and maximize the one-of-a-kind location at the foot of Broadway and adjacent to the Estuary.”

And here’s the statement from Mike Auger, Trifecta Management Group’s managing partner: “This is a one-of-a-kind waterfront venue. We are looking forward to finalizing and debuting our unique food and entertainment concept. One that incorporates everything we’ve learned from projects around the country, but something that uniquely reflects what this market wants.”

While the announcement doesn’t include an official name for the project, judging by the logo on its homepage, Trifecta Management Group appears to be calling the development “Plank.”

Update, 2 p.m.: Representatives from Jack London Square Ventures just sent out these renderings of the project: