State and federal appellate courts made two key decisions that could help protect the Sacramento-San Joaquin River Delta and could derail Governor Jerry Brown’s plans to build two giant water tunnels in the Central Valley. First, the federal Ninth Circuit Court of Appeals upheld a 2008 order limiting the amount of water that can be pumped out of the delta. And late last evening, a state appellate court barred the state from entering private properties in order to do soil tests; a scheme that the Department of Water Resources was relying on to find the best route for Brown’s proposed water tunnels, also known as the Bay Delta Conservation Plan. 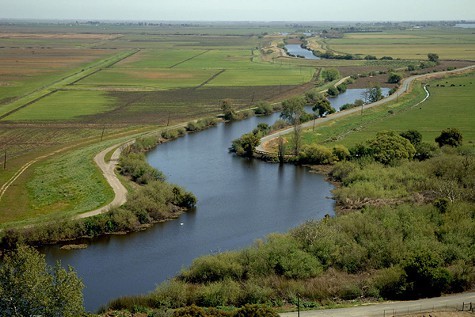 Both rulings will have far reaching impacts on the future of California’s water system, and environmentalists are optimistic that they’ll help the delta’s struggling ecosystem and threatened fish species. “It’s terrific,” said Barbara Barrigan-Parrilla, executive director of the conservation group Restore the Delta. “It really shows how the Department of Water Resources has ignored science in its push to have the BDCP built and continues to over-pump the delta.”

The Ninth Circuit decision stems from a 2008 biological opinion written by the US Fish and Wildlife Service accusing state and federal water officials of threatening the existence of the endangered Delta Smelt—a small pelagic fish whose health indicates the wellbeing of the entire delta ecosystem. To prevent a full environmental collapse, the Fish and Wildlife Service suggested cutting back water deliveries to Central and Southern California.

A number of agricultural interests — including the politically influential Westlands water district — challenged the biological opinion. Federal Judge Oliver Wanger sided with Westlands and the other agricultural interests in 2010, saying the environmental regulations were based on specious science and didn’t adequately consider the needs of people. Wanger called the federal agencies decision “arbitrary, capricious and unlawful,” and he ordered the US Fish and Wildlife Service to re-write the biological opinion.

Environmental groups appealed Wanger’s decision, and yesterday an appellate court sided with them, ensuring environmental regulations in the delta weren’t gutted. “We welcome the opportunity to return our focus towards long-term solutions to restore our chronically over tapped Delta ecosystem,” Jon Rosenfeld, a conservation biologist with the Bay Institute, stated in a press release. “Our current water use practices —including export of vast amounts of water to the agribusiness industry in the southern San Joaquin Valley—are not sustainable.”

The court ruling won’t impact water deliveries since the protections for the smelt remained intact during the appeal. According to the Associate Press, Thomas Birmingham, general manager of Westlands, said he’s considering options for further judicial review.

Then late last evening a state appellate court made an equally important decision that will throw a wrench in construction plans for BDCP. The ruling will force the state to invoke eminent domain if it wants to test soil composition on private properties. The Department of Water Resources had planned to drill six-inch wide, 200-foot deep holes on a number of properties in Delta to find the best route for the proposed twin tunnels. The court found such actions constituted a “permanent occupancy of private property,” and ruled that the landowners were entitled to a formal eminent domain hearing.

The decision could drive up the already ballooning costs of the Bay Delta Conservation Plan and potentially make the $25 billion project unfeasible. “The information the state needed [from the drill tests] is fundamental to the adequacy of that Environmental Impact Report for the BDCP,” Barrigan-Parilla said. “If they don’t have the information, how can that EIR be adequate?”