Accompanied by a four-kayak flotilla and a fifth-generation Martinez resident on horseback, about one hundred environmental activists marched seven miles from Martinez to Benicia on Saturday to protest the local toxic pollution and global climate impact of Bay Area oil refineries. The march was spearheaded by a Bay Area group affiliated with Idle No More, an organization of Canadian First Nations people fighting development of the tar sands oil fields in Alberta and other environmentally destructive projects on their traditional lands. 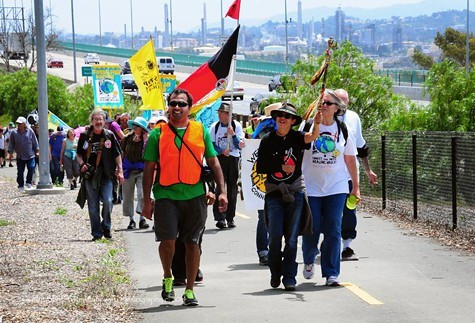 Specific targets of the protest were proposed expansion projects at the Chevron (Richmond), Valero (Benicia), and Phillips 66 (Rodeo) refineries, a crude oil transportation terminal in Pittsburg planned by energy infrastructure company WesPac, and the major investment of Shell (Martinez) in the Canadian tar sands mines. The Saturday march was the second of four planned Refinery Corridor Healing Walks — the first, from Pittsburg to Martinez, was held in April, and future walks are planned for June and July, ending up at Chevron in Richmond. The series of walks aims to “connect the dots” to “bring awareness to the refinery communities, invite community members to get to know one another, and to show support for a just transition beyond fossil fuels,” according to the group’s website.

At a gathering at the Martinez Regional Shoreline before the march, a winner of this year’s Goldman environmental prize, South African Desmond D’Sa, described the high rates of leukemia, cancer, and asthma in his home town of Durban and the community’s struggles against Shell Oil there, urging the crowd to “fight them (refineries) wherever they are.” Penny Opal Plant, of the East Bay Idle No More group, said she only recently began to conceive of the refinery corridor as a total area suffering from the “immense devastation” caused by oil refineries.

Richmond residents have long protested pollution from Chevron, most recently the toxic explosion that sent 15,000 seeking medical treatment in August 2012. Benicia residents have also organized to oppose environmental hazards. In the last year, local groups have also formed in Pittsburg, Crockett-Rodeo, and Martinez to protest refinery expansion and transportation plans, including major increases in the amount of crude oil to be carried by rail through the Bay Area and beyond.

Describing the dangers of mining, refining, and transporting oil, and looking ahead to a future free from fossil fuel, Opal Plant said, “We are Mother Earth’s immune response awakening. We’re born at this time to do this thing.” 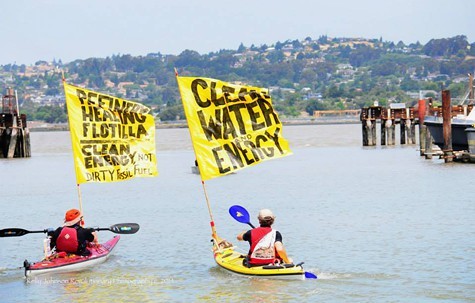 The group’s route first went through the Shell refinery, then over the bridge to Benicia, with a view of the Valero refinery there. From a hilltop vista point next to Carquinez Strait, Benicia activist Marilyn Bardet pointed out refineries and planned oil industry project sites, as well as the environmentally Suisun Marsh. Railroad tracks leading to the Valero refinery, she said, go right through the marsh. A spill of tar sands crude oil, she added, would be impossible to clean up because the oil is so heavy it would sink and cause irreparable damage.

The next Refinery Corridor Healing walk is scheduled to go from Benicia to the Phillips 66 refinery in Rodeo on June 14.