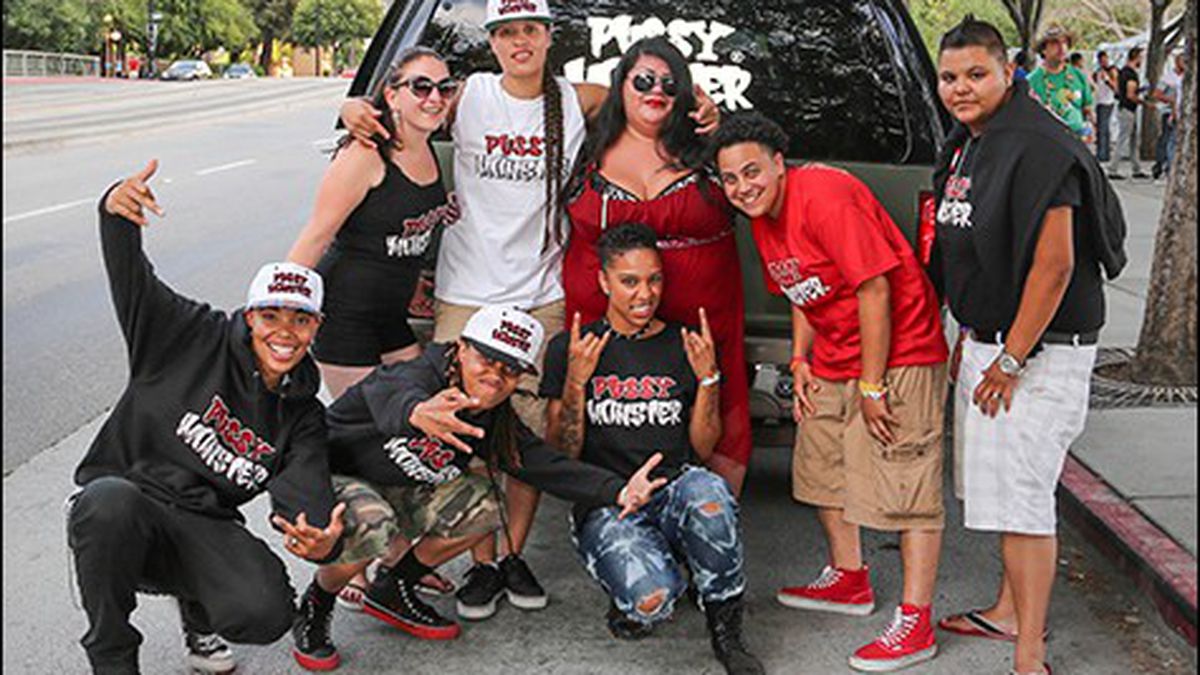 A new Oakland-based entertainment company aims to promote LGBT musicians who aren't afraid of being out, proud, and in your face.

When Richmond-based hip-hop artist Phresh (aka Courtney Oliver) was preparing to release her first mixtape in 2009, she noticed that her producer wasn’t all that enthusiastic about it. He seemed pumped in the studio, but didn’t attend her showcases and wasn’t promoting her. Finally, “The producer said, and I quote, ‘You are the shit. If you dress like a girl, I’ll rock with you. I can’t get behind this look,'” Oliver recalled.

“This look” refers to how she dresses — tomboyish, like a “stud,” she said. Although Oliver said she respected the fact that her producer was honest about his feelings, the rejection, “just made me more hungry.”

Now, Oliver is collaborating with a new Oakland-based entertainment company that is promoting LGBT women in a way that is sure to get her more attention than her apathetic producer. She’s “doing it Pussy Monster-style.”

That’s the slogan of a new fashion, entertainment, and music venture, which formally launched on Valentine’s Day this year and was inspired by a raunchy T-shirt made by Pussy Monster’s founder, Perla Nolasco. Nolasco, who grew up in the East Bay and lives in Oakland, first wrote “Pussy Monster” on one of her tank tops several years ago while out with a group of friends in Las Vegas. To Nolasco, it was just a provocative play on the name of the Sesame Street character Cookie Monster, and was one of many obscene phrases she and her friends were sporting. People loved it.

“They were raving about it. ‘Where did you get your shirt? I totally want one,'” she recalled people saying. “That’s where I got the idea that this can be a style of its own. I realize that it’s a little vulgar, but that’s the point of it — to be in your face. It’s shocking, yet humorous. … It’s meant to be bold.”

The Pussy Monster franchise, Nolasco said, “is just for us: for LGBT women, by LGBT women.”

Nolasco has a background in community activism, LGBT advocacy, and public health. She spent part of her childhood in and out of the juvenile justice and foster care systems. “It showed me that there was really a lack of services for youth like myself, a young woman of color,” she said.

By age sixteen, however, Nolasco had already begun working with nonprofit and advocacy organizations in the East Bay, including Young Women United for Oakland and the Ella Baker Center for Human Rights’ Books Not Bars program. Now 30, Nolasco works as an HIV testing and counseling coordinator at Tri-City Health Center, a Fremont-based clinic that has a program specifically aimed at helping transgender people. That’s her day job, at least.

At night, she is easily spotted driving to and from clubs and events around Oakland in her green Ford Expedition SUV, which features the bold, white-lettered Pussy Monster logo plastered on the back window along with the URL for the Pussy Monster website (PussyMonsterStyle.com).

“The truck has become a little celebrity all by itself,” she said. “Everywhere I go, especially at night, I can see people taking pictures behind me because the flash is going off. … The truck is more known than we are.”

Nolasco is well aware of the raw marketing value of the Pussy Monster name. Even though her commute to work is short, she said she often notices a spike in visitors to her website during that time, sometimes as many as fifty people logging on after seeing the truck. In some cases, she’ll observe people’s reactions in person. “‘Oh my god, it’s a site for lesbians!’ Or people are like, ‘What do you do, is this a pet place?'” Anything that drives traffic and creates buzz for the artists and the brand is a good thing, she said.

Pussy Monster now has a crew of about ten artists, designers, models, and others who are working on the company’s fashion line, hosting events and parties, and supporting musicians. In the clothing department, the company sells its gear — mainly T-shirts, hoodies, and hats, all with the simple, eye-catching Pussy Monster logo — across the country.

On the music side, Nolasco is doing marketing and promotions for musicians, helping them book shows and get stage time — sometimes at Pussy Monster-sponsored events — and connecting them to producers, videographers, and more. She plans to launch casting calls and to expand the website as a platform to showcase artists’ music. At this stage, she is primarily working with Oliver (Phresh) and another Richmond-based artist, a female rapper named Billie Jr., who is also Pussy Monster’s videographer.

Nolasco, who identifies as a lesbian, said there is clearly a need for this kind of support in the Bay Area and across the country, where artists, especially lesbians of color, often struggle to find labels and collaborators that allow them to be themselves. “Most of the music out there is so mainstream: boy meets girl, falls in love. This is for us,” she said. “This is more for our culture, our lifestyle. … It can be hard for LGBT artists to find music labels that acknowledge their talent. And it’s so male-dominated.”

While it’s great when closeted celebrities come out, it’d be even better if artists have a space to be open when they are emerging, said “Shugga” Shay Franco-Clausen, owner of PlayNice Productions, which promotes LGBT-inclusive events and is partnering with Pussy Monster. “You look at the mainstream right now and how many openly gay artists start in the game openly gay?” she said. “They normally don’t. They have to get into it and once they are established, it’s, ‘by the way, I’m gay.'”

When producers decline to take on LGBT artists because of their own biases, it’s obvious “they are missing out,” she said, pointing to the fact that people discriminate against her when they realize that she is married to a woman.

This discrimination can play out in direct and subtle ways, said Oliver. If a producer is not explicitly telling her that she needs to dress more femininely, he may be reluctant to work with her for fear that he will face backlash from others, she said. In one case, she recalled, “When I was brought into the studio, you could feel the energy shift. … This is not the type of woman they were looking for. She’s raw and we really like her style, but she doesn’t fit the brand we are trying to promote.”

She continued, “What can you say to that? I just have to keep searching. … I don’t conform to anybody. The day I do will be the day I die.”

Oliver said that she doesn’t want to classify herself as an “LGBT artist” per se, but is simply interested in working with people who don’t push her to be something she’s not. “I dress the way that I feel. I don’t wear the nice clothes. Phresh is fresh in her own way.”

For her, the message of Pussy Monster is simple: “It’s being proud of who you are. It’s not hiding it. It’s being that girl that has Pussy Monster clothes and doesn’t care that the clothes say ‘pussy.’ It’s being a voice for people who wouldn’t necessarily wear it.”

Plus, she said, the logos attract a lot of interest from men. “Pussy is something that everybody wants.”