.A Comic, a Coffee Man, and His Opera

Two former Berkeley artists return to stage their opera based on the comic book Too Much Coffee Man. 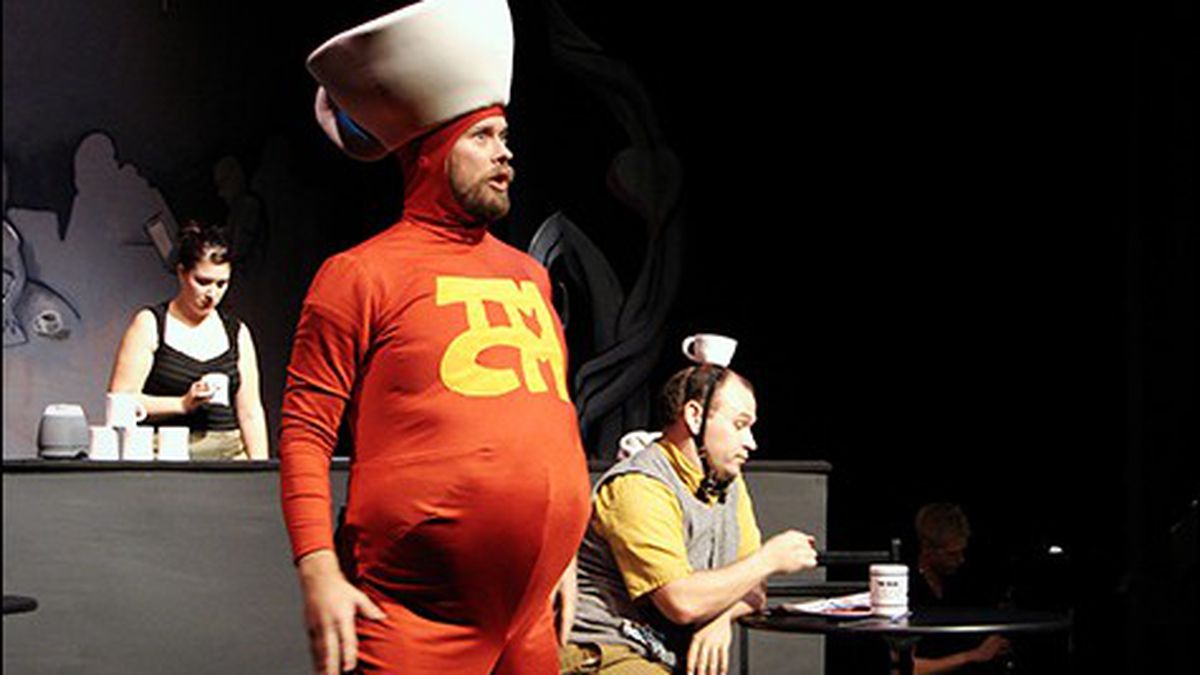 At first, the premise of Too Much Coffee Man Opera sounds typical of the art form: A narcissistic protagonist is caught in an unrequited love triangle and feebly contemplates his existence through dramatic songs. But when the lead baritone, Too Much Coffee Man, walks on stage wearing long underwear and an over-sized coffee cup on his head, it becomes clear that he’s no Don Giovanni.

Too Much Coffee Man is, in fact, a comic-book character created by Berkeley native and former Daily Californian cartoonist Shannon Wheeler. In a phone interview from his home in Portland, Wheeler explained that he started Too Much Coffee Man in 1991 as a one-off mini-comic to promote his first book, Children with Glue. The book didn’t take off, but Too Much Coffee Man did, and he’s been drawing and writing it ever since. The comic is a satire of typical superhero stories, placing its coffee-addicted main character in everyday situations that expose his loneliness and longing.

“I started it as a gag,” said Wheeler, who also contributes cartoons to The New Yorker and The Onion. “I never thought it would have legs.”

Wheeler and his longtime friend, composer Daniel Steven Crafts, said the same thing about Too Much Coffee Man Opera when they started working on it in 2003. “We were having dinner in Berkeley and talking about doing something together,” said Crafts, who spent 25 years in Berkeley before relocating to Albuquerque. “Somehow the notion came up of an opera using his character Too Much Coffee Man, and we both thought it was a terrible idea.”

“At first I didn’t think it would turn into anything, but [Crafts] understood exactly what I was trying to get at. He got the humor,” Wheeler said. “Then I couldn’t pass it up.” Ten years — and a lot of work — later, Wheeler and Crafts will return to Berkeley to stage Too Much Coffee Man Opera at Freight & Salvage on November 29.

Crafts is best known for his work with the late world-class tenor Jerry Hadley. In 1996, the opera singer commissioned him to write a piece called “The Song & the Slogan,” which was based on Carl Sandburg poems and was the subject of a PBS documentary that won an Emmy. Crafts said he viewed Too Much Coffee Man Opera as an opportunity to take traditional opera somewhere new, since no opera had been based on a comic book.

“I knew that to make it work, it needed strong, clear melodies, though at the time I had no idea we’d be doing it with genuine opera singers,” Crafts said.

Wheeler said the duo worked on the opera casually for about three years. As the libretto became more challenging, Wheeler brought in poet friend Damian Willcox to help with the more complicated rhyme structures.

“It got harder, like finishing a puzzle,” Wheeler said. “Daniel would say, ‘I need a three-syllable word here with the emphasis on the second syllable.’ I had to learn more and more about the art form.”

In early 2006, when the opera was about three-fourths of the way completed, Wheeler started talking about it online, which sparked the interest of a performance space in Texas that offered to premiere it. “Everything seemed to be going great and I started working on it full-time,” Wheeler said.

Then the concert hall in Texas burned down. Then Wheeler and his girlfriend broke up. Then his freelance gig for The Onion fell through (but eventually came back). Wheeler said he was “bummed out for a month,” but finally left his house to attend a friend’s art opening. It was there that he met the director of the Portland Center for the Performing Arts.

“It was completely out of character for me, but I was depressed enough and drunk enough to pitch her the opera,” Wheeler recalled. The director gave Wheeler her card and he followed up by sending her the libretto. Then he hired musicians to record the score, which he also sent her. He pitched her with costume designs, and even built a model of one of the performing arts center’s concert halls. “That’s when she thought, ‘This guy is for real, he’s really going to do this thing,'” Wheeler said.

Too Much Coffee Man Opera debuted at the Portland Center for the Performing Arts in 2006. It has since been performed in San Diego, Albuquerque, and at the Astoria Music Festival in Oregon.

The Freight & Salvage show will mark the opera’s Bay Area premiere and stars local talent, handpicked by Crafts: baritone Michael Mendelsohn as Too Much Coffee Man; tenor Keith Perry as Espresso Guy; mezzo-soprano Erin Neff as the Barista; pianist Charles Worth; bassist Carla Kaufman; and clarinetist Michael Jordin. That’s the entire cast, which further differentiates the opera — it’s not costly to produce. Whereas a full production opera can cost $50,000, Wheeler said Too Much Coffee Man Opera has been produced for as little as $2,500.

For now, Too Much Coffee Man Opera is scheduled to happen one night only, but Wheeler hopes to return, maybe with another opera: “I have all these other characters from my other comics that I would love to write an opera for.”