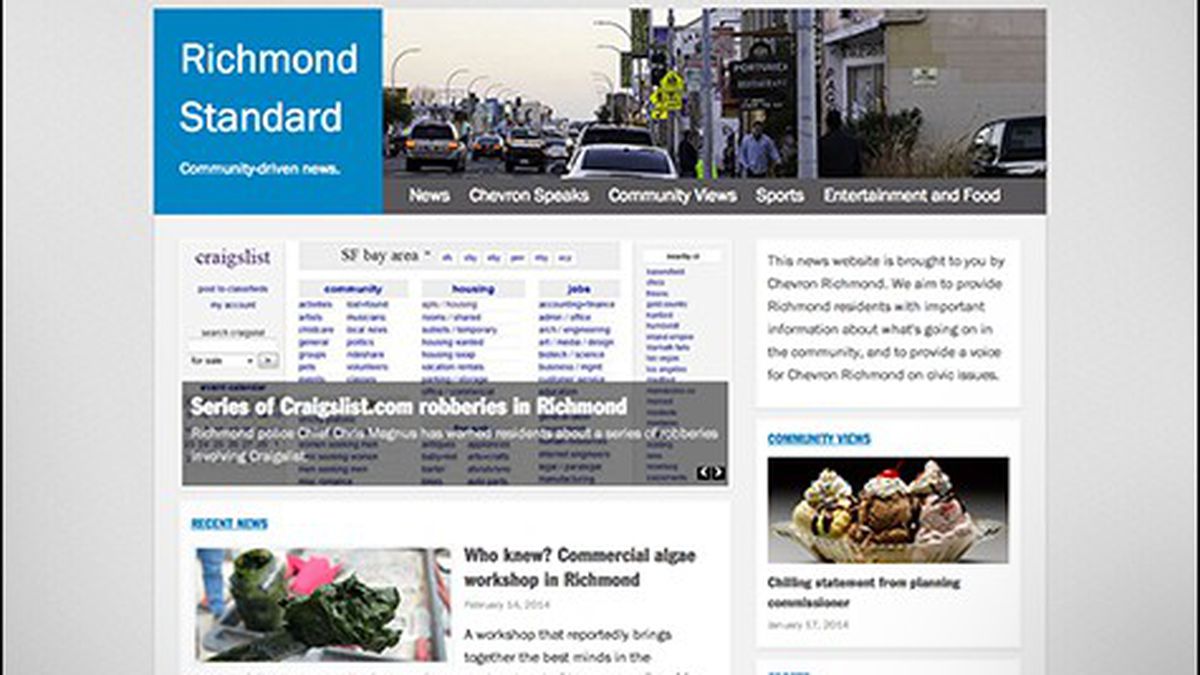 Fed up with negative news stories about its Richmond refinery, the oil giant has created a website that it says will focus on "community news."

Over the past decade, Chevron’s image in the East Bay has taken a beating, particularly after the massive explosion and fire at its Richmond refinery in 2012 that sent 15,000 area residents to local hospitals. In addition, numerous reports in recent years have pointed to serious health dangers posed by the refinery for people living near or downwind from it. So in an effort to restore its reputation in the community, the oil giant has launched a new website called Richmond Standard that it says will focus on “local community news.”

Melissa Ritchie, a company spokesperson, said the website is also part of Chevron’s larger campaign to build stronger relationships with the community. “We want to make sure there’s a way to have a conversation with Richmond,” she said.

The site’s editor is Mike Aldax, a former reporter for the San Francisco Examiner who is also an executive with Singer Associates Inc., Chevron’s San Francisco-based public relations firm. The site covers some local news and events, and features a corporate issues section called “Chevron Speaks.” Aldax said his vision is to model Richmond Standard after a neighborhood blog like Bernalwood in San Francisco.

Asked if he considers himself more of an editor or an advocate for Chevron, Aldax said, “My role is, in a sense, both.” Aldax said his job is to report the news accurately, and “Heck, if the news is popular enough, people will read the ‘Chevron Speaks’ section.”

At the moment, Aldax is producing all the content himself but is hopeful that the site can become a place where “community members can share information with their neighbors.”

However, the site has no plans to cover controversial topics — particularly if they paint Chevron in a negative light. “If someone wants to oppose Chevron, this is not the place for that; they can, though, post comments … as long as it is not offensive,” said Ritchie.

The company also plans to use the Chevron Speaks section of the site to respond to criticism. In fact, one of the first posts on the site was a Chevron statement about a recent Express article concerning oil refinery projects in the Bay Area that could bring in more tar sands and fracked oil to the region.

Ritchie said, however, that the site isn’t “about Chevron,” but is a response to a need in the city. “We know from listening, [community members] want a place where they can hear positive stories about Richmond that are not covered by the media. This gives them an outlet.”

But Richmond resident Najari Smith said that Chevron is already communicating with Richmond. He pointed to Chevron’s prominent billboards; its newsletters and mailers; RichmondProud.com, a company website dedicated to the refinery’s modernization project; and publications distributed by the Chevron-funded nonprofit For Richmond. “While everyone can have a voice, you can pay for a lot of voice,” Smith said.

Richmond resident Felix Hunziker said he welcomes more news options. “It’s obviously an outlet for Chevron by Chevron, but as long as that’s clear — and I think it is — I don’t see a problem with it.”

But Hunziker said he is skeptical the Chevron site can become a platform for community engagement. “I’m just not seeing it as a place where you’ll have active community dialogue,” he said.

Malcolm Marshall, editor of a monthly paper called The Richmond Pulse, said he had a strong visceral response to Chevron’s claim that the Richmond Standard is community-driven. “The corporation is the community?” he said. “How can you be both of those?”

So far, Aldax said community engagement has been minimal, but he said it’s still the early days. “People are starting to figure out who we are, and what we’re doing.” Through last week, the site had featured a series of crime and breaking news stories, along with previews of local events.

Ritchie said the site also offers a new model for the future of journalism — one that is funded directly by corporations. “We believe the website has the potential to blaze the trail for a new model of corporate-sponsored, community-generated news,” the website reads.

Aldax said he is inspired by this idea. “It’s a pioneering effort in a sense,” he said. “It is a positive opportunity to blaze a new trail, do those things I know how to do well for a community. That, to me, is why you’re a journalist.”

When asked about possible conflicts of interest, Aldax said his content will steer clear of hot-button issues. He said Chevron’s corporate voice will be limited to the “Chevron Speaks” portion of the site.

Ritchie said Chevron officials know that they are going to have to gain people’s trust, but added she hopes that Richmond Standard will be a useful tool for people. She said success for the site would mean “that people are able to get information about great things happening in Richmond.”

But with this year’s mayoral election, some Richmond residents see the site as a cynical move on Chevron’s part to further influence city politics. Schneider said she feels like Chevron is trying to “usurp the community.”

Donald Bastin, historian and author of a book titled Richmond, said, “Chevron doesn’t have the kind of place it used to have in the community.” In the 1930s and 40s, Chevron was the government in Richmond, Bastin said. “They were hand-in-glove. It’s not that way anymore.” Back then, Chevron’s name was Standard Oil Company.

Aldax said he understands residents’ skepticism of Richmond Standard, and maintained that the launch of the site has nothing to do with the upcoming mayoral election. Aldax said political endorsements will appear in the “Chevron Speaks” portion of the website, if at all.

“The onus is on myself to really prove to the community that we’re a reliable news source.”

Neither Chevron nor Aldax would disclose the cost of running the website or his services.