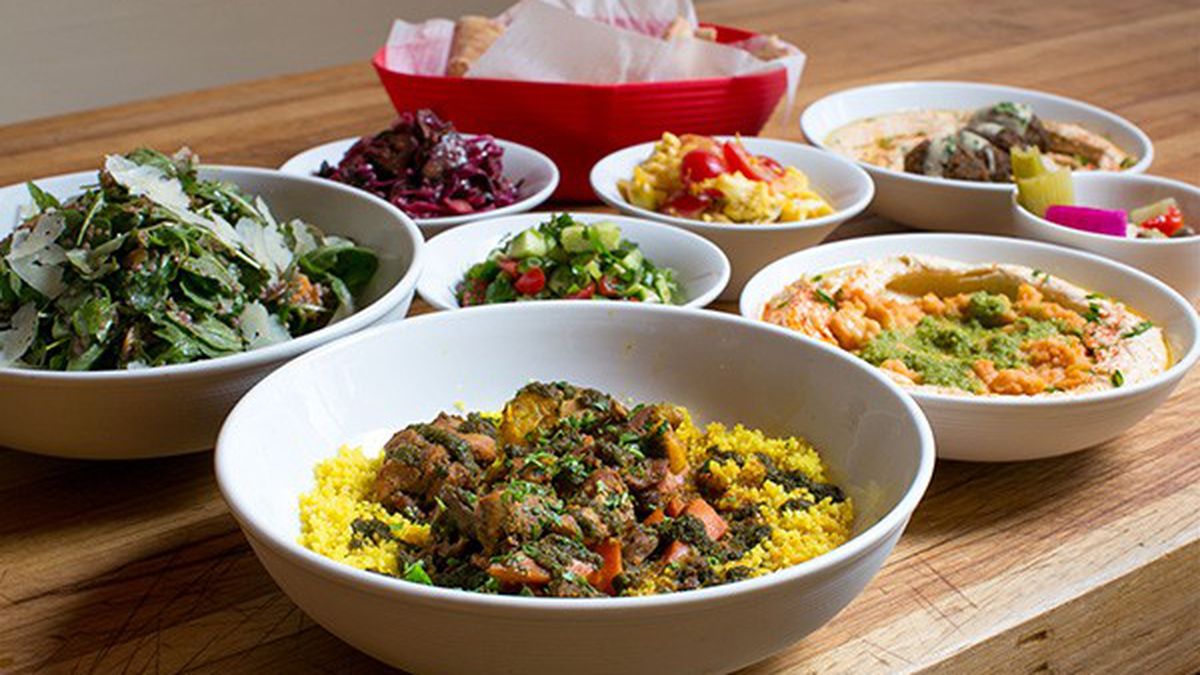 The East Bay’s Middle Eastern food scene is having a quiet resurgence. In the past year alone, we’ve had an influx of eateries with Israeli, Palestinian, Algerian, Afghan, and Kurdish roots. But two new restaurants in Oakland — Ba-Bite and Oasis Grill — stand apart from the crowd.

The more obviously striking of the two is Ba-Bite, an airy, order-at-the-counter spot in the former Pizza Pazza location on Piedmont Avenue. Husband-and-wife owners Robert Gott and Mica Talmor (the main chef, who hails from Israel) have been running a high-end catering business for years, but this is their first restaurant.

No one would ever accuse the Bay Area food scene of having brought too few salads into the world, but casual restaurants at which salads are meant to be the main attraction — and, for many customers, the entire meal — are surprisingly hard to come by. So the true salad devotee may feel a slight thrill upon seeing that at Ba-Bite, the salad section is the literal heart of the menu — seven different salads, or a full third of the restaurant’s total offerings, positioned front and center on the hanging menu boards.

Many are riffs on traditional salads — the Persian-inspired Shirazi salad, with its mix of cucumbers, tomatoes, and fresh herbs, for instance — but the overall approach is grounded in the Bay Area’s local/sustainable/organic ethos. I liked the crunch of a red cabbage salad studded with slices of dried fig. And a yellow-tinged cauliflower salad was a pitch-perfect balance of flavors and textures: the elusive fragrance of the saffron water in which the cauliflower was roasted, the brininess of the green olives, and the sweetness of the outrageously plump golden raisins — the fattest I’ve ever seen.

The name of the restaurant is a play on the Hebrew babait, or “at home” — a phrase whose wholesome implications are self-evident. But Gott explained the invocation of home is also literal: As busy caterers, he and Talmor rarely ever want to cook anything elaborate at home. So they eat a lot of big salads, prepared and served in the same bowl so they don’t have to do extra dishes.

You can eat that way at Ba-Bite, too, especially if you order a salad in its “composed” form, which turned out to mean a big tossed salad, bulked up with lettuce (or some other salad green), with the option to add a piece of seared salmon or some saffron lemon prawns to make it a heartier meal. But it’s more fun to order a spread of smaller, mezza-style salads, which dispense with the excess greenery and concentrate on the essential ingredients.

But the best reason to dine at Ba-Bite is the hummus — all told, five different platters: hummus topped variously with falafel; hot garbanzo beans; juicy, generously seasoned strips of lamb shishlik; and so forth. (As Talmor put it, “Robert wanted to have a hummus restaurant. I wanted to have a salad restaurant.”) Some versions were lesser-known regional variations, such as the Qudsiah hummus, which was topped with cooked dry fava beans, which added a textural contrast and pleasant tang. But even the plain hummus was so good that eating it felt like a special occasion. What I loved was how smooth and airy the hummus was, almost as though it had been whipped, and how it was crowned just before serving with a generous swirl of olive oil that pooled on the bottom of the bowl as I ate. (The keys, Talmor explained, are high-quality tahini imported from Israel and a multiple-day soaking process that removes the skins from the garbanzo beans, yielding a smoother texture.)

If you aren’t too full from salad and hummus — everything scooped up with luxuriously thick wedges of hot pita from the San Bruno-based Hamati Bakery — there’s plenty more to explore: A chicken tagine featured fluffy couscous, tender boneless chicken thighs, and a chermoula-style green hot sauce with a real kick. And don’t leave without trying whatever sweet treat Talmor, a former pastry chef, has whipped up. A soft almond cookie with a crescent of juicy apricot wedged on top, like a cat’s eye, made the perfect ending to a meal.

For such a casual restaurant, Ba-Bite stands out for its attention to the little details: the prettiness of the way each dish is plated, and the fact that the food is served in simple ceramic bowls, as though for a proper family meal. If “Ba-Bite” is meant to evoke home, it feels like a warm and cheery home indeed.

While Ba-Bite is notable for its Slow Food aesthetic, Oasis Grill is your straight-up, classic Middle Eastern deli. When the folks behind Temescal’s popular Oasis Food Market first announced plans for the Adams Point location, they said they wanted it to be a higher-end Mediterranean restaurant that would be integrated with the hookah lounge upstairs. That vision never materialized; instead, what opened in late April was a smaller-scale version of the original Temescal market, minus the grocery store component.

And that’s a wonderful thing: God bless the deli counter at the original Oasis Food Market, where the deliciousness of the food is rivaled only by how confused, and almost aggressively inefficient, the service is — and where twenty- or thirty-minute waits seem unavoidable. At the new Oasis Grill, the shawarma and falafel are just as tasty, but the servers are all smiles, and the food comes out promptly (sometimes with a couple of extra falafel balls thrown in if there’s a modest delay).

The menu is limited, basically, to falafel, shawarma, and a couple of kebabs, plus a cold deli case stocked with salads and other Mediterranean staples: olives, stuffed grape leaves, and assorted dips, including a smoky, velvety-light baba ghanoush that might be the best version of the traditional eggplant spread that I’ve had. The hummus is good, too — smooth and flavorful — but suffers a bit in comparison Ba-Bite’s otherworldly version. And the indifferently reheated pita verged on dry, even though the house-baked bread is one of the Temescal market’s calling cards. I have yet to see the “Fresh Pita Bread” light turned on at the new location.

There are two main reasons to make a special trip to Oasis Grill. The first is what is probably my favorite falafel in town — intensely garlicky and light-textured, with an impeccably crunchy, sesame-seed-encrusted exterior crust. I like to devour these while they’re piping-hot, adorned with just a drizzle of tahini sauce. (In a similar, deep-fried vein, try the samosas, which are the triangular, thin-wrappered variety. They’re fantastically crispy with a surprising chili kick.)

The other highlight is the shawarma, which is prepared in the traditional way, with slices of meat and fat stacked on a rotating vertical spit, where it roasts slowly over the course of the day, the cooks cutting off shavings to make sandwiches or shawarma plates as needed. It’s a trickier method to get right compared to the ubiquitous Kronos processed-meat cone, mainly because the meat has a tendency to wind up dry.

The key at Oasis, it seems, is that the meat shavings are tossed in some combination of savory meat juices, rendered fat, and diced tomato after they’ve been sliced off the spit, at which point they’re topped with a yellow, vaguely aioli-like mystery sauce. The result is well-charred, but admirably juicy — great in a sandwich or on top of French fries, and even better over rice. Usually the restaurant has one spit going at a time, so you may only have the option of the lamb and beef shawarma or the chicken shawarma, not both. You can’t go wrong either way.

And, as was the case at Ba-Bite, don’t neglect to pick up some small, sweet thing for dessert. The various house-made baklava and other flaky filo-based pastries at Oasis are unrivaled — not tooth-achingly sweet, but decadent enough to be an indulgence.