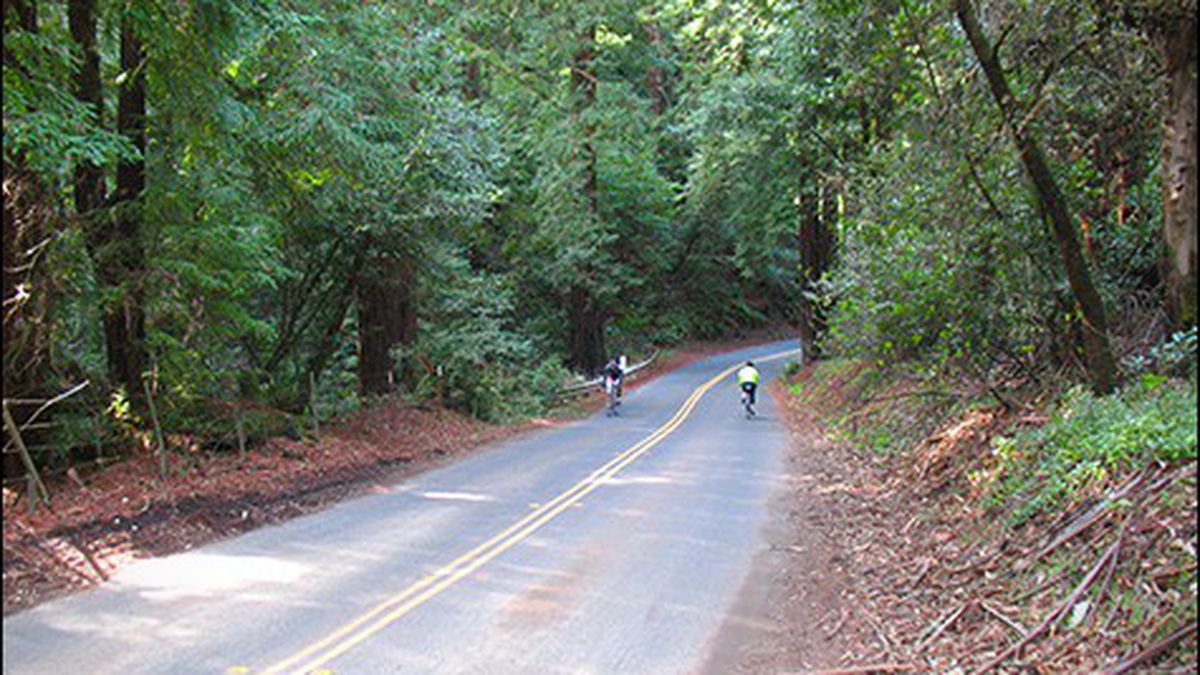 Rolling Through the Backwoods

Bike to an East Bay town that feels as if it's hundreds of miles away.

There’s a town in the East Bay with no shops, no cafes, and no restaurants. There’s not even a bar. And yet it’s totally worth visiting, mostly because it’s nestled in a majestic redwood forest that will remind you of Humboldt and Mendocino counties, or perhaps, the Santa Cruz Mountains. And it’s just a short distance from Oakland.

The town is Canyon, and it’s located almost directly behind Redwood Regional Park on Pinehurst Road, not far from Moraga. The winding road to Canyon is a picturesque drive, but the best way to explore it is by bike. Rolling through the redwoods and ferns and past wildflowers that are just now starting to bloom, you’ll feel as if you’re hundreds of miles away from the bustling city.

To get there from downtown Oakland, head up Park Boulevard, and then connect to Mountain Boulevard in Montclair. Then pedal south on Mountain to Joaquin Miller Drive, but instead of taking that steep ascent up the hill, head through Butters Canyon via Burdeck and Butters drives, which is a much prettier — and easier — route to the top of Joaquin Miller. Once on Skyline Boulevard, continue south to Redwood Road and turn left, heading east toward Contra Costa County.

You’ll immediately plunge into a redwood forest, with Redwood Regional Park on your left and Anthony Chabot Regional Park on your right. At the bottom of the hill, bear left onto Pinehurst Road. You’ll then gradually climb uphill though an oak and savannah woodland until you reach a crest with views of the Upper San Leandro Reservoir watershed and the Contra Costa County hills in the distance. Then you’ll descend into another redwood grove on your way to Canyon, which is on Pinehurst just past Canyon Road.

In the 19th century, Canyon was a logging town, but by the 1960s, it had become a popular hangout for East Bay hippies and back-to-the-landers. Since then, the number of people living there has dwindled, and today there are just a few dozen homes, along with a charming post office and a little elementary school. The rest of the area is mostly wildland owned by East Bay MUD and the East Bay Regional Park District.

If you’re in shape and feeling strong, you can get back to Oakland quickly by heading north on Pinehurst up past Huckleberry Botanic Regional Preserve to Skyline Boulevard. From there, you can coast through Shepherd Canyon and back to downtown. Or, if you’re not feeling that ambitious, you can backtrack a bit from Canyon and head south to Canyon Road, and then east to Moraga, through rolling oak-studded hills and grasslands and past the Valle Vista Staging Area. Once in Moraga, connect to the Lafayette-Moraga Regional Trail in Moraga Commons Park. From there, it’s an easy, downhill ride through oak and bay forests to the Lafayette BART station, where you can catch a train back to the west side of the hills.

It’s a great day’s ride — just remember to bring snacks, water, and a tire repair kit. You wouldn’t want to get stranded in a backwoods town that has no cellphone service.

Or maybe you would.