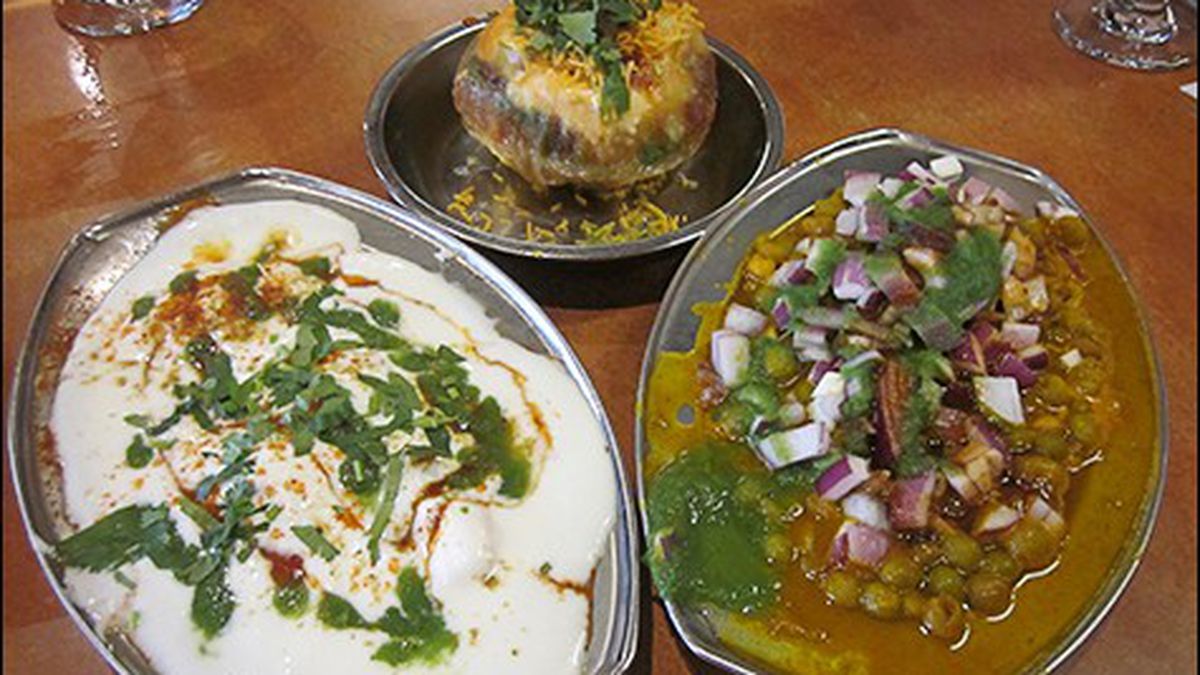 Most chaat fiends think of Vik’s Chaat & Market in Berkeley as the go-to spot for the Indian street food snacks, but the best chaat in the East Bay is actually in Fremont. Chaat started gaining mainstream popularity in Berkeley in the early 2000s, but recently, Fremont’s growing Indian population has shifted the chaat epicenter. With ten restaurants specializing in the savory treats, Fremont beats all other East Bay cities both in terms of breadth and depth of chaat offerings. Here are four places that are worth the trip:

I would argue that the hole-in-the-wall atmosphere at this small chaat cafe-cum-Indian video store, where fluorescent lights shine down on customers and Bollywood movies blare in the background, is part of its charm, but regardless, the food more than makes up for any perceived shortcomings of the ambience. The owners defected from Fremont chaat mainstay Chaat Cafe, and opened their own place last year. While the family-run restaurant excels in making all the chaat staples, its chole bhature is superb. The bhature, a large balloon of deep-fried bread, served alongside chole, or spiced chickpeas, is just the right combination of doughy and flaky. Another excellent item is aloo tikki chaat: spicy mashed potatoes fried to a crispy consistency and smothered in a well-balanced, savory and sweet layer of mint and tamarind chutneys; yogurt; onions; cilantro; chickpeas; and chaat masala, an amalgamation of spices including dried mango powder, cumin, coriander, black salt, dried ginger, chili powder, and the spice asafetida. Chaat dishes are meant to be snacks, so they are typically served as small plates, but at Taj-e-Chaat the portions are huge and the prices cheap — a meal for three costs about $14.

This small chain has a Berkeley location, but its Fremont venue is worth checking out. One of the city’s first chaat restaurants, Chaat Cafe has been around since 2001, and it remains popular despite all the upstarts. According to the manager, the papri chaat is one of the restaurant’s most popular dishes, and it’s easy to see why. The house-made fried wafers were deliciously buttery and topped with garbanzo beans, diced potatoes, onions, and cilantro, and coated in a sweet-and-tangy mixture of yogurt and tamarind chutney. The samosa chaat is just as tasty. No matter where you are on the spectrum between Indian-food newbie to connoisseur, you likely love samosas, but if you haven’t had yours cut into pieces, served on top of spiced chickpeas, and covered with onions, cilantro, yogurt, tamarind and mint chutneys, and chaat masala you haven’t been eating them right. The paneer pakoras, or cubes of cheese deep-fried in chickpea batter, are also far better than average. Unlike other restaurants, Chaat Cafe doesn’t over-fry its pakoras, so instead of being chewy, they have a crisp outer coating that nicely contrasts the moistness of the cheese.

Chaat Bhavan’s owner opened the restaurant in 2009 because he saw a dearth of Indian vegetarian cuisine in Fremont. Five years later, the slightly upscale, consistently packed joint offers a wide variety of options, but chaat is king. Two of the best items are the pani poori and dahi bateta sev poori, both excellent in large part due to the pooris themselves: freshly made, perfectly crunchy, puffed crisps made from whole-wheat flour. Pani poori (also known as gol gappa) is a DIY dish, but it’s worth the effort. Punch a small hole through the top of the poori, then add potatoes, chickpeas, sprouts, onions, tamarind chutney, and sev (thin, crunchy noodles seasoned with turmeric and cayenne), pour in a small amount of tamarind-mint water, then pop the whole thing in your mouth. Although a bit salty, the water had a great tangy and spicy aftertaste. In the dahi bateta sev poori, the pooris were also filled with potatoes, chickpeas, onions, cilantro, and sprouts, but were generously doused in yogurt and topped with mint and tamarind chutneys, sev, and chaat masala. If ordered with the pani poori, the sweet and savory tastes offset each other nicely.

Chaat House is noteworthy for offering one of the most delicious, yet hard to find chaat items: dahi vada. A donut-shaped fritter made from ground lentils, the vada is soaked in thick yogurt, drizzled with tamarind chutney, and lightly dusted with red chili powder. Vadas are often fried for too long, making them overly firm, but Chaat House achieves the right texture, soft and moist. The other must-order item on the menu is the bhel poori, the most basic chaat staple. It’s not a complex dish — a combination of puffed rice, potatoes, onions, sev, cilantro, fried wafers, and chickpeas —but the key is having fresh ingredients and the right proportion of the mint and tamarind chutneys. At Chaat House, the ingredients are well mixed and evenly spiced, and, most importantly, the puffed rice, sev, and fried wafers maintain crispness.

Unfortunately, the chaat stand at New India Bazar (5113 Mowry Ave., Fremont) was temporarily closed while I was writing this story (it re-opens on February 27), but it merits a mention for serving the best and spiciest pani poori in the Bay, each one made to order.