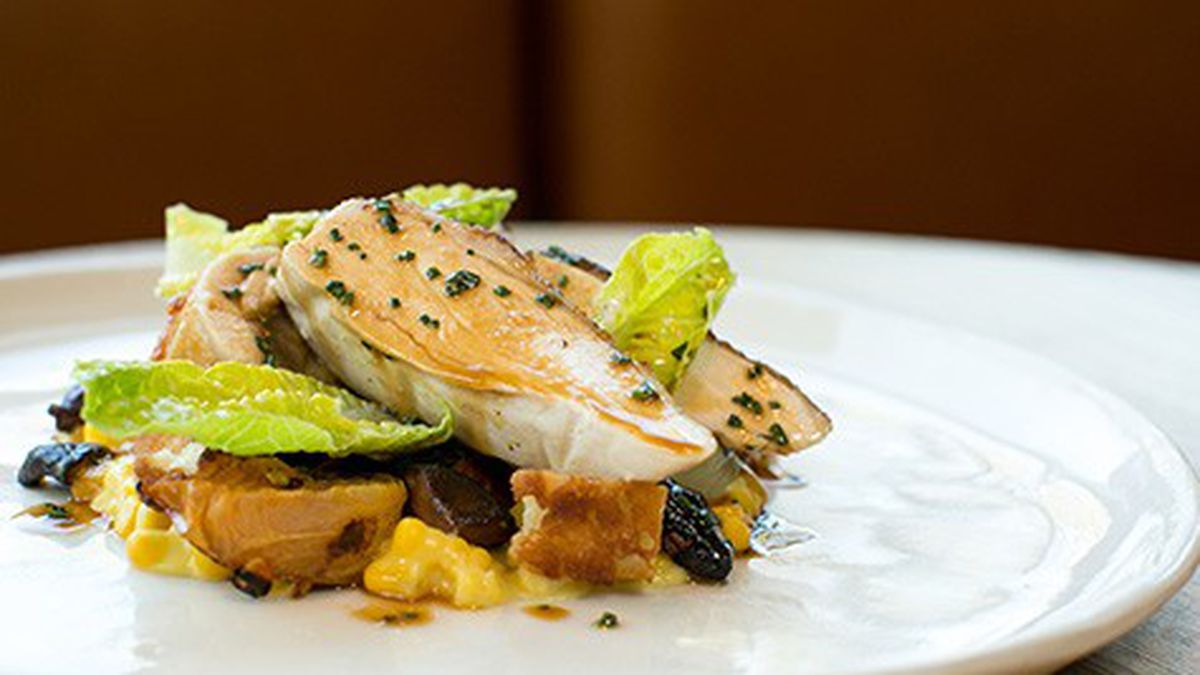 The last time I ate at Haven, Daniel Patterson’s handsome, high-ceilinged restaurant in the Jack London district, it was the Oakland food scene’s shiniest new plaything, and my wife and I dropped $160 on a special-occasion dinner for two.

Like Patterson’s other Oakland outpost, Plum (now Plum Bar), the restaurant has spent the last couple of years tweaking its identity. Would the place attract enough hedonistic high-rollers who would splurge on chef Kim Alter’s ambitious, improvised tasting menus? Would a family-style prix-fixe menu be more to the waterfront crowd’s liking?

If the direction that current chef Charlie Parker has taken is any indication, none of those approaches hit it out of the park. (The success of Commis notwithstanding, maybe Oakland just isn’t a tasting menu kind of town.) So Haven has gotten more casual. As before, the focus is on high-end, modern California cuisine — playful reinterpretations of dishes such as an heirloom tomato salad or a roasted chicken. But the restaurant is now also the kind of place in which you can sit at the bar and order a burger.

It is a tricky line to straddle — balancing the weight of the finicky gastronome’s expectations with the regular Joe’s disdain for preciousness. For the most part, Parker, who shares his jazz musician name-mate’s talent for bold, whimsical riffs, manages to pull it off.

Take the burger, which is made up of the kind of thoughtfully chosen components that befit its $16 price tag: high-quality sharp cheddar; a tangy rémoulade made with a purée of smoked scallions; and a beef patty that was pink all the way through, and as thick as it was chin-dribblingly juicy. Best of all was the buttery, house-made, sesame-and-poppy seed bun — rich and eggy, but also light and airy. It’s a fancy burger, but not too fancy. The thin, house-made pickle rounds aren’t so different from the kind you might buy in a jar, but the smoky Nueske’s bacon is available at good butcher shops. (I could take or leave the side of fried fingerling potatoes, which were too dry and bland to be enjoyable.)

Part of the idea, Parker said, was to make Haven more accessible to the younger after-work crowd — folks who’d like to swing by to have a cocktail, but might have found the old menu intimidating or overly expensive. Now, there’s a separate “bites” menu that features snackier items such as chicken wings and pâté. Fried peppers (padrons and sweet, red Jimmy Nardellos) were blistered and tossed in crunchy sea salt and basil-bud vinegar, which added a brightness that perked up my palate. A $6 bowl was generously sized enough for us to munch on throughout dinner.

If you were a fan of the labor-intensive, multiple-component dishes that the old Haven was known for, you’ll still find plenty to like. You may recall that Parker presided over Plum during its earliest, most glorious days — when the dining room was packed, and each dish that came out of the kitchen seemed more inventive than the last. His cooking at Haven still has that playfulness, and while the service is much more casual, each time a dish is plated you’ll still see four chefs huddle around like surgeons performing a delicate operation.

My favorite dish during a recent visit was the “Parisian dumplings”: crisp-edged, tarragon-flecked pillows of pâte à choux — basically pan-fried, potato-free gnocchi. Underneath was a ratatouille-like tomato and eggplant sauce. On top was a “fried egg emulsion”: fried egg and burrata cheese that had been puréed, loaded into a siphon canister, and then shot out as a kind of frothy, savory whipped cream that blanketed the dumplings. A sprinkle of crunchy dehydrated Kalamata olive bits provided one last space-age touch. When mixed together, though, the result was pure comfort.

Likewise, the roasted chicken was an amalgamation of comforting American flavors and the kind of exceedingly complicated cooking process that few home cooks would attempt: meat deboned, legs rolled into a roulade, white and dark meat cooked in separate temperature-controlled water baths, and so forth. (Only the breast actually gets roasted, to order, just to crisp up the skin.) What you wind up with, basically, is a killer chicken salad — slices of tender chicken tossed with lettuce and seared tomato slices, served over a bed of delicious creamed corn and buttery sautéed shiitake mushrooms. My only complaint: The chicken portion was skimpy for the price.

It’s worth noting that Haven’s menu descriptions — simply a list of each dish’s primary ingredients — tend to mask the creativity of the cooking. That minimalistic style is a hallmark of Patterson’s restaurants, but here, the ingredients tend to be commonplace things cooked in interesting, skillful ways. For instance, “Roast chicken, corn, shiitake, green tomato, gem lettuce” sells the dish short. Don’t be afraid to ask your server lots of questions before ordering.

Haven is also a gorgeous place to have weekend brunch, especially out on the patio or at one of the many window seats, facing out toward the boats on the water on a sunny day. Food-wise, there aren’t many bells and whistles at this time of day. Instead, you might start your meal with an elegant take on avocado toast: a whole pickled sardine fillet, chunky, fork-smashed avocado, and good olive oil over thick focaccia. Also lovely: a breakfast version of pork and beans, featuring tender slices of surprisingly lean pork shoulder, black-eyed peas, a runny-yolked fried egg, and a spicy-sweet red pepper relish. And while the “johnny cakes” didn’t differ much from regular buttermilk pancakes, they were notably fluffy and dotted with poppy seeds, and Parker fries them in bacon fat the way his Alabama-born grandmother used to.

Not every kitchen trick requires high-tech gadgetry, after all.