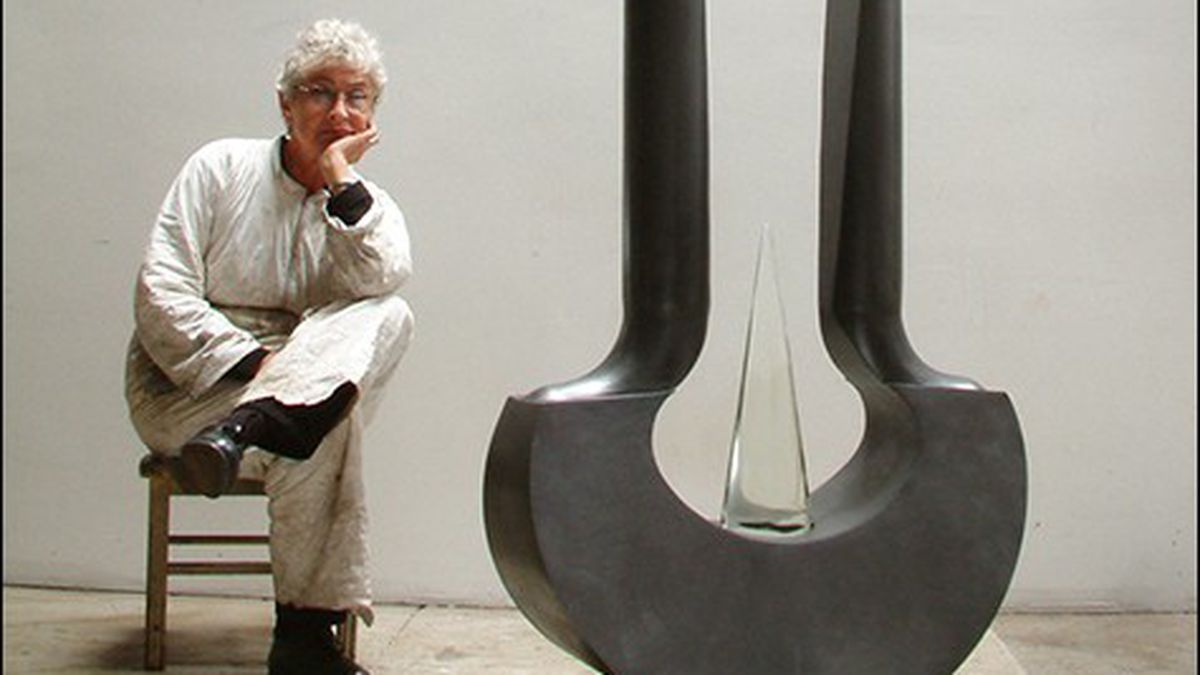 Reflecting on the Work of Bella Feldman

A retrospective of the prolific Bella Feldman rounds up fifty years of her playful-yet-pessimistic sculptures, paintings, and collages.

Bella Feldman’s work prompts reflection upon life and society with the same degree of intrigue and entertainment as a good science fiction novel. Her sculptures conflate aspects of the realistic and the whimsical in a way that prompts poignant comparisons. One of her sculptures alone would allude to a surreal landscape where life manifests itself in massive steel metaphors. The survey of her work, now on view at the Richmond Art Center, invites viewers to enter that landscape, immersing them in a vast collection of Feldman’s mixed-media sculptures, paintings, and collages that overflow out of the gallery space.

Previously a professor of sculpture at California College of the Arts, Oakland-based Feldman has been creating for fifty years now, and this is the first retrospective of her fruitful career. Although her work has varied some in form and medium, her recognizable dark humor pervades every piece.

Centered in RAC’s gallery is Feldman’s sculptural series War Toys Redux, which first lures in viewers with enticing form, then stabs at them with pessimistic snark inspired by the Gulf War. Arranged in triangle formation like a fleet of industrial insects, these low sculptures combine violent weapon-like forms of steel with eerie mad-scientist shapes of glass. They are akin to the contents of a warlord’s Freudian dreamscape, ironically emphasizing the fetishization and playfulness of war. At the same time, they comment on the average American’s heavily mediated experience of armed conflict, and our resulting inability to distinguish between myth and reality in regards to it.

On the gallery walls above hangs another series entitled Flasks of Fiction, which is less overtly political, but equally as affecting. Inspired by lanterns in Turkish mosques that Feldman encountered during her extensive travels, the torso-sized sculptures hang in groupings, with lights above echoing threatening silhouettes of their forms. Each involves a sadistic-looking steel harness encasing a fluid glass form that seems to take its shape from its constraints. Although elegant in execution, the pieces manifest the uncomfortable tension present in relationships of vulnerability and dominance, a subject consistent throughout Feldman’s career.

The works in which Feldman combines steel and glass stand out among the 85 pieces chosen for the show, as they repeatedly renegotiate the correspondence of force and fragility. “War Horse,” a large sculpture from the series War Toys III, a collection with which Feldman revisits her “war toys” theme on a blown-up scale, imposes on the viewer with its heavy wheels and thick, arching neck. From its highest point, however, hangs a graceful glass droplet — an Achilles heel. With Feldman, there is never just one side to the argument. Bella: A 50-year survey of the work of Bella Feldman demonstrates her keen ability to maneuver between dichotomies, creating poetic works of hard-hitting social commentary.