.Oakland Aims to Allow Food Trucks to Operate All Over the City

After years of delays, the city takes a significant step toward creating an expanded, permanent mobile food vending policy. 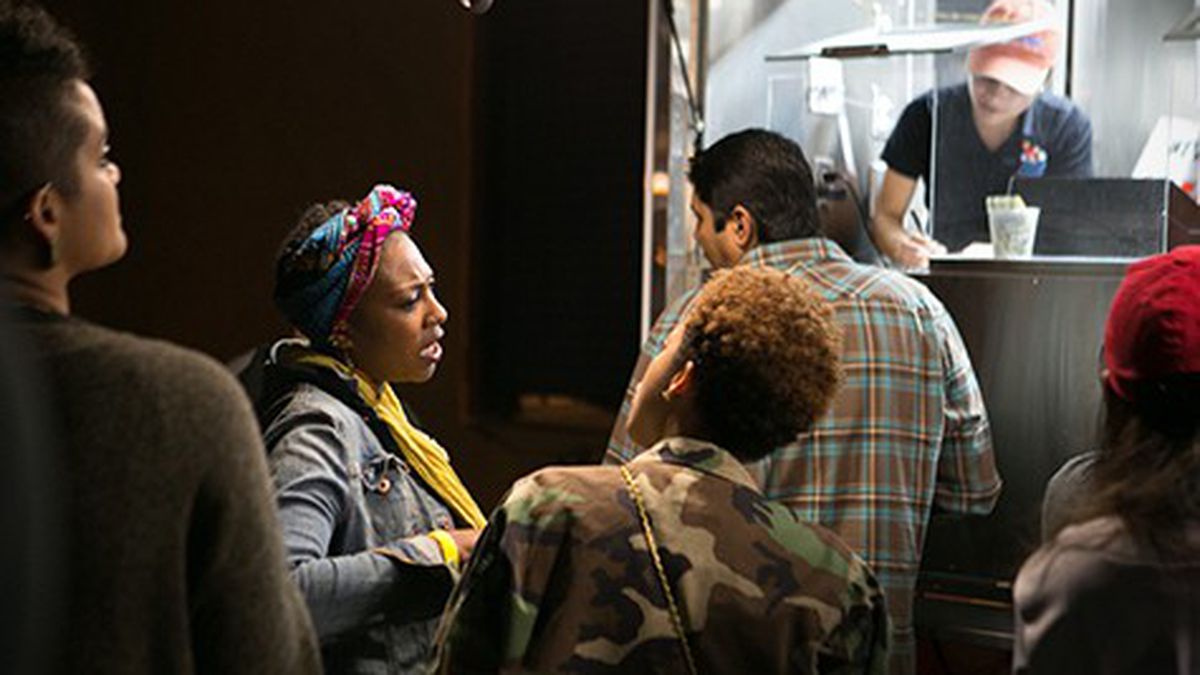 Off the Grid-style mobile food gatherings might have taken the Bay Area by storm, but here in Oakland, the food truck revolution hasn’t gained much traction. It’s been limited, for the most part, to East Oakland’s vaunted taco truck scene and a handful of high-profile events elsewhere in the city.

But all that may be about to change. The city recently unveiled a proposal for a new mobile food policy that would greatly expand opportunities for local food truck operators.

In theory, your favorite Fruitvale taco truck would now be able to set up shop on, say, Piedmont Avenue. And it would become much easier for individual food trucks to get permission to pull up to a metered parking space in Oakland to do business, the way they do in other cities that have a vibrant street food culture.

Gail Lillian, proprietor of Liba Falafel and a pioneer of Oakland’s recent gourmet food truck movement, said she was impressed that the proposal doesn’t “over-legislate the process,” forcing mobile food entrepreneurs to jump through unnecessary hoops. In an email, Lillian wrote, “Oakland has written a permit process that treats food trucks like any other legitimate business, deserving of opportunity, instead of treating them like entities that should apologize for their business models.”

That said, Lillian also acknowledged that Oakland is very late to the game in terms of creating a comprehensive food truck policy. (The Express has documented the often painfully slow process since at least 2011.)

Mobile food advocates might argue that the current proposal is some ten years overdue, given that the pilot program that provided legal sanction for the Fruitvale district’s vibrant pushcart and taco truck scene — but restricted it to a narrow strip of land along International Boulevard — hasn’t expanded to other parts of Oakland since its creation in 2001. And while “food pods” — i.e., clusters of three or more trucks that convene weekly at an approved location — have been legal in Oakland on a limited basis since 2012, you can count on one hand the number that have really caught on. Contrast that with a city like Portland, which has nearly fifty active food pods.

It’s not for a lack of desire. For the past five years, officials in Oakland’s Planning Department have spoken of their intent to create a permanent, all-encompassing mobile food policy for the city, and have at various points conducted surveys designed to kickstart that process. And yet prior to this new draft policy, there had been little tangible progress.

Devan Reiff, the city planner who was tapped last year to spearhead the development of a new policy, said there have been many reasons for the delay. City planners working on the mobile food policy kept getting pulled off the job to deal with higher-priority matters. In addition, planners kept getting bogged down over the lack of any viable mechanism for the enforcement of mobile food regulations — beyond the unlikely prospect of dumping another responsibility on the city’s overstretched police department. Under the new proposal, the task of enforcing food truck regulations will be assigned to newly budgeted positions in the City Administrator’s Office, Reiff explained.

In any case, the proposed changes are sweeping. Perhaps most significantly, the areas in Oakland where individual food trucks that aren’t part of a weekly food pod would be greatly expanded beyond International Boulevard’s lonchera corridor, and would include all of the city’s major commercial districts — including downtown, Temescal, Rockridge, Piedmont Avenue, and beyond. That means that individual trucks such as Liba Falafel will be free to do what they’ve never been able to do before legally: to, for instance, pull up to a metered parking space in downtown for a couple hours of lunch business, provided that they adhere to some basic restrictions with respect to distance from schools, restaurants, and other mobile food vendors.

The new policy would also mean that taco trucks in Fruitvale would now have a viable way to expand their operations beyond East Oakland — either with a setup similar to what you typically find in Fruitvale (i.e., in private lots) or, again, parked at a meter. In addition, the city’s food pod program would be expanded, allowing each individual pod organizer to run five different weekly pods (instead of just two). What Reiff described as “Portland-style” food pods — a group of trucks or carts set up on a permanent basis on private property —would also be permitted.

Karen Hester, who organizes the Bites Off Broadway and Bites at the Lake food pods — both currently on hiatus for the winter — said that while the new proposal is a big improvement on the city’s existing mobile food regulations, she still finds the language in the draft policy to be too restrictive and “nitpicky.” Hester took particular issue with the blanket restriction against food trucks selling alcohol, which she said could be a deciding factor in whether she continues to operate her Lake Merritt food pod.

Mobile food entrepreneurs, brick-and-mortar business owners, taco enthusiasts, and various other stakeholders will have until February 19 to submit preliminary feedback on the city’s draft proposal by emailing Reiff at [email protected]. After that, Reiff will write a draft of the actual ordinance, which he hopes will be ready to be reviewed by the planning commission in late April or May. From there, the law would need to be discussed at two city council meetings before getting passed into law.