.At The Snack Shack, Almost Everything Is Deep-Fried and Gluten-Free 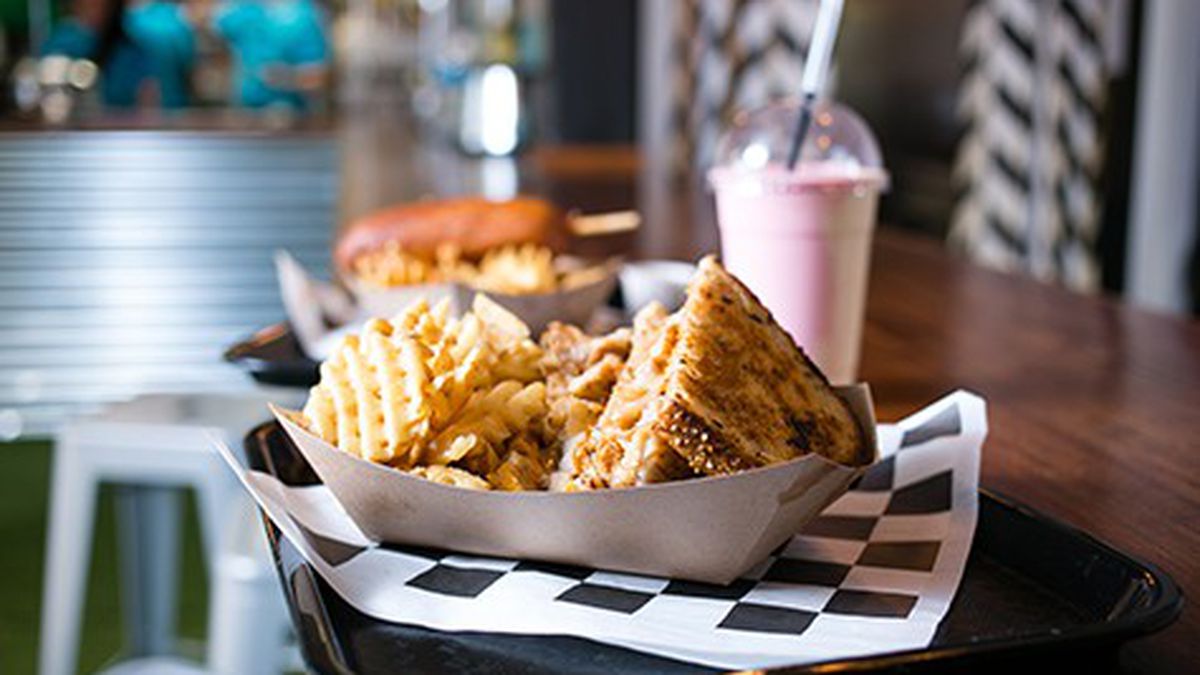 Let’s not bury the lede: This week’s review is about deep-fried candy bars.

With its food politics and pristine farmers’ markets, the Bay Area doesn’t tend to look favorably on this kind of gaudy, greased-up fare — the more populist dining tendencies of the typical undergrad notwithstanding. Here in the East Bay, anyway, we haven’t really had a restaurant that prominently featured fried junk food since the now-defunct Sumo Grub, which, until the downtown Berkeley eatery closed in 2013, had clogged arteries and attracted reality TV camera crews with its menu of tempura-fried things: fried Twinkies, fried pizza, fried mac ‘n’ cheese — you name it. But whereas Sumo Grub seemed to embrace its identity as a purveyor of glorified stunt food, The Snack Shack has somewhat broader, loftier ambitions.

So, yes, brave souls can come here to indulge in batter-fried Milky Ways, but the menu is also dotted with seasonally specific salads and even the occasional French cooking term. This is still Berkeley, after all.

Located on the north side of campus, The Snack Shack occupies a garage-like space inside the Hearst Food Court — one of several clusters of mostly Asian restaurants around campus that have long served as “Fallback Dinner Option Number One” for frugal Cal students. With its AstroTurf-like fake-grass carpet, abundance of corrugated metal, and prominent flat-screen TV, The Snack Shack resembles a nice-ish sports bar more than it does, say, a literal shack.

The proprietors of the three-month-old eatery are first-time restaurateurs Rachel Spector and Scott Wortmann, the latter of whom is the main chef and handles most of the day-to-day operations. Their idea was to serve updated versions of “ballpark style” food, as well as a hodgepodge of the kinds of dishes you’ll find at diners, dive bars, and county fairs — burgers, corn dogs, waffle fries, buffalo wings, fried cheese sticks, and so forth.

Ultimately, it’s gussied-up comfort food — but much of it is tastier than you might expect. The pork belly Reuben featured all of the classic flavor components: the sauerkraut, melted Swiss, grilled rye bread, and tangy Russian dressing. But the use of pork belly (slow-roasted; sliced into girthy, uniform slabs; and seared on the griddle) in place of corned beef proved to be more than just a put-bacon-on-everything gimmick. The sandwich was a little less salty and a lot more tender and unctuous than most traditional versions.

Anything with that pork belly is likely to be good. During one visit, the daily special was a pair of pork belly schnitzel pretzel-stick sliders (a string of words I had to re-read several times). If anything, this was even better than the Reuben: The belly had been breaded and fried (hence, the “schnitzel”), then placed, along with a smear of mustard and some arugula, on a salt-studded soft pretzel that had been sliced in half to form a “slider” bun. Despite the outlandishness of the premise, it was a fairly straightforward — and straightforwardly delicious — sandwich.

Meanwhile, the corn dog I tried was an excellent exemplar of the genre, with a corn flour-based batter that wasn’t overly heavy or thick, and clung fastidiously to the juicy pork andouille sausage within. Like many of the dishes on the menu, the corn dogs also happen to be gluten-free. (More on that in a second.)

If you aren’t counting calories — and, let’s face it, what’s the point if you’ve come this far? — you’ll want to wash your meal down with one of The Snack Shack’s excellent milkshakes, which are made with Dreyer’s vanilla ice cream blended with however many house-made syrups and mix-ins you’d like. I’m a sucker for a thick milkshake, and these were thicker and more satisfying than the shakes at far tonier burger joints. The strawberry and peanut butter shake made for a particularly great combination. There’s even a milkshake happy hour, a promotion I’ll henceforth demand — or at least politely request — at all of my favorite diners and ice cream parlors. (Thanks to The Shake Shack’s newly-acquired beer and wine license, the shake discount — fifty cents off — is now folded into the restaurant’s broader 3–6 p.m. happy hour.)

Given the aforementioned schnitzel sliders and deep-fried candy bars, it’s easy to peg The Snack Shack as a disciple of the Food Network frat-bro-in-chief Guy Fieri’s school of melt-your-face-off stunt food. But there’s an earnestness to the food that I found surprising. After all, one of the restaurant’s signature dishes is a lamb and goat cheese slider. The seasonal salad featured roasted butternut squash, candied pecans, and a thyme dressing. (It was pretty good, although I would rethink the inclusion of raw, fresh cranberries.) All this makes sense when you consider that before they settled into their food court location, Wortmann and Spector had originally planned to open a more upscale wine bar.

That sincerity comes across even in dishes that weren’t strictly successful. The most ambitious item on the menu is the shrimp roll — a play on a mini lobster roll, basically — that featured shrimp poached in a creamy beurre blanc sauce. The flavors were great, but nothing could save the fact that all of the shrimp were mushy. Likewise, The Shack Burger — topped with frizzled onion strings and a tangy “special sauce” — would have benefited from a higher-quality protein. This would have been a fine stand-in for an In-N-Out burger but for the fact that the beef itself was dry and oddly flavorless. When Wortmann later told me he was using pre-formed patties, it all made sense.

One thing that won’t be immediately obvious to most customers is that most of the food is gluten-free, to accommodate the fact that Spector (who is also Wortmann’s girlfriend) doesn’t eat gluten. In fact, the bread for the full-size burgers and sandwiches are just about the only thing on the menu that contains gluten. Even the sliders, served on house-made brioche buns, are gluten-free, and Wortmann uses breadcrumbs from those buns to bread his schnitzel.

The odd thing is that you’d never know that this was the case. Wortmann said he didn’t want to market the restaurant as gluten-free for fear that customers might be less inclined to try certain things — that the place might wind up marginalized in some kind of “gluten-free ghetto,” so to speak. It’s a fair point. Spend enough time eating, say, overpriced, overly “tweezified” bar fare, and the prospect of spending a week writing about weird fried food can seem oddly appealing. But would I still have made the trek up to Northside if I had known that all of that fried food was gluten-free? Maybe not.

Still, it would have been nice to be able to manage my expectations, so I wouldn’t be left thinking, after a follow-up phone interview with Wortmann, “So that’s why a handful of dishes were inexplicably terrible.” There’s no need to proclaim it from the rooftops, or to rename the restaurant “Shack of No-Gluten Snacks.” A brief note at the bottom of the menu would suffice so that gluten eaters won’t be flying blind when, for instance, they order a strawberry mini-doughnut that turns out to be chalky and artificial-tasting.

More importantly, a lot of people who don’t eat gluten would love this place, which joins North Oakland’s Grease Box in smashing the notion that gluten-free food must, by necessity, be a sad cuisine of self-denial.

After all, would you believe that even the deep-fried Reese’s candy bar was gluten-free? You wouldn’t think it from looking at the thing, served, as it was, on a stick — indistinguishable from a corn dog until you bite into its melted-chocolate, peanut-studded core. Sure, this isn’t anyone’s idea of gourmet cuisine, and, in all honesty, I couldn’t eat more than a bite or two. But if you don’t embrace that kind of oozy, deep-fried decadence at least once in your life, how can you say you’ve really lived?