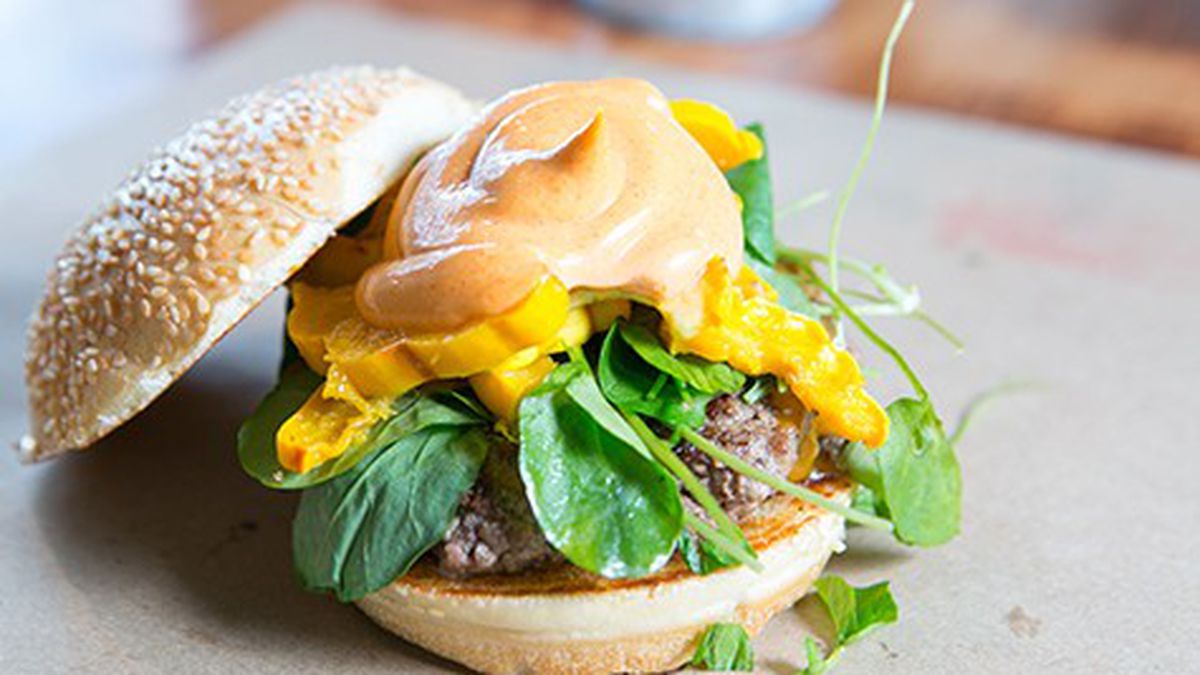 Fast Food Doesn’t Have to Be a Dirty Word

We live in Alice Waters country, where fast food is something of a dirty word. But two new East Bay burger joints are making it their mission to reclaim the genre — to demonstrate that “fast” doesn’t have to be synonymous with poor quality and questionable ethics. There’s nothing new about that idea, of course, but Farm Burger in Berkeley and Boss Burger in Albany manage to stand out in an increasingly crowded field.

Farm Burger is a small chain of farm-to-table burger restaurants based in Georgia, though the Berkeley branch — the first one to open outside of the South — is run independently and has a slightly different menu designed to put California ingredients to good use. Avocados get a lot more play, for instance.

The concept, at least according to a large poster on the wall, is “(Slow) Fast Food,” which is to say that just about everything is seasonal, sustainably sourced, and/or made from scratch in-house. Chef Jamie Lloyd buys grass-fed beef from BN Ranch, Bill Niman’s seasonal, uber-sustainability-minded boutique operation. (The restaurant buys from other local ranches during BN Ranch’s off-season.) Lloyd gets his pork and chicken from similarly impeccable sources, and he picks out most of his produce himself during twice-a-week trips to local farmers’ markets.

This is fast food that tells a story, and that you feel downright virtuous eating — and it comes with a reasonable price tag. In some cases, however, the flavor didn’t quite live up to the feel-good narrative.

The standard Farm Burger (No. 1 on the menu) featured a tried-and-true combination: aged white cheddar, caramelized onions, and the restaurant’s take on the standard fast-food-joint “special sauce.” But the one-third-pound BN Ranch beef patty, while admirably juicy thanks to the 25-percent fat content, was underseasoned and didn’t pack a lot of beefy flavor. It was a good burger, just not a particularly memorable one.

The chicken patties are made by grinding whole, deboned Mary’s organic birds, skin and all, in-house — a method that should appeal to anyone with an honor-the-whole-animal sensibility. The end result? A bit dry, with black pepper being the overwhelmingly dominant flavor. The toppings saved the day: a runny-yolked fried egg and some goat cheese for the chicken burger featured in that night’s hyper-seasonal “daily combo” ($10), which comes with fries and a drink. My least favorite burger, by far, was the “Pastured Pig,” whose patty was distressingly lean and dry, and had none of the decadent richness that is the entire point of eating pork.

Even if the burgers were a mild disappointment, Farm Burger has its charms. It could be that the dead of winter just isn’t the best time for the restaurant’s market-fresh approach to truly shine, yet the daily market salad — a simple mix of Little Gem lettuce, cannellini beans, roasted sweet peppers, and zesty mustard vinaigrette — wowed me all the same. (I gave the side-eye to the “superfood” salad option, with its threat/promise of nutritional yeast.) The milkshakes, made with Three Twins organic ice cream, were thick and classic. And the Southern-inspired snacks — boiled shell-on peanuts, fried chicken liver, and chicken-pot-pie “fritters” (like a fried meatball stuffed with diced carrots) — were appealing alternatives to standard-order fries and onion rings.

Oh, and there’s this: Farm Burger might be the kid-friendliest restaurant in town, with excellent “Lil Farmer” kids’ meals ($5), and a play area that’s more spacious than many cafes (and that comes equipped with a toy kitchen for the young Slow Foodist). A guilt-free fast food meal and wholesome fun for the tots? That alone is good reason to hope Farm Burger sticks around.

Over on Solano Avenue, Boss Burger is somewhat less overt about the mission-driven nature of its approach to fast food. The place has an all-American 1960s diner feel, down to its narrow dining counter, retro color scheme, and burger-themed logo loosely inspired by Warhol’s soup cans. You order at the counter, and if you don’t read the fine-print descriptions, the stripped-down menu looks no different from what you’d find at any run-of-the-mill fast food restaurant. If you’re ordering a burger, mostly you just need to decide whether you’d like a “single” or a “double,” and whether you’d like the house “Boss Sauce” to be spicy or not.

But this, too, is a burger joint that isn’t shy about the strength of its convictions — a fact that becomes evident as soon as you step up to order and see the all-bolded sign posted on the register, which warns customers that “BOSS FRIES ARE NOT VEGETARIAN.” They’re fried in 100-percent grass-fed beef tallow.

Boss Burger is a joint venture for Jon Guhl (who owns Little Star Pizza a couple doors down) and Ryan Murff, a former front-of-the-house guy at places such as Cafe Rouge and Oliveto. Murff is the one who developed the recipes and runs the day-to-day operations, and he explained that the decision to use beef tallow was motivated partly by flavor considerations and partly in order to stay consistent with the restaurant’s retro theme — harking back to a time when most fast food chains used beef fat. Mostly, though, Murff said he just prefers to use natural fats rather than genetically modified vegetable oils: “We just believe it’s healthier for you.”

There is an appealing simplicity to the sandwiches at Boss Burger. They all come in the same soft, compact bun, and they all reminded me of sandwiches I’ve eaten at big-box fast food chains — except tastier by several orders of magnitude.

The burger boasts a relatively small (3.5-ounce) Five Dot Ranch beef patty, ground in-house daily, with a whopping 30-percent fat content. It’s a juicy, sloppy burger — pink in the middle and packed with beef flavor, and garnished simply with pickles, shredded lettuce, griddled onions, and that tangy Boss Sauce. Murff said he wanted to offer an affordable ($6) burger that wouldn’t leave diners feeling sluggish, but if you’ve got a reasonably hearty appetite, do not hesitate to up-size to the double burger — and to add a slice or two of organic American cheese for good measure.

The other sandwiches were just as notable. The fried chicken sandwich featured a thin, peppery chicken cutlet — also fried in beef tallow — and a cabbage slaw. Ask for the sandwich with pickles, and you wouldn’t be remiss to compare it, favorably, to Chick-Fil-A’s signature Southern-style offering. And while I’ve not had much luck with veggie burgers in the past, Boss Burger’s won me over. Made with cornmeal, brown rice, cheddar cheese, and assorted vegetables, the house-made veggie patty had the half-mushy texture of a Korean pancake and, oddly, the fishy flavor of a crab cake or a Portuguese salt cod fritter — a strange but delicious combination.

As for those beef tallow fries, they were just okay. Freshly cut Kennebec potatoes were fried twice in the beef fat until they’d formed an exterior shell that was crunchy almost to the point of chewiness. They were more like miniature potato wedges than anything else. The flavor was good, though, and I’d be excited if Murff went back to his original plan: to serve crinkle-cut fries. (He cited a busted machine as the only reason for the change.)

The best side was the chili — a deep-red, old-school, all-beef version that had no beans whatsoever and a dried-chili base that Murff likened to a Mexican mole. Like much of the menu, it tasted like what it was: a throwback to simpler times.

Mua Is Nothing if Not Existential