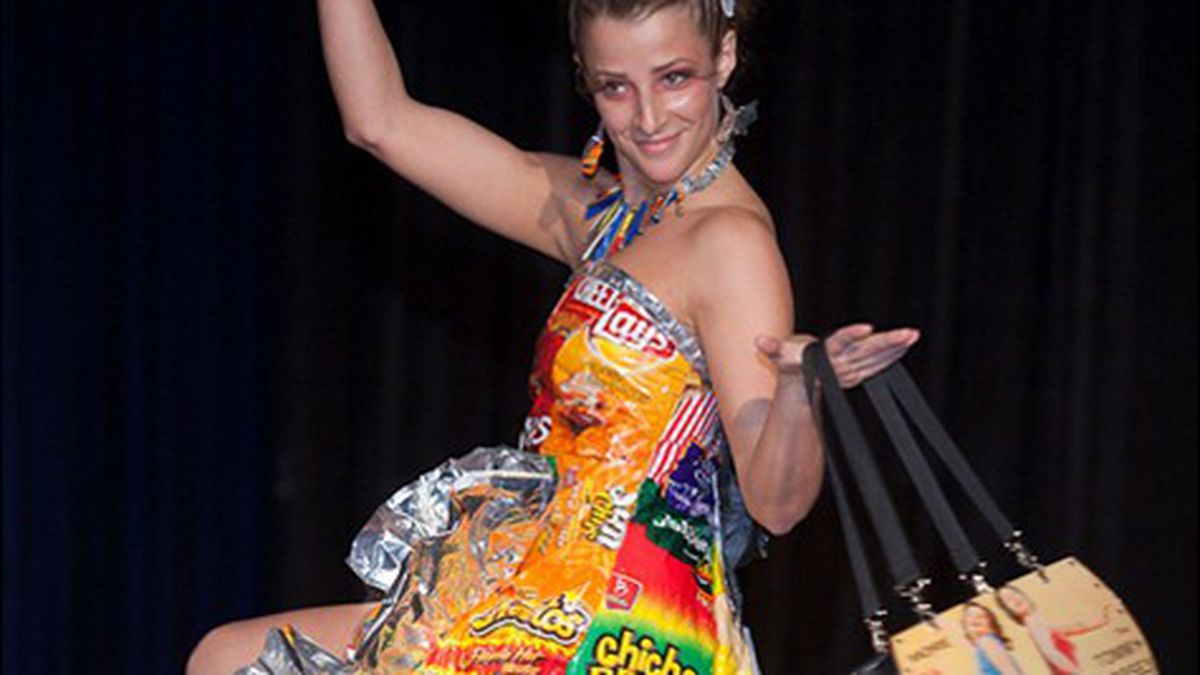 Waste Not, Want Not at Rhythmix Cultural Works

Recycling never goes out of style at the Make Do runway and gallery shows.

There’s probably no article of clothing more fleeting in functionality than a wedding dress. For all the agonizing hours and hundreds of dollars that can go into acquiring the perfect frock, once its wearer says, “I do,” the garment is essentially useless. Relegated to closet corners and thrift store racks, such ceremonial garb quickly collects dust and gradually goes out of fashion, such that, decades later, a contemporary bride-to-be would sooner don her birthday suit than wear the outdated dress to her own wedding.

Under the circumstances, you could call Jennifer Serr a dress resuscitator. A longtime clothing designer and patternmaker, Serr has taken antiquated wedding gowns and refashioned them for re-use. Working largely from thrift store scores, Serr severs unsightly shawls from the shoulders of otherwise flattering dress shapes, removes puffy sleeves from 1980s bridesmaids getups, and gives long-jilted garments a second life. “I’m rescuing garments that were either just hanging there or were heading for the landfill, and helping to pass them on,” she said. “It’s really amazing what can be done with something that appears so dated and ugly.”

A handful of Serr’s pieces, which she typically sells via Etsy, will hit the catwalk on Friday, March 9, as part of the opening night events for Make Do!, a recycled and up-cycled art and fashion show on display at Rhythmix Cultural Works (2513 Blanding Ave., Alameda) through Friday, May 4. For both the runway and gallery shows, artists were charged with creating repurposed or recycled clothing, housewares, and fine art from items culled from thrift stores, dumpsters, garage sales, and other sanctuaries for discarded stuff. Consequently, in addition to more utilitarian pieces by Serr and other designers, the fashions featured at the opening night runway show incorporate everything from potato chip bags to mini-blinds in their construction. Through such pieces, not only does fashion trump function, but the show’s underlying message — that old environmentalist mantra of “Reduce, Re-use, Recycle” — becomes clear.

“Make Do! is about showing people how to make do with what they have,” said Julie’s Coffee & Tea Garden owner Julie Baron, who helped organize and also contributed pieces for the show’s runway component. “If you have some items in your closet that you haven’t worn for years, you can you alter them for modern times, or find unusual pieces and use them in ways that you wouldn’t normally use them.” One could say that the show, which includes works by artists from Upcycle Boutique, Redux Studios & Gallery, and many others, is a testament to the fact that recycling never goes out of style. Opening reception (with libations and up-cycled and vintage fashion vendors) 6 p.m.-10 p.m.; fashion show at 8 p.m., donations accepted. 510-865-5060 or Rhythmix.org