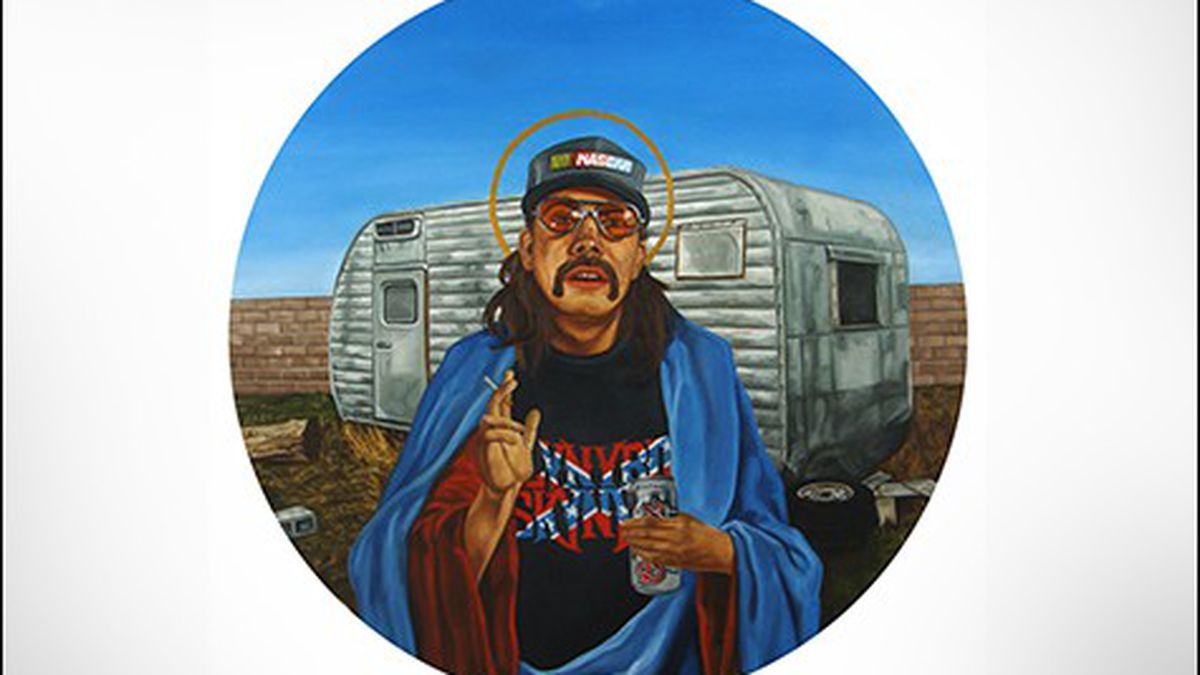 His social commentary solo show isn't for the religiously sensitive.

Peter Adamyan is not concerned with subtlety. His works are a social-commentary slap in the face. In his new solo show, Salvation Mini Mart, his primary condemnation is the ways in which he feels that religion is used as a political and capitalistic tool to promote personal interests and mass consumption.

To relay this message, the Oakland-based artist has transformed Loakal Art Gallery and Boutique (which was cofounded by the Express) into a convenience store parody stocked with commodities that overtly use religious rhetoric in their marketing. These include “Sacrament Crackers” (reminiscent of Ritz Crackers) and “Foreskin O’s” (which look like Cocoa Pebbles). The shelves are also lined with real products, like Hershey’s candy bars and Hamburger Helper, to imbue the scene with a sense of realism. But the satirical elements are obvious, and are supplemented by shelves that resemble church windows and a mural of a large, red cross with the word “consume” running down it.

What Adamyan lacks in subtlety, he makes up for in wit and technique. The works that shine are relief oil paintings done on hand-shaped wood cutouts. Among these are six portraits of Jesus, each dressed in a different costume, with the words “Jesus Saves” colorfully emblazoned at the bottom. In “Jesus Saved Me From Speeding,” the religious icon sports a police uniform, while in “Jesus Saved Me From the Fire,” he wears a fireman’s suit. The identical silhouettes and intricately painted features of each make the figures a sincere and compelling provocation as they hover on the white wall in a pyramid formation.

At the reception of the show, Adamyan told me that he didn’t go to art school because he didn’t want to give his hard-earned money to the capitalist machine for something he could teach himself. It’s clear that he’s committed to his political beliefs, and it shows in his work. “Holy War,” for example, is a sardonic pastiche of religiopolitical imagery that forms a cynical emblem of our current international state of affairs. Among other elements, the goddess Shiva holds a grenade and a 7-11 Slurpee on one side, Jesus wears a camo-patterned robe and bears a handgun on the other, and missiles take off in the background. With an almost pop art, photo-realistic style, the piece arrests the viewer with sacrilegious audacity and unnerving connotations.

Many of the works within Salvation Mini Mart could be considered highly offensive, subverting beliefs and icons that many consider profoundly sacred. Adamyan knows this, and it’s the uncompromising and blatant nature of his work that makes it remarkable. By ignoring the sensitivities of others, Adamyan boldly employs the same sense of hyper-individualism that he criticizes in his work, ironically relying on the foundation of American ideology that’s responsible for creating what he hates, in a merciless and effective taste-of-your-own-medicine manner.