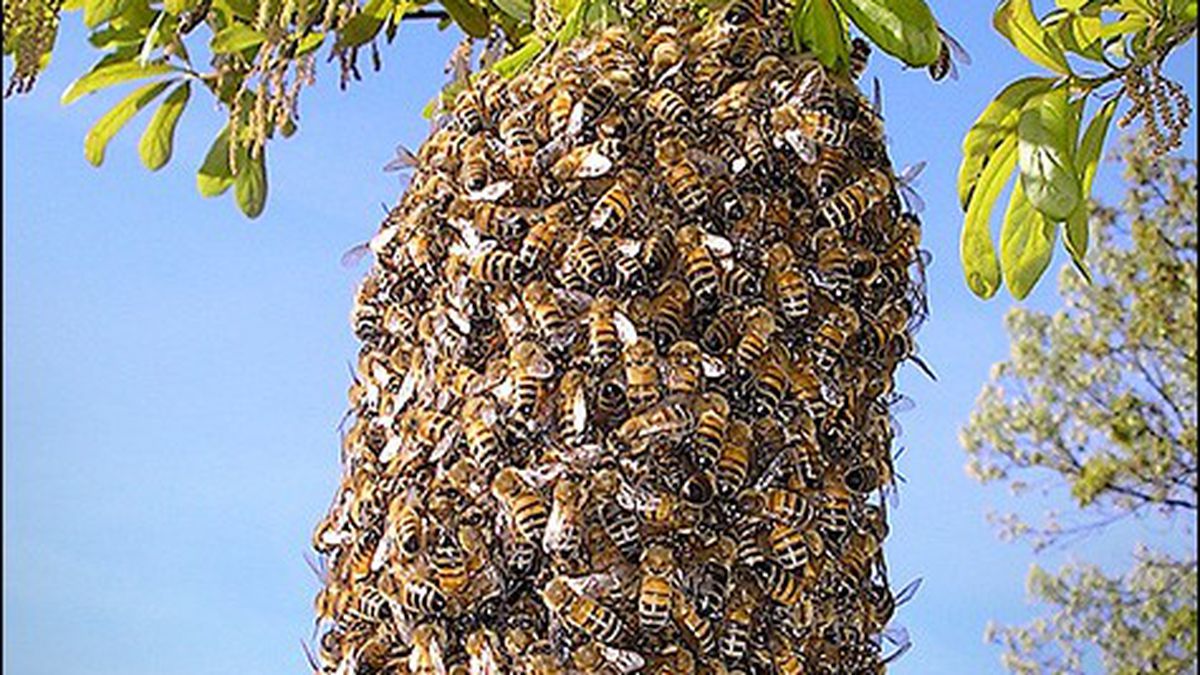 Bee swarms can be sweet — for humans and bees alike.

During the first warm days of spring, when the flowers start blooming, bees begin to swarm, and this is a good thing. Swarming is how bees produce new colonies. When a new queen is close to maturity, a portion of the colony, together with the old queen, leaves the hive. They sweep through the street, flying in a huge cloud, and then settle in a football-shaped cluster, usually on a tree, in search for a new home.

It can look like something out of, well, the 1978 horror flick The Bees. But while they can appear threatening, swarming bees are believed to be at their most docile state — apparently because they lack a hive to defend. (That said, it’s best to keep a safe distance because they can still sting you.)

For a beekeeper, however, swarms offer a chance to start a new hive. Once a swarm is spotted, the beekeeper gently shakes the bees into a box and takes them to their new home. The bees provide not only honey to the beekeeper, but also make edible gardens and urban farms more abundant.

Capturing swarms can help protect the honeybee population, which has seen a precipitous decline in recent years. According to the National Resources Defense Council, nearly one-third of the nation’s honeybee colonies have been wiped out. Researchers suspect a number of factors, including parasites and pesticides.

Because bees are a pollinator for food crops, there’s concern that if bee populations aren’t maintained, many crops will die off, destabilizing the food supply. According to the National Resources Defense Council, bee population losses are costing $5.7 billion a year globally. All of this has made it all the more important to capture swarms and maintain local hives that are adapted to our area — and thus more able to resist the new diseases and stresses that are causing the bees to die off.

“Capturing a swarm both connects a beekeeper to those particular bees in a very primal way […] and also lets us help protect a very vulnerable and critical part of our ecology and economy,” said Jonathan Zamick, a longtime beekeeper who used to manage the capture of swarms for the Alameda County Beekeepers Association.

Capturing swarms is also a far cheaper option than buying bees. Purchasing a three-pound package of bees costs generally upwards of a hundred dollars, and they usually have to be shipped in from another area. Catching a local swarm is free, and some believe that local bees are better adapted to the environment.

However, there is some controversy around allowing hives to swarm. “It means potential conflict between bees and non-beekeeping humans if it moves into a house, and it means loss of production [of honey] in the original hive,” said Zamick. Beekeepers can prevent swarming if they split their hives — essentially taking one hive and dividing it into two — before the bees have a chance to swarm.

That said, allowing bees to swarm helps maintain bee health. “Because the queen stops laying [eggs] in order to slim down and be able to fly, [swarming] also interrupts the Varroa mite life cycle, which helps [to fight off] this new parasite that is contributing to the loss of so many hives,” said Zamick.

Swarm season lasts from April till June, and during this time, the Alameda County Beekeepers Association gets extremely busy. It runs a free service capturing swarms and performing extractions — removing established hives from unwanted places — and receives as many as a dozen calls per day. Last year, the association captured two hundred swarms and performed fifty extractions.

Beekeepers sometimes describe their captures as an adrenaline-making experience. Alice Rosenthal, an Alameda County Beekeepers Association member and professional beekeeper, recounted one such capture. “They were all laid out on someone’s lawn, like a carpet, and the queen was right on top. So all I had to do was put the queen in a queen cage” — which emits pheromones that help keep the colony together — “and all the other bees followed…. It can be a zen experience.”

To the casual observer, a swarm can prompt a newfound appreciation for the bees.

“People can learn more [about bees] in half an hour than they’ll learn the rest of their lives,” said Andre Kruglikov, Alameda County Beekeepers Association’s current swarm manager.

“Bee swarms, particularly in an urban environment, are a bit of magic,” Zamick said. “We can be so disconnected from nature, and then suddenly here is this mass of thousands of wild organisms traveling in our midst.”