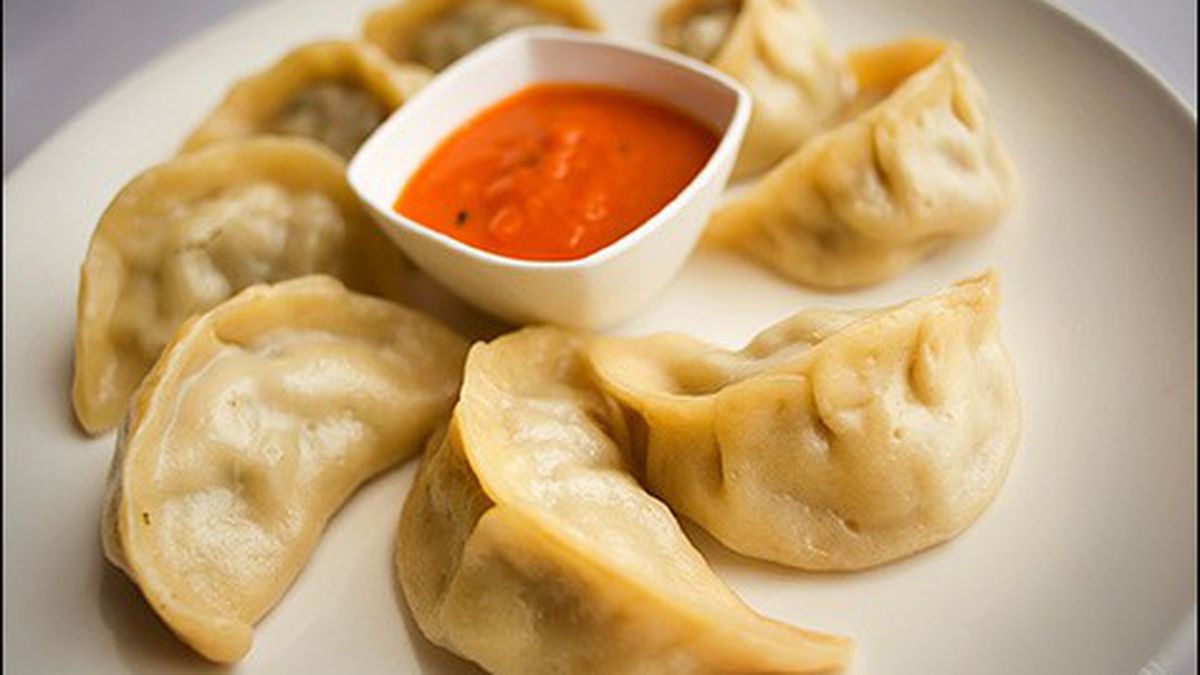 From the first salty and unsettlingly creamy sip of boecha, or Tibetan butter tea, a meal at Tashi Delek can have a slight off-centering effect. The Tibetan-Nepalese-Bhutanese-Indian restaurant, which opened in November in the former Krung Thep spot in El Cerrito, has an eclectic menu that features not just curry-house standards like chicken tikka masala, but also obscure dishes such as salted tea and curry made with shiitake mushrooms and American cheese.

Located on a quiet, sleepy stretch of San Pablo Avenue, Tashi Delek is not, and doesn’t aspire to be, a destination restaurant. But for adventurous eaters and homesick Himalayan ex-pats, the wide-ranging menu offers an intriguing, and often quite delicious, array of home-style Tibetan, Nepali, and Bhutanese dishes.

The name, Tashi Delek, is an all-purpose Tibetan greeting that can be translated as “blessings,” “good luck,” or, simply, “hello.” Although the restaurant’s exterior is somewhat shabby and nondescript, inside it’s full of cozy touches: peaceful woodwind music, Tibetan embroidery on the cover of the menu, and bright orange and red walls, which are lined with little cubbies displaying urns and assorted religious paraphernalia.

The restaurant comes by its diverse menu honestly. One of the owners, Kunkhen Sherpa, is Tibetan; the other, Pasang Lama, is an ethnic Sherpa who grew up in Bhutan and Nepal. And the other main chef, Dorjee Sherpa, is a Nepali who specializes in Indian cooking.

As for that butter tea, I’ll be honest: I was glad I tried it, but couldn’t manage more than a few sips; the saltiness and creaminess were too off-putting. Lama explained that it’s made by blending black tea, salt, milk, and butter (yak butter, traditionally). Tibetans drink boecha day and night, but no one will judge you if you order a chai or a cold beer instead.

Either way, ordering a couple of the Tibetan appetizers is a good way to kick off your meal. My favorite was the sha baley — piping-hot fried buns with a crisp, chewy exterior and a juicy beef filling, served with house-made chili sauce. Also enjoyable were the chay-lay katsa (sautéed beef tongue) and, especially, the pork-belly-and-tomato chilli. Both were quick stir-fries, the meat tossed in a hot wok with onions and chili peppers — classic Tibetan drinking food, Lama told me. One tip: We found these awkward to eat without bread or rice, so ask your server to bring the sautéed dishes out with the entrées, or, even better, get an order of ting mo (layered, pull-apart steamed buns) and make little pork belly sandwiches with them.

The one Himalayan dish that has gotten the most traction in the United States is the momo, Central Asia’s take on a steamed dumpling — a staple in both Nepal and Tibet. And Tashi Delek’s momos (available in beef, lamb, chicken, and vegetarian versions) were some of the best I’ve had. The wrappers — clearly hand-made — were thick and pleasantly chewy, and the beef momos, in particular, had a lovely and distinctive pleating, like a thick braid of hair. The beef filling was simply seasoned (mostly minced onion and soy sauce), but I loved the little squirt of meaty juices I’d get each time I first bit into one.

You can order momos as an appetizer, with chili sauce for dipping, or you can enjoy them in a bowl of mok thuk, or Tibetan-style dumpling soup: a generous portion of momos served in a bowl of mild, but very rich, beef broth that was topped with spinach and chopped cilantro, which added a delicate flavor. This made for a fine lunch on a chilly day, as would the thain thuk, which substituted hand-torn noodles (made from a dough similar to the one used for the momo wrappers) for the dumplings.

The least successful of the Tibetan dishes we ordered was the phing sha, a kind of soupy noodle stir-fry that’s made with cubed potatoes, beef, and mung bean vermicelli, and is traditionally eaten with ting mo. The beef was tough, and the sauce/broth was somewhat bland. I was later told that for Tibetan and Nepalese customers the kitchen typically adds tongue-tingling Sichuan peppercorn (emma or yerma in the Tibetan language) — an addition that would have provided some needed oomph.

While we found it hard to pass up on the harder-to-find Tibetan and Nepalese dishes, the handful of Indian items we tried were excellent — including the garlicky, well-charred cilantro naan and the street snack known as samosa chaat (which one clever local food truck markets as a “deconstructed samosa”). Tashi Delek’s addictive version of the latter featured whole chickpeas and the smashed-up pieces of a fried samosa, both topped with sweet-and-tangy tamarind chutney, diced red onion and tomato, and a drizzle of yogurt. Scooping up a bit of each component, you get the crunch and chew of the fried pastry crust without all of the heavy starchiness of a traditional samosa.

The two strangest-sounding items on the menu were the lone Bhutanese dishes. Both the green bean datsi and the shamu (mushroom) datsi were described as being made from hot chile peppers and “homemade American cheese,” which Lama said tastes similar to blue cheese. Alas, neither dish was available during my visits (probably because Lama was out of the country at the time), and Lama later told me that there hasn’t been enough customer demand to justify continuing to make the cheese from scratch when various American store-bought cheeses work just as well. Still, I’d go back to try one of the datsis; I don’t know of any other Bay Area restaurant that serves this specialty.

To finish, we tried the tsampa dessert, which consisted of roasted barley flour that had been mixed with sugar, yielding a sweet, nutty concoction with the texture of coarse sand. This was topped with yogurt, honey, and dried cranberries, and the overall effect was like an unlikely twist on breakfast granola. So it is that a meal at Tashi Delek might end as it begins, with a dish that’s not quite like anything you’ve ever eaten before — that tastes at once foreign and eminently familiar.