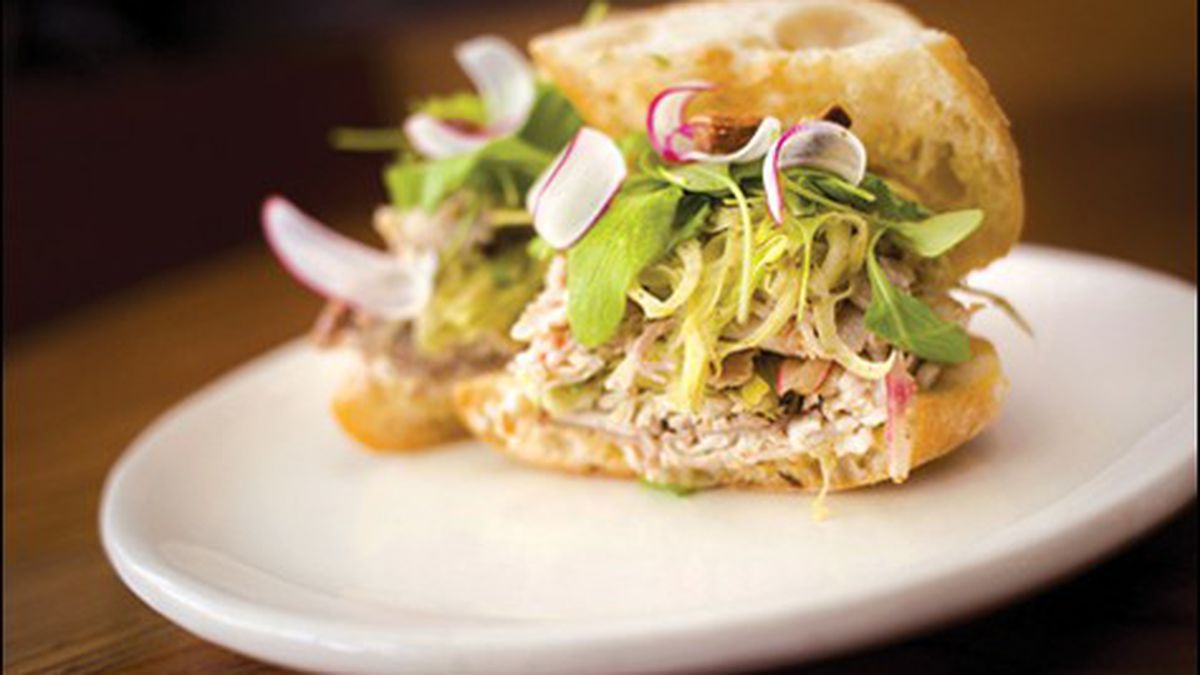 Rosetta Constantino remembers it like this: You’re in a seaside town — say Scalea, in Calabria, not far from where she grew up. It’s July, and you’ve just watched a procession of saints being hoisted through the streets, and you’re in the main square, in line at the porchetta stand, its rotisserie glowing with wood burnt down to charcoal. A head severed from the sacrificed pig is stuck up in front like a grisly beacon, and you wait patiently for your sandwich, your panino, a ruffle of suckling pig shavings cut from whatever part of the animal the knife comes down on when it’s your turn, heaped on bread, with nothing else.

Wait — there is something else. “You always have the skin,” says Constantino, who lives in Oakland and authored the 2010 cookbook My Calabria. “Somehow, no matter how they do it, it’s always perfect.”

Always perfect? Well, anyone who eats out in Oakland or San Francisco is in no position to diss anybody else’s idealization of porchetta. Over the past couple of years the fat-streaked, skin-wrapped pork loin roast seemed to be on menus everywhere. But is it even porchetta? No way, says the man who gave the Bay Area its first taste of real porchetta two decades ago. Not even close.

In 1981, Paul Bertolli was working at restaurants in and around Florence, back when roving pork butchers still drove from farm to farm to perform the autumn slaughter. It was outside Siena that Bertolli met a butcher specializing in porchetta — the diminutive for “pig” — learned how to bone a 100-pound roaster, how to salt it, how to fill it with various chopped and seasoned parts so they’d cohere after cooking and slicing, how to spit-roast the thing.

A decade later Bertolli was chef at Chez Panisse, and for the restaurant’s twentieth anniversary he spit-roasted three porchetti on the closed-off block of North Shattuck. As chef of Oliveto, Bertolli fired up the spit roaster once again for the Rockridge street fair two years running, but never, never in the restaurant.

The problem: No restaurant has the capacity to roast true porchetta indoors. A solution: Use only the boned center cut — the loin, wrapped in the belly, encased in skin, something butchers call “the middle.” But instead of yielding moist meat composed of both lean working muscles and slack fatty ones, what you get is a potentially dry, fast-cooking cut (the loin) surrounded by fatty belly and skin, which take far longer to render. “Done properly, the meat is cooking in its own juices, like a braise,” Bertolli said. “And the skin collagen will break down and crisp.”

And what about the porchetta sandwiches cropping up in Oakland these days? Even accepting the faux-porchetta at their core, are they up to the challenge of super magic? The first challenge: knowing where to find one.

Most Saturdays in Rockridge, that means Market Hall, not far from where Bertolli’s long-ago porchetti turned on their spits. Marin Sun Farms manager Chuck Traugott stands at a table opposite the meat case, assembling about one hundred of them: machine-sliced meat cooked the day before on a gas rotisserie, a smear of olive oil mayonnaise, shaved fennel, and arugula on a Semifreddi’s roll, with what Traugott calls the most important part — the amber cap of skin, pried off the roasts, re-crisped in the oven, and chopped, a shower of glassine bits that crunch like shattered candy cane.

It’s a fine sandwich, thanks to Traugott’s aggressive seasoning of the meat with fennel seed, rosemary, chile flakes, and enough salt to blister your tongue, when it flickers over a pocket of undistributed seasoning in the thin cluster of slices. The downside (apart from lingering dryness, just as Bertolli warned) is that the porchetta‘s served lunchmeat cold, a day after it left the rotisserie.

Chill isn’t a factor at Adesso, where earlier this year owner Jon Smulewitz began offering porchetta as one of two sandwich options in the restaurant’s fledgling lunch service (essentially takeout, though you can sit in the empty dining room if you want to). The meat’s the same configuration of belly-wrapped loin, but it’s piled into a slightly hollowed out Acme roll with arugula and moistened with lemon vinaigrette, the bread crisped, served warm.

Like the salumi made by house charcutier Chad Arnold, there’s a finely tailored quality to the porchetta sandwich here (actually, it evolved on the lunch menu at sister restaurant Dopo), a certain precision in the way lemon and the flicker of chile keep the beautifully marbled clutch of pork from tasting too strong, too grossly animal. But is it animal enough? There may be flecks of rendered skin in the meat, but if so, they’ve turned soft. The crunch of the roll is all the textural contrast you get.

Softness is the hallmark of the porchetta in sandwiches hawked from Plum‘s porky cart, a converted paleta pushcart the restaurant rolls out weekdays onto the sidewalk at the edge of Franklin Square. It’s the brainchild of Ron Boyd, director of operations for the Daniel Patterson restaurant group, a way to make upscale Plum more accessible for a lunch crowd unwilling to spring for the service charge levied on sit-down parties.

Bertolli’s stiffly proscribed Tuscan tradition? Overwritten by the porky cart’s fat, grinning pig sketched in pink chalk on the side panels, under a bulbous pink piggy bank stuck with a mini American flag.

Conceptually, I love the porky cart. Much as I’d like to slip into Bertolli’s ghost world of roving country hog butchers, come on: This is Oakland. Over three visits to Franklin Square, I noticed how the guy hawking sandwiches to the Kaiser workers and high school kids passing by used language that avoided the P-word in favor of something more familiar, less fancy. “Pork loin-pork belly sandwiches!” he called out one day. Another day he dropped the reference to loin entirely.

Still, I don’t quite love the porky cart’s sandwiches. It’s partly the roll (cold, thick Acme ciabatta), partly the meat. Boyd says it’s cooked overnight at about 120 degrees Fahrenheit in Plum’s Combi, a fancy oven that can cook at super-low temperatures. In the morning, Boyd says, the cooks crank the oven to blister the skin. But in three sandwiches I didn’t find meat shaded anything darker than a delicate pearly gray. The pork was moist — something you can’t always say about faux-porchetta — but without detectable caramelization the flavor lumbered off into semi-grotty territory, offal-like intensity without noticeable fennel, pepper, or chile to tether it. Too naked, in other words.

And inconsistent: My first sandwich had me spitting out a gob of belly streaked with unrendered fat. By the third I found myself polishing off the whole thing, even though I wasn’t exactly hungry when I started.

One thing you have to give Plum: It’s got an amazing cache of resources to lavish on even imperfectly rendered things. Sandwich greens come from the Coi roof garden in San Francisco; the delicious flavored lemonades (elderflower-mint one day, rhubarb-ginger on another) are a collaboration by Plum’s Charlie Parker and pastry chef Deanie Hickox; and Hickox’s chocolate chip-oat cookies are amazing.

It turns out that Thomas Odermatt, Swiss-born founder of RoliRoti (headquartered in Hayward) may just be the daddy of what passes for porchetta. Sadly, it’s only available in Oakland once a month, on first Fridays in front of Blue Bottle Coffee‘s Webster Street roasting facility.

After finding success at farmers’ markets with a fleet of rotisserie chicken trucks, Odermatt started doing porchetta just over seven years ago, long before anybody else. These days RoliRoti’s porchetta truck is the marquee food vendor at the Thursday and Saturday markets at Ferry Plaza across the bay, with lines insanely long enough to make the monthly wait for the tranquil scene at Oakland’s Blue Bottle seem seriously worth the patience. It’s like crashing some small, private porchetta party.

Odermatt’s inspiration for the seasoned and rolled middle cut that revolve on the RoliRoti truck’s propane-fired rotisserie? His father’s butcher shop in a little town outside Zurich, Switzerland.

“After the Second World War we had a lot of Italian immigrants coming to Switzerland and Germany to do reconstruction,” Odermatt said. “My father hired a few Italian butchers to help, and they did porchetta at our shop.” Odermatt revived the cut, and started selling porchetta by the pound only. Later came sandwiches done the way he’d remembered from his dad’s shop, with the addition of a balsamic vinegar-spiked onion jam.

“At the beginning some people said, ‘Wow, is that a fatty piece of meat! Nobody will buy it,'” Odermatt recalled. “But the flavor convinced them.” It certainly convinced me: its whiff of fennel, bite of sea salt, and taste of husky caramel in shards of crunchy skin. It’s also warm – the porchetta roasts turn on propane-fired rotisseries right there on the truck, sliced by hand in front of you. And while I didn’t totally dig the onion jam (it obscures the taste of the pork – next time I’ll ask the sandwich maker to leave it off), RoliRoti’s truck veers closest to porchetta‘s traditions.

Who knew: Something recognizably like Rosetta Constantino’s “always perfect” of porchetta nostalgia turns on spits one Friday a month in Oakland.

Inside the Dirty Inn