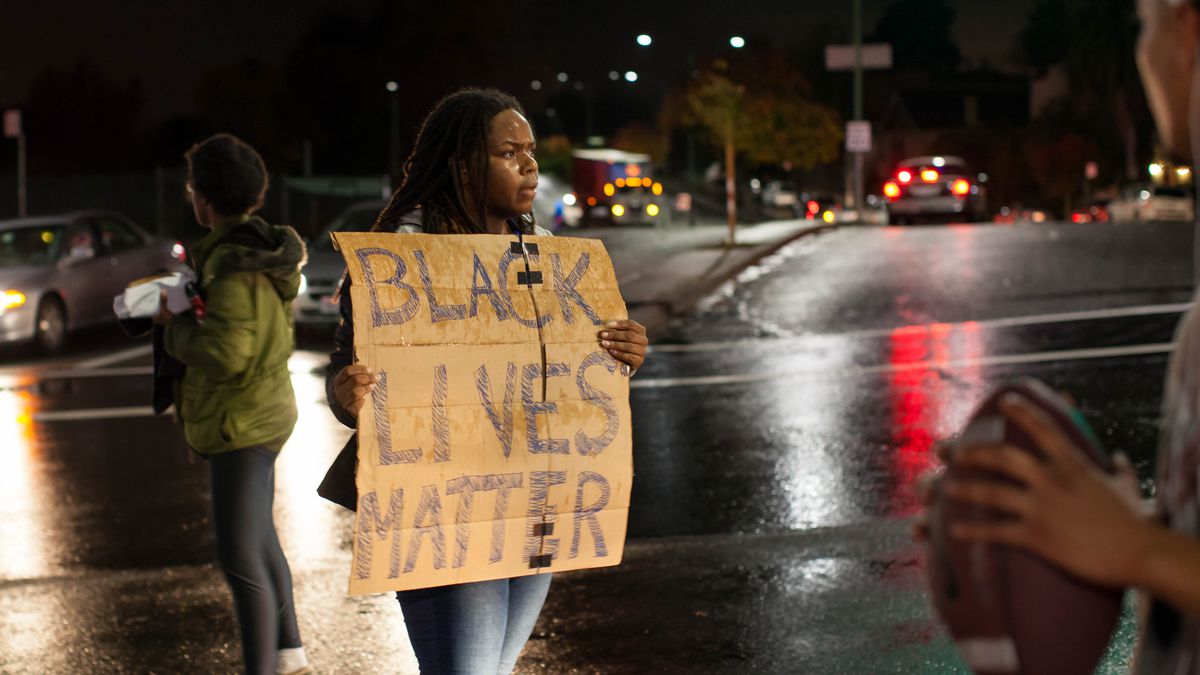 by Sam Levin
Dec 4, 2014
One week after massive rallies erupted in Oakland in protest of a grand jury decision in Ferguson, Missouri, Bay Area activists took to the streets again last night in response to another controversial grand jury ruling in a case involving a fatal police encounter. Yesterday, a grand jury in New York City decided not to indict an NYPD police officer who was caught on camera putting Eric Garner, an unarmed black man, in a chokehold that resulted in his death. The New York Medical Examiner’s office ruled that the July death was a homicide, but a grand jury still declined to indict the white officer, Daniel Pantaleo.

The news came after a Ferguson grand jury last Monday chose not to indict white officer Darren Wilson in the shooting death of Michael Brown, an unarmed, black 18-year-old — a decision that prompted national protests, including large rallies in Oakland.  Last night, the Oakland protests against police brutality and in honor of Garner remained entirely non-violent as activists marched throughout the city in the pouring rain.

[jump] Starting in the early evening, hundreds marched from downtown Oakland up Broadway and through parts of Rockridge before heading back downtown. Despite the persistent rain, activists stayed out until around 9:30 pm frequently shouting “black lives matter!” and “I can’t breathe!” — a reference to the final words Garner repeatedly stated on camera before Pantaleo’s chokehold killed him.

The protests came amid a renewed push across the country for police body cameras — a move that some Oakland activists pointed out would accomplish little if an officer like Pantaleo, who was caught in clear footage engaged in an illegal chokehold maneuver, still managed to avoid all charges through a grand jury process. One Oakland protester carried a sign that summed up a lot of the frustrations voiced in speeches last night: “Body cameras are worthless if a person can be choked to death on video and there is no indictment.”

Despite a heavy presence of Oakland Police Department cops — who at times formed lines blocking activists from marching on certain streets — tensions failed to escalate to violent levels. When activists blocked traffic on 51st Street and Broadway for around twenty minutes, many cars honked in support of the march. From there, activists snaked through quiet, residential streets of Rockridge urging onlookers in their homes to join. The protest came to a close outside Oakland City Hall, where activists took turn speaking out against police brutality — with many expressing frustrations when non-black protesters at times tried to dominate the conversation. In large part due to the weather, the activists agreed to call it quits and return today at 5 p.m. to City Hall to continue protesting.

Here are some more photos from last night’s demonstration, all by Express photographer Bert Johnson: