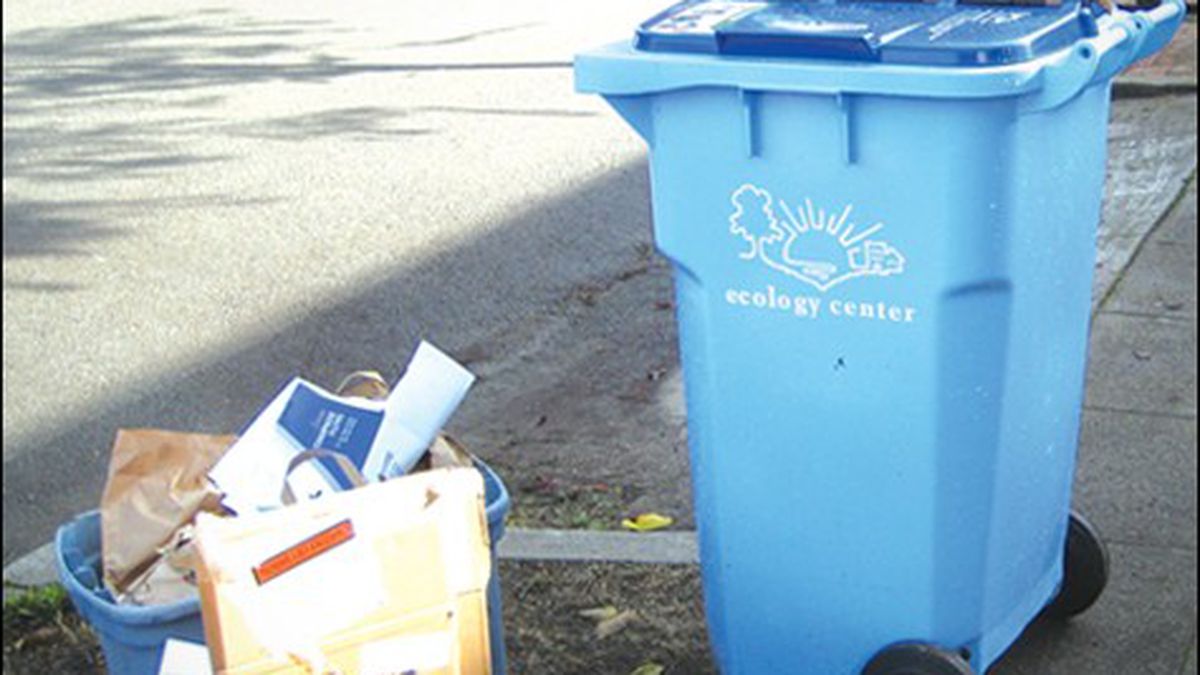 The nation’s first city in curbside recycling has become Alameda County’s last to finally transition to rolling carts. Up until about two weeks ago, Berkeley relied upon the tiny fourteen-gallon plastic bins that its recycling provider, the Ecology Center, had been using since the early Nineties. But the city is now in the process of distributing more than 29,000 brand new 64-gallon carts with lids to single- and multi-family homes, plus another 1,800 96-gallon carts to larger properties. The transition, which is costing the city nearly $2.9 million including interest, should be complete by Thanksgiving. The new carts are expected to address a number of issues, but none as charged as that of poaching, which has become an increasingly sharp thorn in the city’s side.

Earlier this year, Berkeley residents made a stink when, on the heels of a 20 percent garbage rate increase in 2009, the city proposed to shore up its refuse collection budget through a new fee for recycling services. Residents’ complaints were loud enough, in fact, that the city opted for a one-year stop-gap surcharge of $3 per household per month and a trip back to the drawing board. City employees are currently in the midst of reviewing alternative rate structures, said Ecology Center executive director Martin Bourque, and will present residents with a new plan sometime next year. One thing’s for sure: Recycling fees will no longer be folded into standard garbage collection rates, which for many led to the incorrect assumption that services like recycling and composting are free.

Yet the poaching complaint has been a bit harder for the city to handle. Why should residents pay higher rates for recycling service when poachers are intercepting their cans and bottles and redeeming them for cash, leaving the city’s collection services out of the loop? PR-wise, it’s a difficult battle to fight. That’s why most residents, the Ecology Center, and city staff alike hope that the new closed-top bins will hold up to their promise of deterring poachers.

“They’re more an annoyance than anything,” said Stefan Lasiewski, whose North Berkeley home was one of the first to receive a new cart. “I was hoping this would make poaching more difficult for some of these people, and they would go away.” Poachers make the rounds down his street every week, he said. While they’re generally benign, they occasionally make a mess — but then, so do the garbage collectors.

As of last Wednesday, the city had collected three days’ worth of recycling from the new carts, which are divided down the middle between paper and cans and bottles to accommodate Berkeley’s efficient dual-stream sorting process. Initial comments from workers and residents on the poaching front were indeed promising: “Already we’re getting reports that there are fewer people taking cans from the carts, and if they are collecting stuff they’re just rummaging through the top of the cart,” Bourque said.

But it’ll take more than that to convince some Berkeley residents. A generally ringing endorsement of the new carts in a story on Berkeleyside.com prompted a flood of vitriol in the comments section. Residents responded that the carts were not worth the money, or unwieldy, or an ugly shade of blue. But most of the discussion centered on the issue of poaching. Some suggested that simply adding a lid would do nothing to deter poachers. Others felt that the new larger carts would only exacerbate the litter issue by encouraging poachers to dump them out on the street. Bourque responded via a long post of his own that while the larger carts are not expected to eliminate poaching, they have been proven in other communities to reduce it — which will increase the city’s recycling revenues and help offset the cost of collection.

Residents have a right to be skeptical. As the Express reported in June, the city’s laissez-faire attitude toward poaching resulted in a mere 26 citations over two years — while councilman Darryl Moore reported that his office had received as many as fifty e-mails a week regarding the issue. “It’s been overlooked, or a non-priority item in the past,” admitted Berkeley recycling program manager Andy Schneider.

But there are signs the city is beginning to taking poaching more seriously. Last month, city council approved a ramped-up enforcement strategy that targets poachers who use vehicles to collect large amount of material. Police officers have been reminded that poaching is an enforceable offense, said Schneider, and that they can write citations for incidents of poaching in action. “It was a way to begin discussion with the police force, and let them know it’s an important issue, as city council has approved that it’s a priority for them,” Schneider said. To warn would-be poachers, a new bit of legalese has even been added to the tops of all new carts: “Cart and contents are property of the City of Berkeley. Removal of contents is prohibited by law and subject to penalty.”

Poaching aside, most everyone agrees that the new carts — made of 25 percent recycled plastic — should boost Berkeley’s recycling rates. Tom Padia, recycling director at Alameda County waste reduction non-profit StopWaste.org, said the average increase in pounds collected when transitioning from bins to 64-gallon carts is approximately 25 percent — although the improvement may be smaller in Berkeley, where recycling is already so well entrenched. The change also will move Berkeley closer to its goal of diverting 75 percent of its solid waste stream from landfills by 2015. The figure is currently around 68 percent, Bourque said. As for the old bins? They’ll be shipped off to Richmond, melted down, and — you guessed it — recycled.

The Absence of Cyrus Tilton