Mid-Week Menu: Filipino Food in Oakland, Sliders in Berkeley, and ‘Vodka Dumps’ All Over

1) Is Oakland’s Filipino food scene in the midst of a renaissance? Not long after I filed my review of Lucky Three Seven, a new Filipino takeout joint (spoiler: I liked it), East Bay Dish notes another promising Filipino spot, Kain’bigan (2101 14th Ave.), that’s having its soft opening today, starting at 11 a.m. I’m just excited to have another source for Filipino breakfast: The nice-looking menu includes an assortment of “silogs” (various meats served over garlic rice with a fried egg on top). 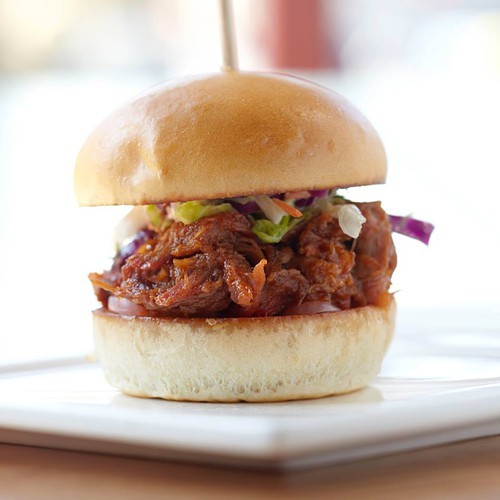 2) Inside Scoop reports that SliderBar, which has locations in Palo Alto and in San Francisco’s Castro district, is coming to downtown Berkeley, to 2124 Center St. The theme, of course, is (rather high-end) “three-bite” sliders: meatball sliders, pulled-pork sliders, chicken ’n waffle brunch sliders, about eight different twists on a regular beef slider, and more. A soft opening is planned for Monday, August 19. During a grand opening celebration on Saturday, August 24, the restaurant will give away 1,000 free sliders. With local favorite Phil’s Sliders (2024 Shattuck Ave.) located just a couple of blocks away, it’ll be interesting to see just how robust the slider market really is in Berkeley.

3) Just a few weeks after I fell in love with the rotis and other Trinidadian specialties at Daniel’s Caribbean Kitchen, the owner announced that the City of Berkeley has forbidden him from operating at his San Pablo Ave. location, pending an investigation of the zoning status of that empty lot. Ugh. In the meantime, Daniel will still be hawking his delicious wares at the Ashby Flea Market on Saturdays and Sundays.

4) After a devastating fire shut the restaurant down early last year, Berkeley’s Great China continues its slow crawl toward opening at its new location at 2190 Bancroft Ave. (the former Looney’s BBQ), right around the corner. Berkeleyside Nosh reports that that reopening has been delayed once again, until at least October — East Bay Peking duck connoisseurs will have to wait a while longer.

5) On Tuesday, August 20, Dishcrawl will host another of its signature restaurant crawls, this time centered on Oakland’s Jack London Square neighborhood. The progressive dinner starts at 7 p.m. and, for $45, includes a sampling of dishes at four different restaurants — you won’t know exactly which ones until the day of the event.

6) Bay Area Bites’ Jenny Oh has been putting together some great top-five food lists focusing on the East Bay. This week it was her five favorite ice cream shops. Previous installments looked at pizzerias, Vietnamese restaurants, and Oakland Chinatown. Check ’em out.

7) The Oakland Tribune reports that several East Bay bars are no longer ordering or serving Russian vodka — and, in some cases, plan to pour out their existing supply — in protest of Russia’s recent anti-gay laws. Oakland’s White Horse, Bench and Bar, and The Alley are among those participating in the boycott. In response to the growing movement, the CEO of SPI Group, the privately owned company that produces Stolichnaya Vodka, has published an open letter stating the company’s support of the LGBT community.

8) Potluck Video caught up with Chez Panisse owner Alice Waters and asked her to share her thoughts on the restaurant’s recent remodel. Check out the video — mainly, it’s just nice to see some shots of the new and improved interior, especially if you’ve had a tough time snagging a reservation since the grand reopening (h/t SFoodie).

9) Finally, ICYMI, earlier this week I did a rundown of great international breakfasts in the East Bay and spoke to the proprietor of a new work-from-home Wi-Fi cafe coming to North Oakland.