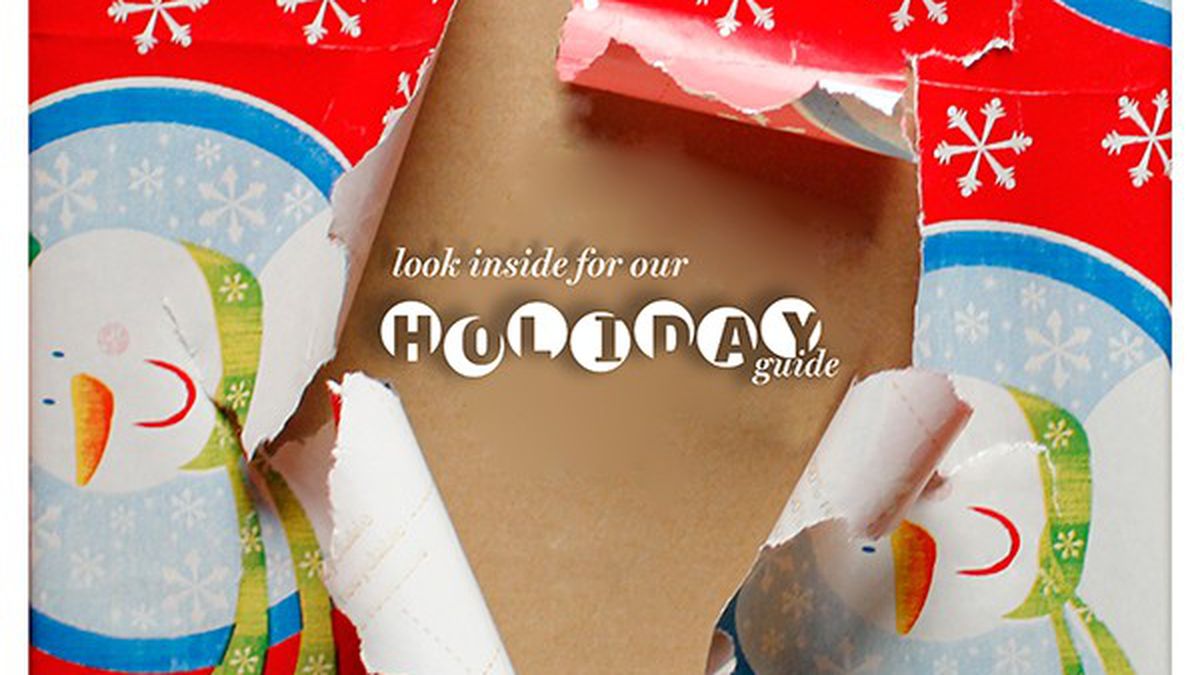 Plaid Friday Is a Win-Win-Win

It’s called tax revenue: It pays for city services to fix things like the huge pothole I hit everyday on my street. It’s a win-win-win.

How about some really oldies and cheapies like Scrabble or card games like Old Maid, which is not politically correct but morphed into spinoffs like Fish, or the very old Japanese favorite, Hana Fuda?

I have always enjoyed reading the Express, and I love that it attempts to publicize what is happening locally. In fact, when the Express and SF Weekly were owned by the same company, I used to work as the house account manager in SF for both classified house accounts! I now am a business owner, and strength and conditioning specialist, and happen to also be a lesbian.
What I found interesting about the Holiday Guide was that the Express seemed to be interested in helping queer women (with the info about the Lexington Club closing and the Express managing editor coming out to the White Horse), but the only fitness clubs mentioned in the guide were personal training studios owned by men: SOL Performance and Urban Fitness.

Oakland has several fitness clubs that are run by queer women. Why have none of these clubs been publicized nor recommended by the Express staff?

I think the health/fitness publications in the Bay Area are seriously lacking, and it would be great to have a newsletter that really provides information and education coming from fitness professionals themselves … and the more local the better!

The massive public reaction to the tragic deaths of three black teens at the hand of white police officers has led to a national call for use of body cameras to record and prevent any future mistreatment of suspects.
There is ample precedent. Animal protection activists have used body cameras to document egregious atrocities and safety violations by workers in the meat, dairy, and egg industries. The resulting videos have led to a number of corrective actions, as well as felony convictions, meat recalls, and even a $500 million civil settlement.

How ironic then that agribusiness interests in seven states (Idaho, Iowa, Kansas, Missouri, Montana, North Dakota, and Utah) have now enacted “ag-gag” laws imposing severe penalties for using body cameras in their agricultural facilities. The language is typically drafted by the anti-consumer American Legislative Exchange Council (ALEC). Let’s hope that other vested interests do not impose similar restrictions on the use of body cameras by law enforcement officers.

This was a fabulously helpful, clear, and in-depth piece about the old and new quandaries faced by musicians in this time. Exploitation raises its head again in sneaky guises.

Lisa B, aka Lisa Bernstein, Oakland

This is undoubtedly the best article I’ve read on this topic. You not only summarized all of the royalty issues involved, including some that had not been entirely clear to me, but you also did a bang-up job of placing the rise of music streaming companies within the wider context of our entire inequitable political economy. I hope this article is read around the world.

It Was Also About the Progressives

It wasn’t just Chevron screwing up, which it did, big time. It wasn’t just Chevron angering people and totally turning them off with the annoying and insulting flood of bogus messages. It was also an unbelievable amount of dedication and months of hard work by a large group of campaign volunteers who supported the Richmond Progressive Alliance (RPA) and Tom Butt — people who are passionate about what happens in Richmond and who worked against all odds to defeat Chevron. Those unpaid volunteers are a huge part of “exactly how an overmatched and underfunded grassroots organization was able to soundly defeat Chevron.” So many aspects of life in Richmond have improved in the last eight years, thanks to Mayor Gayle McLaughlin, Butt, the RPA, our incredible chief of police, and the many competent, caring city employees who are unsung but much appreciated. Now the threat of domination is past and our future is bright once again.

RCV Is the Best

By all measures, ranked choice voting is the most democratic election system. Anyone who opposes it has ulterior political motives that are inconsistent with the best interests of the citizens. I would be happy to discuss its merits in detail, but this article does an excellent job of proving its superiority empirically.

The Old Way Was Better

The complication is not how to check boxes, but how to check boxes so that we don’t have another disaster. Last time the winner was not the city’s top choice — she was our second choice. Even though, this time, my candidate won, I still prefer the old way. Let the candidate with the majority win in the first round, if not have a runoff and allow voters time to adequately review and compare candidates. We had what, fifteen candidates in the race? I didn’t have time to vet each one.

California rejected Proposition 19 for good reason in 2010, and in 2016 they will choose something better. The “Jack Herer Initiative” has launched its campaign as well for 2016. It’s fair and realistic, yet progressive and bold — like California itself. CCHI2016 and nothing less!

Give Smokers a Break

While it’s good to enlighten us on the environmental hazards of discarded cigarette butts, it’s also good to keep things in perspective. Couple things here: First of all, while it’s clearly bad to have plastic/toxic butts floating out into the bay, it should be kept in mind that they are just one part of all the plastic and other crap that finds its way into our coastal waters, and while I don’t know for sure what proportion of this crap is cigarette butts, I’m willing to bet that it’s a small part.

Anecdotal evidence: My former residence in Oakland was near a large storm drain that would run about half a foot deep in water, back in the days when rain actually fell. I would go out and clear out the drain several times a season when it got clogged with all kinds of trash, primarily plastic bags, candy wrappers, and other non-biodegradable crap. I’ve also spent enough time along various places on the shore, where such crap accumulates, to see its constituent parts, including marine debris like plastic foam from buoys and other flotation devices, plastic rope, plastic containers, etc. And of course I knew then that at least some of this stuff, once it finds its way to the drain into the bay, ends up in the Great Garbage Patch in the Pacific, yet another of mankind’s despicable crimes against nature. So let’s not pin all the blame on butts.

Or let’s take another tack: Instead of just condemning smokers for being so careless for discarding their butts willy-nilly, how about providing places for people to dispose of them, especially at places where we know people tend to smoke, like bus stops? (I remember, back in the bad old days, there used to be a lot more receptacles for smokers than there are now.)

Which brings me to my second point: Despite the filthiness of their habit and the litter they sometimes leave behind, smokers are people, too, and except where smoking is prohibited (increasingly by nanny-state legislation, however well-intentioned), they are still allowed to practice their abominable and unhealthy habit, so perhaps we can back off the moral high-handedness a little. Besides, shouldn’t we be treating this as a medical problem, rather than a moral one, like drug and alcohol addiction? After all, it was Reagan’s surgeon general, C. Everett Koop, who told us that nicotine is far more addictive than heroin and cocaine (as well as more poisonous than either strychnine or arsenic). So give smokers a break, okay? And provide more places for them to dispose of their butts in the places where we know they’re going to smoke. (Disclosure: I’m not a smoker. Tried it in high school but never inhaled.)

Meanwhile, those who care about such things ought to be vigilant about preventing any man-made stuff getting into the bay/ocean. Perhaps we should ban most of the offending stuff outright? If only …

The Express is a little flaky in its use of the liberal and progressive terms. In Oakland, Libby Schaaf was a founding member of Make Oakland Better Now!, an advocacy group dedicated to increasing the number of police and cutting everything else in city government. MOBN also advocated for a rainy day fund/reserve instead of worker pay increases. She was an austerity politician until she ran for mayor and realized she needed left-wing votes to win. Hopefully, the Express is not an unwitting pawn in a plan to defraud Oakland voters (it remains to be seen who the real Schaaf is). Unfortunately, your endorsement of her obscured decidedly unprogressive votes such as trying to prevent protests at the Port of Oakland.

Correction: The original version of these letters contained a false assertion by a letter writer that Game Changer Fitness is run by a lesbian.

California State Parks Back on the Chopping Block