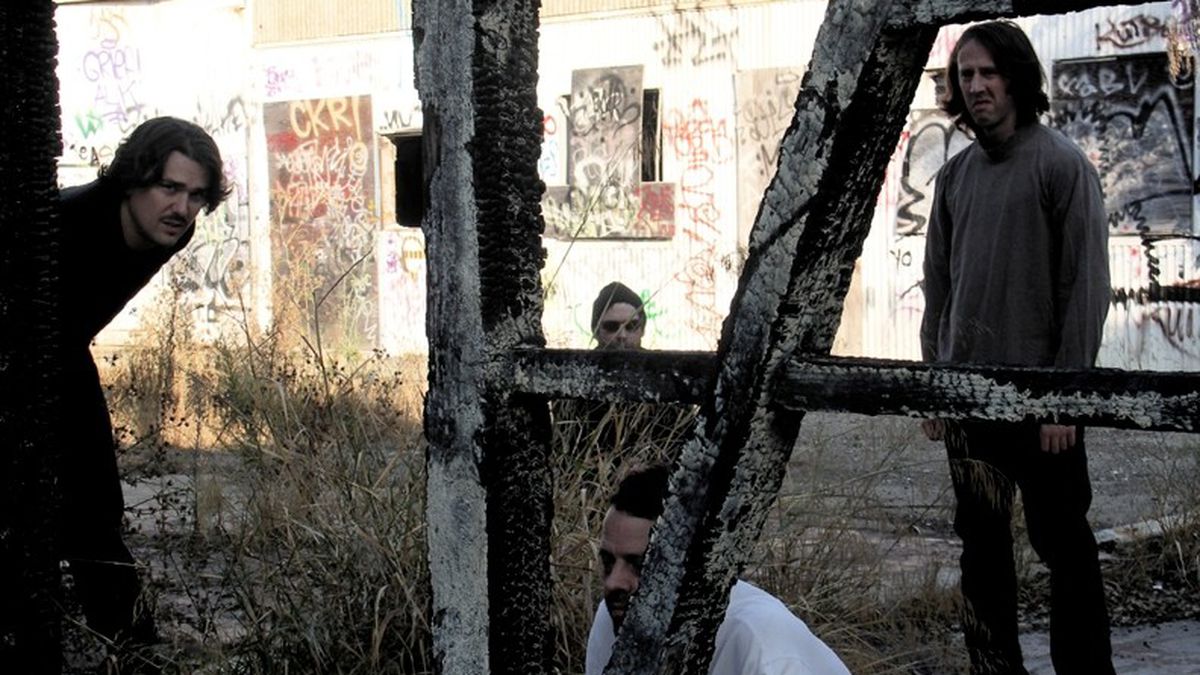 The Oakland's quartet doesn't fit into any metal scene — and that's saying a lot.

Even by metal’s standards, Dimesland is kind of a weird band. That’s worth repeating. The Bay Area is home to all manner of obscure black-metal bedroom outfits and grimy crust bands, and yet this Oakland quartet might be considered a bit on the fringe. It’s partially the music, evidenced on its debut EP, Creepmoon, which retains the aggressive and loud foundation of metal but also takes every opportunity to keep things unexpected, with starts and stops, movements and jumps, unusual rhythms, varied sonic textures, otherworldly effects, and all sorts of riffs skewing, colliding, and nose-diving into waves of dissonant noise and then surfacing back for air.

But it’s also the fact that nothing about Dimesland adheres to genre norms, from the name of the band to its album artwork to its founding members. Brothers and guitarists Nolan and Drew Cook (the former taller, older, eloquent; the other quieter and slighter of build) don’t look or talk like your typical metalheads. They grew up all over the country but spent a decent chunk of time in Virginia, as revealed by Nolan’s laid-back drawl. Since 1998, Nolan has worked as a touring and recording guitarist for the experimental collective The Residents, which in itself tells you a lot about where Dimesland is coming from. One gets the sense that, all their lives, the Cook brothers have been outsiders. And even living in the mostly open-minded Bay Area for the past eighteen years, their status hasn’t changed much. Nor would they like it to. “We like departing from the expected parts of metal,” Nolan said.

But that’s not to paint them as outcasts. Perhaps their attraction to the offbeat was somehow a residual effect of dealing with constant displacement growing up, something that bonded them, but also provided a form of escape. The brothers (there’s a third who lives in Los Angeles) started in Texas, then hopped around the Midwest and up and down the East Coast, and finally settled in northern Virginia. Music was a constant: “It started out with Sabbath, Zeppelin,” Nolan recalled. “That was a huge influence and the first influence, but then we started finding nuttier stuff — [Captain] Beefheart and Snakefinger and what have you — so there was a double path, always. We were interested in metal and hard rock, but also in stranger stuff.”

Weekends were spent at the local record store, where vinyl was cheap and plentiful. They’d bring home stacks of records — including ones they didn’t know anything about — for less than twenty bucks, which exposed them to all kinds of music. The local free-form radio station was another prized source of new sounds.

As teenagers, Nolan and Drew both picked up the guitar. They played in separate bands but also together on the side. After graduating from high school and moving to Richmond, Virginia, they co-wrote an album, playing all the instruments themselves, under the moniker Land of Thin Dimes. They described it as “experimental,” “really obtuse, angular,” and “almost a little cartoony.” Even though it was never officially released, it caught the ears of Guitar Player magazine and Neva Chonin, who picked it as her demo tape of the week for the San Francisco Bay Guardian.

That was fitting, because the Bay Area had long held appeal to the Cook brothers. Drew said he had “always been enamored” with the area. Nolan explained the decision to move more bluntly: “to escape the horrible town we were living in.” So in 1994 they packed all their belongings — including a dog and a rabbit — into a truck and never looked back.

Once in town, the brothers put together a live band, “doing a louder version of the weirder stuff we wrote in Richmond,” Nolan said. Members came and went, a record was released and went nowhere, and then things fizzled out. Then Drew moved to Los Angeles and Nolan started playing with The Residents.

The Residents gig was the result of a bit of serendipity. Nolan happened to give his friend, who worked at The Residents’ boutique record label, an “oddball” cassette that he and Drew made. When the friend heard that the collective was looking for a guitarist to play a Halloween show at the Fillmore, she gave them their cassette. Apparently it was a successful show, because he’s been playing with them ever since. “Yeah, I did not see that coming,” said Nolan, who described himself as a “huge fan” of theirs. “It’s been a wonderful experience.”

Touring with The Residents involves a fairly intense time commitment — Nolan said they go out every couple years and the most recent tour lasted a year and a half. But during one lull several years ago, Nolan and Drew (who had since moved back) decided to reform their band. “We decided, let’s go back to our first love, which was metal stuff, but then incorporate our other influences into it so it didn’t come out as a trademark metal sound. More like just using the tools, the volume, and the aggression of metal but kind of infusing other kinds of musical ideas in there. We figured, why write something that you could hear a multitude of other groups play?”

It took a while for the project to solidify. The initial lineup didn’t pan out, and finding new members took a while. In the meantime, they recorded the Creepmoon EP (at Lucky Cat Recording in San Francisco with Kurt Schlegel) with a temporary bassist, who provided the vocals, and a drummer. Eventually, through friends, they found drummer Harland Burkhart and bassist Greg Brace, who’s now Dimesland’s primary vocalist. In addition to being the two guitarists in the band, the Cook brothers are also the main songwriters and lyricists, but they say it’s a collaborative process.

“This kinda is the lineup we’ve been waiting for,” said Nolan. “They’re great guys, super talented, and we all get along.” (Actually, they get along so well that three-fourths of Dimesland, sans Nolan, have been playing in the melodic black-metal band Wild Hunt, which releases its debut album May 1 on Kemado Records.)

As is all too common in the recording process, a decent chunk of time has accumulated between the writing of the material and the actual release date, so at this point Dimesland has established not only a new lineup but also an evolving sound. It’s safe to say the band is poised to move forward again. Nolan says they’re almost finished writing a new record, which, like Creepmoon, will be released by Vendlus Records hopefully later this year.

“Some of it is quite different,” Nolan said about the new material. “More dissonance, more experimental. We’re always trying new stuff. We’re really excited about it.”

Granted, experimentalism in metal has become very popular lately. Across the board, a lot of bands are trying new things, from underground black-metal noise bands like Portal to mainstream prog-metal groups like Mastodon. In Dimesland’s case, it appears to be the result of a lifetime of listening to a wide variety of music, as well as absorbing influences from film and art. The Cook brothers cited the works of Polish composer Kshishtof Penderetsky, and filmmakers Akira Kurosawa (Seven Samurai, Yojimbo) and Marc Caro (City of Lost Children, Delicatessen), as inspiration.

Like the works of those artists, Dimesland’s music can be transcendent: “Trophy Wives Under the Influence” sounds like a ride on a intergalactic thrash-metal rollercoaster; dissonance and unusual timing make “Revlev” an ever-expanding sonic kaleidoscope. Clocking in at less than eighteen minutes, Creepmoon is brief but to-the-point: This is the expression of musicians who appear to have no creative limitations.

“The good thing about this is that there’s never guidelines,” said Drew. “The palette is huge that we made for ourselves. And it just allows us to keep going forward, trying things we haven’t tried yet.”

Kaplan Officially Announced Candidacy for Oakland Mayor — And Asks for...

The Gift of Gab