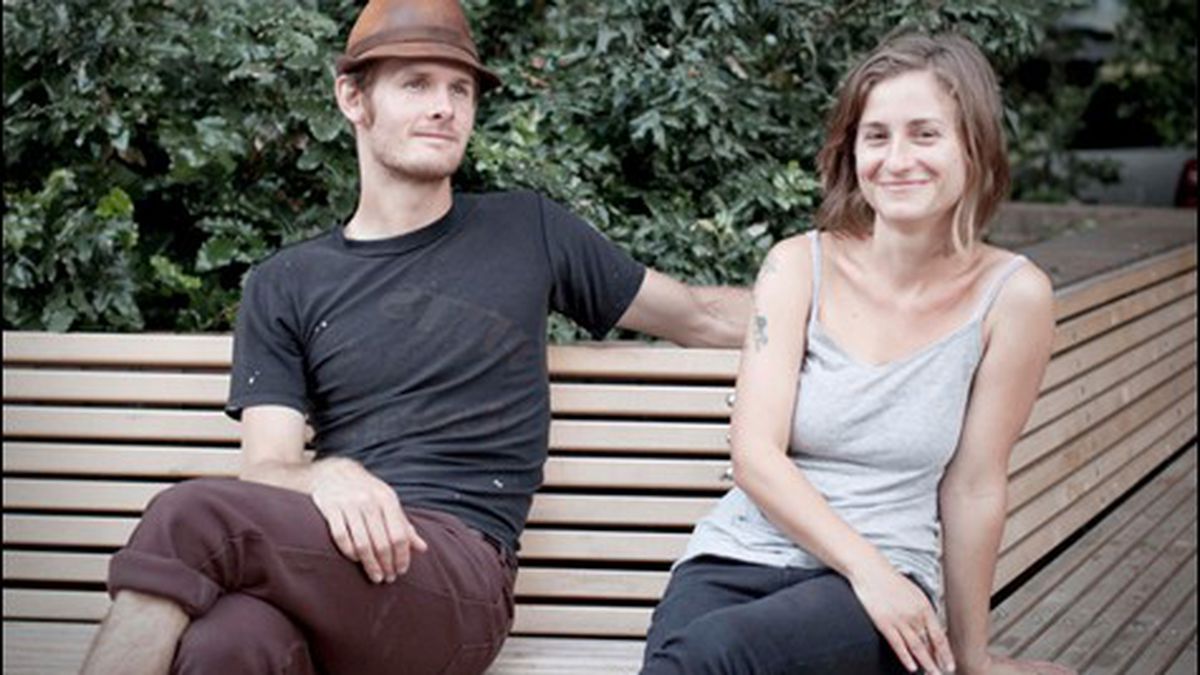 Six years of performing has been just enough to earn Oakland duo Silian Rail a modicum of local renown, even if guitarist Robin Landy and drummer Eric Kuhn are still playing the kinds of shows that request a bottle of wine as the price of admission. (So said one of the flyers on the band’s studio wall, for an event at a small art gallery.) It has also left them with a three-LP discography and a sprawling oeuvre — “sprawling” in the sense that it’s voluminous, and that each individual song seems to unspool in every direction.

Such ponderousness means the band has more in common with noisy, improvised art rock than with its peers in the indie scene. It also shows that as a general rule, Landy and Kuhn privilege inventiveness over accessibility. Roughly 90 percent of their music is purely instrumental — the only exceptions are a few guest vocals on the forthcoming EP every/one, and a spoken-word poem called “I Remember Bernadette,” which appeared on the band’s 2011 acoustic EP. (It was penned by their friend Andrew Macy, who plays bass for B. Hamilton.) For the most part, Silian Rail eschews vocal parts for fear of “telling listeners what to feel,” as Landy put it. She said that while the absence of a human voice might seem conspicuous to everyone else, she and Kuhn almost never think about it.

That’s not the only thing that separates Silian Rail from traditional rock acts; in fact, the band seems to have no pop pretensions whatsoever. Its songs don’t have hooks, the rhythms shift constantly, and the chords often sound smudged. Kuhn describes each tune as a patched-together sequence of “loopy, long-phrased parts,” and admits that he and Landy sometimes have a different idea of where it begins and ends.

With all that said, there’s a refreshing quality to Silian Rail. This month it releases its latest project, a full-length album called each/other in concert with the every/one, and both works stand out in a scene known for taking liberties. Landy and Kuhn are messy refuseniks, after all, and their music betrays the intricacy of their compositional process. It’s not cleaned up or plotted out; there’s no transcription on staff paper or scribbling in notepads, and it’s hard to say whether the musicians even think about “form” until they have to memorize a set list. In Oakland, though, they’re winning respect from a fairly broad audience. Silian Rail might, in fact, be exemplary of the kind of crossover band that can thrive in this environment, where “crossover” means something that’s rather outré but retains a pretty patina.

Raised in the same town in North Carolina, the two musicians attended middle school together. Kuhn played in power-chord-oriented garage bands that devoted most of their energy to covering Bikini Kill; Landy sat in on his practices and swooned. They parted ways at age thirteen and reunited about six years ago, when Landy ran into a mutual childhood friend while searching for apartments in the East Bay. It turned out Kuhn had moved here, too. The two hit it off again, realized they both played music, and started jamming. They formed Silian Rail shortly thereafter, and named their band for the font used on Patrick Bateman’s business card in the movie American Psycho. It’s a slightly obscure reference and a name that nobody ever remembers, which suits the band perfectly.

Originally, Landy and Kuhn composed separately, then sutured the parts together. Their styles differed noticeably: She’s self-taught and relies on intuition, plays open-string guitar, and often voices chords in unorthodox ways. He took piano lessons as a kid and studied music for two semesters at UC Santa Cruz. He describes songs in technical terms, citing the point where a 6/4 meter becomes 6/8, or the chords shift from major to minor. She tends to think in phrases rather than themes or time signatures, which perplexed him at first. Then he got used to it. Then he embraced it, and unevenness became part of the band’s signature. “There’s a lot of push and pull,” Kuhn said, explaining why the song structures are often hard to follow.

Over time, the two developed a writing process that was much more improvisational and collaborative. If anything, it’s been salutary for their music. Landy continues to write murky, intertwined melodies on her Rickenbacker guitar, using reverb to make them sound denser and foggier. Kuhn gathered ambient sounds and turned them into samples: crickets chirping, feet thwacking through tall grass, an elevator humming, a woman yelling in a stairwell (cribbed from a documentary on schizophrenia). Ironically, as their approach got more haphazard, the music seemed more focused. Each/other features a series of rock ballads that, if not exactly clean, at least have a singing quality. Several tracks are bolstered by viola from Dina Maccabee, who adds an ornate vibrato polish to the duo’s lean setup.

Such attributes, combined with a patchwork structure, might explain the band’s surprisingly wide appeal. In the last couple years, Silian Rail has appeared on warehouse bills with avant-garde jazz bassist Trevor Dunn; in garage venues, bookstores, and art galleries; and also in mainstream rock venues — the band’s CD-release party happens at Bottom of the Hill. Landy and Kuhn seem to have carved out a niche, albeit an amorphous one. They’d still argue that beautiful music doesn’t require the kind of hooks you can sink your teeth into. And they still seem not to care whether listeners remember the name “Silian Rail.”

Previous ArticleBreaking: Bay Guardian Sale to SF Examiner to be Finalized in May