The oil giant is pumping millions into the campaigns of four favored candidates in an effort to unseat the city council's progressive majority. 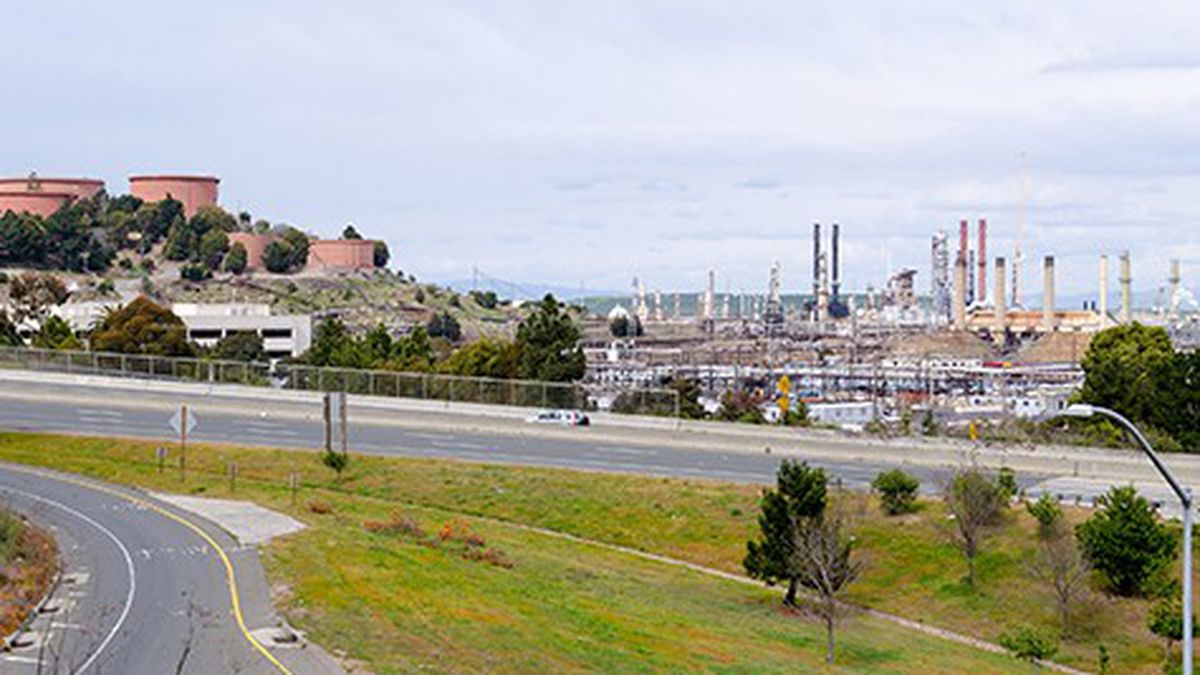 Five of Richmond’s seven council seats are up for grabs in this year’s election, which means there could be a seismic shift in the city’s power structure. This is a fact not overlooked by Chevron, which is spending millions in a bid to defeat its underfunded, progressive opponents and retake control of the working-class city’s local government.

Not including those running for mayor, twelve candidates are vying for four council seats (the mayor also sits on the council in Richmond). The top candidates for the three four-year seats on the council are incumbent Mayor Gayle McLaughlin, a progressive who has been termed out as mayor; progressive Councilmember Jovanka Beckles; longtime Councilmember Jim Rogers, who is considered a moderate; and school board President Charles Ramsey, a veteran politician backed by Chevron. Battling for a two-year seat on the council are incumbent councilmembers Jael Myrick and Corky Boozé.

The campaign is being heavily influenced by Chevron, which has so far pumped $3 million into political action committees that are trying to elect the oil giant’s favored candidates. As of September 30, Chevron had spent $1.4 million to promote its four favored candidates: Nat Bates for mayor and Ramsey, Donna Powers, and Al Martinez for city council. The oil company also has spent $500,000 to attack three council candidates — McLaughlin, Beckles, and Eduardo Martinez — representing the Richmond Progressive Alliance (RPA), a grassroots organization that refuses all corporate contributions.

Chevron’s political committee, Moving Forward, has inundated voters with glossy hit-piece mailers, robocalls, and ads on websites, radio, television, and billboards. At the end of September, Moving Forward still had more $1 million in its coffers for the last month of the campaign.

The RPA candidates — McLaughlin, Beckles and Eduardo Martinez — had raised $95,500 combined as of September 30, according to campaign filings.

Chevron has been attempting to regain control of the council for the past eight years and the availability of five council seats has offered the corporate giant its best chance to do so yet. For decades Chevron treated Richmond like a company town. Refinery executives groomed and financed the majority of councilmembers, giving the corporation a powerful say in the hiring of key administrative positions, such as city manager, finance director, and chief of police. As late as the 1990s, Chevron’s influence over the city was so great that one of its executives had a desk in the city manager’s office.

The result was that the refinery, which is one of the largest polluters in the Bay Area, enjoyed special tax breaks, lax environmental standards, and slipshod permit requirements.

But Chevron lost its grip on Richmond in 2003 after the city suffered a financial meltdown. Contra Costa County took over management of the city and brought in Bill Lindsay, the then-city manager of Orinda, to run Richmond. For the first time, Richmond had a city manager and department heads who had not been vetted by Chevron. The newly formed Richmond Progressive Alliance was successful in getting candidates elected to the council, and Chevron eventually lost many of its special privileges. The city’s new political leadership also has not been shy about taking the oil giant to court. The council forced Chevron to reduce the scale of a modernization project that will bring more dirty crude into the refinery. And the next council will likely negotiate a large settlement with Chevron over a 2012 explosion and fire that sent 15,000 people to the hospital with respiratory problems.

Under Lindsay’s management, Richmond has thrived. The city’s once-notorious crime rate has dropped to its lowest in 33 years, and the city’s community policing program has become a national model. New businesses are coming into town and Lawrence Berkeley National Laboratory is building a 2-million-square-foot lab on the city’s southern waterfront.

Chevron’s three council candidates in this year’s election also appear to be an awkward fit with the good government policies that have taken hold in Richmond since Lindsay’s arrival. Ramsey, a 21-year veteran of the West Contra Costa United School Board, is a polished politician and who has been a passionate advocate for the 28,000-student school district. But he’s also being investigated by the US Securities and Exchange Commission concerning $77.5 million in bonds issued for school construction projects. While there is as yet no evidence of wrongdoing, the school board has approved $150,000 for Ramsey’s legal representation. It is standard for school boards to provide such funds, but Ramsey has used the district’s money to hire his brother, Ismail Ramsey, to represent him at $495 an hour.

Ramsey has made Richmond’s projected budget deficit a focus of his campaign, and has suggested several possible fixes for the city’s financial issues, such as addressing the city’s inexplicably low property assessments, which are resulting in low property tax revenues. “The next council will be facing an $8 million deficit and that’s what this election is about,” Ramsey said at a candidate forum earlier this month. “We need to address the county assessor about reevaluating property assessments in Richmond and getting them to where they should be and we need to make sure there’s enough support for businesses that will come to town in support of the new Lawrence Berkeley lab.”

Powers also has experience as an elected official, having served on the Richmond City Council from 1991 to 2000. She was something of a novelty during her first council term because she was working at the time as the topless mermaid at Bimbo’s 365 Club in San Francisco. She had worked at the club for 25 years and continued to work there two years after she was elected. She received national media attention for her day job, but it apparently did not hurt her reputation because she was easily re-elected.

After she left the council, she moved to Martinez with her husband, Chevron consultant Tom Powers, whom she recently divorced. For the past fifteen years, Powers has not been involved in Richmond politics at all. Since the campaign began, she has been somewhat aloof and has only attended a few of the twenty candidate forums. On the rare occasions when she does show up, she tends to say things that make Richmond residents bristle. At the League of Women Voters candidates’ night in September, Powers said that Richmond’s reputation for crime is terrible and that “many of my friends refuse to come here.”

Powers is campaigning largely on her two terms on the city council in the 1990s. She claims responsibility for helping create the Rosie the Riveter National Park and helping establish a regional disaster warning system in case of industrial fires, explosions, or chemical spills. She also promotes herself as an unstoppable problem solver. “I am like water,” she said in an interview. “I will find a way around any obstacle standing in the way of efforts for this city. I will go up and over, around, or under anything to get things done.”

Chevron’s third council candidate, Al Martinez, is a retired US postmaster. During the campaign, he has frequently pointed to his years as a Richmond police officer in the early 1980s. He has taken credit for developing community policing in Richmond and for the huge drop in crime over the past eight years. However, he neglects to mention, or even discuss when asked, why he left the police department. In 1983, then-Officer Martinez was charged with kicking in two locked doors in a secured section of the police department’s third floor detective division and stealing a sawed-off rifle, a handgun belonging to another police officer, and more than $400 worth of cocaine that had been marked as evidence, according to court documents. Martinez was arrested for the theft and was discovered to be in possession of cocaine and methamphetamine.

After a 23-day trial in 1984, he was acquitted on all nine counts because of the way the drugs had mishandled by police during arrest. Despite being found not guilty, his career with the Richmond Police Department was over.

Martinez has since served on the Richmond Police Commission and has volunteered as a police chaplain. Nonetheless, he has avoided answering questions about his drug use, arrest, indictment, and trial. At a forum earlier this month, I asked him to talk about the reasons he was kicked off the force, but he sidestepped the question. “I wasn’t asked to leave; I saw a chance to get into management in the postal service and I took it,” he said.

Martinez’s campaign platform is less specific than other candidates. Mostly, he describes himself as a leader who will be able to take charge of the council. “I can get things done through leadership,” he said at a forum. “I will fix the process, and whatever the issue is, I will bring it forward. I can be your champion, but it will always be what you want.”

The Richmond Progressive Alliance is campaigning on three primary issues: improving education opportunities for students, bringing new businesses to Richmond; and saving Doctors Medical Center, which is in danger of closing down. The RPA candidates are also campaigning on their success at holding Chevron accountable. “After decades of Chevron domination, ordinary people in Richmond have organized and stood up to the oil giant,” McLaughlin said. “We have won important victories — against all odds. We’ve come too far over the past decade to turn back now.”

Finally, in the battle for the two-year seat between incumbents Myrick and Boozé, Myrick is championing the 10-year, $35 million Richmond Promise program, which guarantees college tuition for every Richmond high school student who graduates. The program was funded with money from a Chevron community grant to help offset the refinery’s impact on Richmond residents. “I am very proud of my role in creating Richmond Promise and we need to continue to focus on educating our young people,” said Myrick, who, at age 29, is the council’s youngest member. Myrick was appointed to the council by the council majority in 2012.

Boozé, by contrast, is a longtime gadfly and perennial council candidate who finally won a seat on the council in 2010. His campaign was endorsed that year by Mayor McLaughlin and Councilmember Tom Butt. But as soon as Boozé was sworn in, he turned on McLaughlin and Butt and began to publicly attack them, as he aligned himself with Chevron.

Boozé’s tenure on the council has been marked by his disruptive behavior, including filibusters complete with race-baiting rhetoric, personal attacks on his fellow councilmembers, tedious non sequiturs, and self-aggrandizing digressions during which he refers to himself in the third person. In addition, he is closely associated with a group of residents who have regularly disrupted council meetings and hurled homophobic slurs at Beckles, Richmond’s first openly gay elected official. Booze has denied he’s homophobic and claimed the controversy is Beckles’ fault. “She’s got a short fuse,” Boozé said of Beckles in an interview with the San Francisco Chronicle. “Some people don’t care for her lifestyle. I don’t care for it myself, but she takes that in a homophobic way. I’m not homophobic. My ex-wife is a lesbian.”

Boozé’s behavior has been so distasteful that Chevron apparently decided that he was too much of a liability and chose not to back him this year.