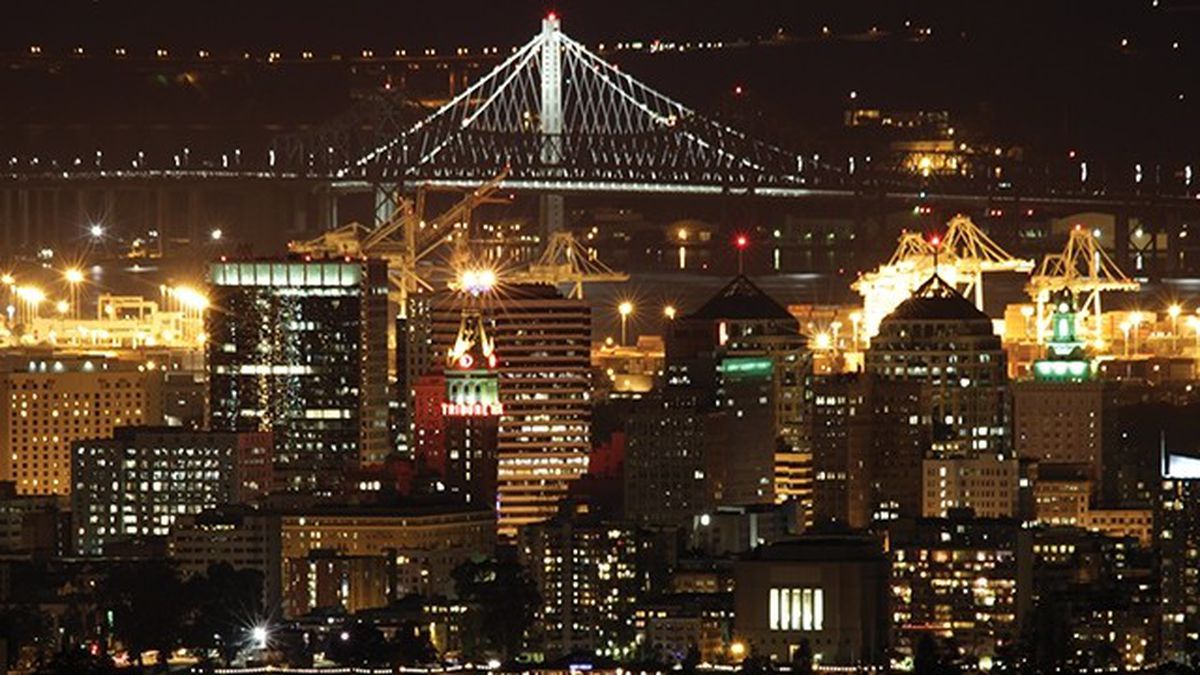 Another Reason to Turn Off the Lights

A recent study suggests that artificial lighting makes it harder for birds — and perhaps humans — to fight off West Nile Virus.

Two of the birds that died from West Nile Virus infection were house sparrows. One was found in a Castro Valley neighborhood in late May and the other in a busy Hayward neighborhood in early October. It’s not clear how long the sparrows were infected with West Nile before they died. But according to abatement district lab director Eric Haas-Stapleton, house sparrows are especially susceptible to contracting the disease and spreading it.

“In house sparrows, the virus can generate a chronic infection, which can be transmitted to mosquitoes that bite birds,” Haas-Stapleton explained. “Those sparrows can live for a very long time with West Nile Virus,” thereby increasing the risk that the infected birds will be bitten by mosquitoes, which, in turn, will then spread the disease further.

House sparrows are among the few avian species left in urban areas due to habitat loss from urbanization. Because they are also considered a reservoir species that naturally breeds infectious pathogens for West Nile Virus, they were the go-to species for a study earlier this year that is raising new concerns about the impacts of urbanization — specifically, light pollution — on the spread of disease.

The study, first published February in bioRXiv, a repository for biological sciences papers, and followed up July in Oxford’s Integrative & Comparative Biology journal, was led by University of South Florida global health Ph.D. student Meredith Kernbach. The findings suggest that light pollution from artificial lighting can lengthen the infectiousness period of West Nile Virus in birds, and thus could allow the disease to spread more easily. The study revealed that light pollution could ultimately increase West Nile Virus outbreaks in urban areas by 41 percent.

West Nile Virus landed in North America nearly two decades ago, from where it was first identified in the West Nile District of Uganda. While most people do not display symptoms when infected with West Nile Virus, statistics from the Center for Disease Control show that 1 in 150 people develop serious illnesses — including high fever, convulsions, muscle weakness, vision loss, paralysis, and coma — that affect the central nervous system. Within this group, 1 in 10 people die from the illnesses. There is no cure or specific treatment for West Nile Virus infections.

The disease has killed millions of birds, decimating populations, including those already endangered and threatened. Horses have also been known diagnosed with West Nile Virus and once infected, the virus can damage the spinal cord and brain.

The lack of previous research on light pollution and its potential link to the spread of West Nile Virus motivated Kernbach to pursue the subject. “There’s been a lot of work done that’s found that light pollution has a lot of negative consequences on individual fitness and health,” Kernbach said in an interview. “It causes them to change behaviors, but nobody has really looked at infectious disease dynamics.”

Just how does light pollution play a role in infectious diseases in birds — and perhaps in humans?

It has to do with artificial lighting — specifically, blue light. A shorter wavelength light, blue light is commonly used in both fluorescent lighting and energy-efficient LEDs in many urban areas. Blue light also emits from other artificial sources that accompany our lives: computer display and TV screens, tablets, and perhaps most importantly, our smartphones.

Blue light has its benefits; it can help our bodies produce vitamin D, boosts alertness and mood, and supports memory and cognition. But blue light also contributes significantly to light pollution — the glow or glare of dim light at night from artificial lighting, emitted by lighted buildings, streetlights, vehicle headlights, and lit billboards.

Kernbach’s study subjected house sparrows to two environments: one that mimicked dim light at night (dLAN), a common form of light pollution, and the other that mimicked the natural light at night emitted by the moon and stars. Both groups of sparrows were exposed to the same environment for up to three weeks, both before and after they were injected with West Nile.

Using a strain known as West Nile-NY99 to inject the experimental group, the researchers subjected the house sparrows to 12 hours of natural light followed by 12 hours of dim light to mimic the light pollution that is now widespread in urban places.

On the sixth day following infection, Kernbach’s team found that the sparrows exposed to dLAN had higher levels of West Nile Virus in their bodies than the control group for longer periods. Though it largely depends on the species, infected birds will typically carry West Nile Virus for about two days, according to Kernbach. The study found that in house sparrows exposed to light pollution, the infectious period lengthened by two days.

“The chance that a mosquito has West Nile Virus or contracts it from a [bird in a] light-polluted habitat and then transmits it to a human might be increased,” Kernbach added.

Past research has shown that light pollution can impact species’ immune systems. Kernbach found that birds exposed to dLAN do not secrete natural levels of melatonin at night, potentially resulting in damaged or overcompensated responses to West Nile Virus. The body and the brain both undergo different kinds of restoration during sleep, which is when the body naturally produces melatonin, a hormone that aids with sleep. However, when there is disruption to sleep patterns after lengthened exposure to light pollution, the body’s ability to fight off illnesses and viruses can become seriously weakened.

When individuals contract viral infections, their immune systems will attempt to get rid of the virus by killing the cells that have the virus. Kernbach suggests that the same applies to birds.

“In birds that are exposed to light at night, this mechanism is suppressed, so they might not be killing enough cells or they might be preventing more cell death than is necessary, which allows the virus to grow more in circulation,” Kernbach said.

The transmission cycle of West Nile Virus is fairly straightforward: Infected mosquitoes will bite birds, transmitting it through populations. But when those West Nile Virus-positive mosquitoes and birds transmit the virus to humans, the result is called “spillover,” the event during which a reservoir population comes into contact with a novel population. Coupled with longer light exposure, birds could stay awake longer and therefore interact with more infected mosquitoes.

“The scary thing is, even in the event when there’s not spillover yet, the potential for spillover to humans could increase as these birds are holding more virus for longer periods of time,” said Kernbach.

Association (IDA), which advocates for the preservation of natural nighttime environments, also notes that light pollution disrupts the natural rhythms and behavior of humans and wildlife.

“We have an overall message as an organization that encourages people to really use those sources of light that have as little short-wavelength emission as possible,” Barentine said. “So [use] the least amount of blue light, because it seems like the largest number of organisms are most sensitive to short-wavelength light.”

IDA oversees a website that allows citizens to measure and record their self-reported data on light pollution (GlobeAtNight.org). Measurements in Alameda County this year show little- to high-light pollution levels, depending on the area. Oakland had the highest light pollution level in the county. But San Lorenzo, a community just west of Castro Valley — where the dead West Nile Virus-infected house sparrow was collected — showed dozens of various measurements, varying from low- to medium-high levels of light pollution.

Barentine noted that the use of artificial light at night is increasing around the world — at a rate of about 2 percent each year. “It’s growing everywhere, and then we attach that to what we know about the ecological impacts of that energy and carbon cost,” he said. “That gives us some grounding in the significance of the problem.”

Natural light, whether from the sun or hundreds of billions of stars, has historically served as a cue for organisms. Individuals have circadian, or daily patterns, that are then disrupted by changes in light.

Kernbach suggests that some birds, like house sparrows, that normally sleep at night become more active during nighttime when light pollution is present. She said previous studies show that light pollution will increase the wakefulness of birds by up to several hours earlier in the morning as well as at night.

For instance, American robins exposed to light pollution earlier in the day will sing earlier in the morning. This means the period for bird species to interact with disease-carrying vectors lengthens if birds are awake and active for longer.


In Alameda County, three different species of mosquitoes have been found this year so far: Culex pipiens, Culex tarsalis, and Culex erythrothorax. These mosquitoes will feed in crepuscular lighting, commonly known as dusk and dawn, or at night. Kernbach says that light pollution will confuse mosquitoes into thinking that it’s sunrise and sunset constantly, meaning longer feeding periods. The Alameda County Public Health Department states that West Nile Virus has generally run from June until November.

Erika Castillo, regulatory and public affairs director for Alameda County Mosquito Abatement District, said that, previously, mosquito populations were expected to increase during the wet seasons because of their natural tendency to gather around water sources.

But because there have been fewer sources of water during drought seasons, Castillo has observed mosquitoes and birds traveling to and congregating at the same water spots, which encourages even more transmission of West Nile Virus.

Castillo explained that while the risks of contaminating yourself with a West Nile Virus-infected bird is fairly low, there is still a probable chance of transmission if body fluids are exchanged and breached through the eyes, nose, or mouth.

To combat the problem of light pollution’s link to the spread of infectious diseases, Kernbach suggests switching from the more harmful cool-white and blue lights to warmer-hues of LED night lighting, like the ones that emit warm white, orange, or yellowish hues.

But Barentine advocates for another solution. “What we really have to do is reduce the human demand for light at night,” he said. “Only if we start to eliminate where it’s truly not needed or lower it to appropriate levels, are we going to really start reducing the pressure that’s put on all kinds of species.”

Tuesday Must Read: Prop 8 Back in Court; Assembly Okays Dream...