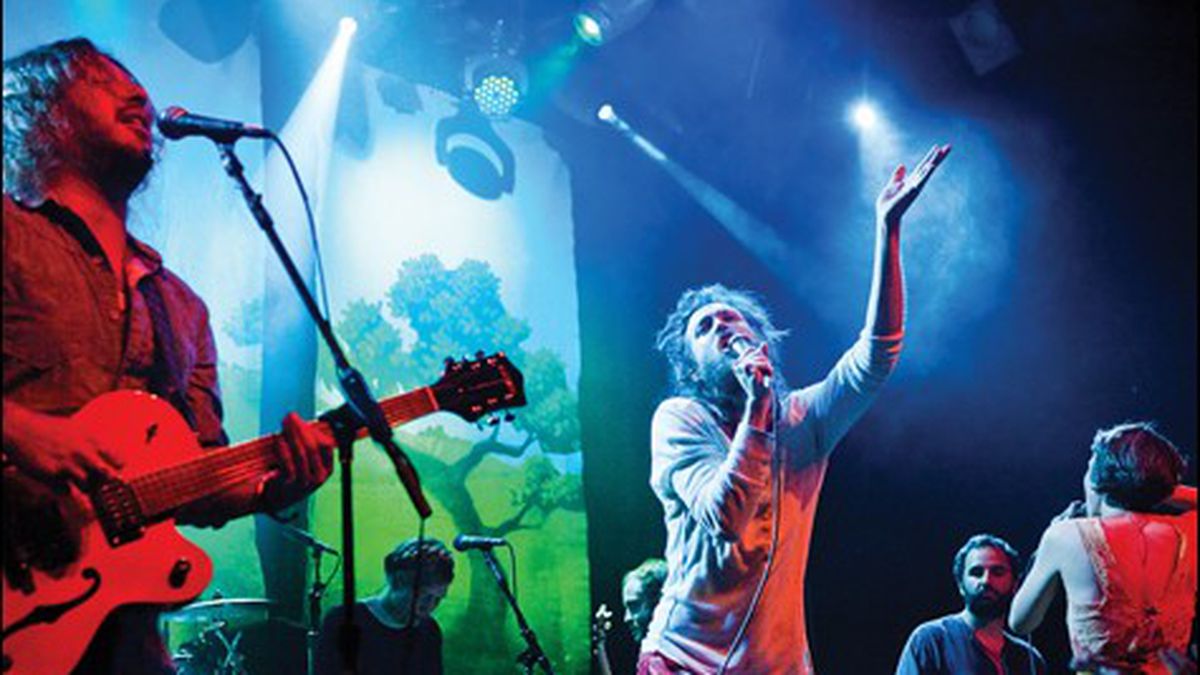 Since its 2007 inception, Edward Sharpe and the Magnetic Zeros has been consumed by the modern hippie lifestyle and a thematic search for everlasting love, while producing music that evokes remembrances of Laurel Canyon communes and midnight desert jam sessions. Having fit the bill as a band for young romantics after the breakthrough success of the single “Home,” Edward Sharpe and the Magnetic Zeros set out on Thursday night to remind a sold-out Fillmore crowd of the love that San Francisco afforded itself in the Sixties and hoped to show them a world that lives in the desert communities outside Los Angeles and away from the scope of modern indie music — the place where this eleven-piece musical cult finds its inspiration. The resulting show provided a soundtrack of rehabilitation and soul-searching, ranging from mournful croons to shouts of realization that gave the audience a sense that Edward Sharpe wasn’t just playing at the Fillmore, but in the nomadic home that had followed them north.

Even before the first note of their performance, Edward Sharpe and the Magnetic Zeros were connecting with the crowd as if they were one drink away from taking it home for the evening. Lead singer Alex Ebert rushed on stage around 10:30 with a coy smile on his face that was quickly betrayed by a 45-degree lean into the audience to give a world-record number of high fives and shoulder grabs before the music had even begun. At various points in the set, Ebert would abandon the stage entirely, jumping into the audience and shouting rousing choruses to better-known songs like “Janglin” and “Come in Please.” The chemistry with the audience was only overshadowed by the chemistry that Ebert had with the rest of his band, and watching Ebert and fellow vocalist Jade Castrinos harmonize, dance, and shoot each other knowing glances during every chaotic musical turn was like watching a triumphant honeymooning couple, although Castrinos and Ebert are no longer romantically involved. A band that many would doom to failure due to its sheer size and to its inclusion of a now-defunct couple gave a seminar on how truly fun music can be once ego is taken out of the picture, and with each dance move and handclap the pseudonymous frontman took a revivalist stance on rock ‘n’ roll and turned the Fillmore into his own personal Great Awakening.

Musically, the Magnetic Zeros were as sharp as Ebert’s stage name, taking instrumentation that would usually result in a traffic jam cacophony of sound and fitting each part into a ceaseless groove that still allowed for some improvisation within the heavily structured songs. Castrinos would insert her moonshine-smooth vocals in with harmonic ease at the same time as a previously unheard violin line would arise; all of this seemed like it had to have been pre-planned, yet was starkly genuine within its context. The Magnetic Zeros never appeared to be giving more than a commune jam session, which gave their musical message of peace and joviality even more credence for its authenticity. One of the heights of the show came during “Up From Below,” when Ebert stood triumphantly at the edge of the stage, a half-circle of fans grabbing at him like the anti-hipster Messiah whose role he looks to have inherited. Crouching down, Ebert began to whisper in his bluesy baritone “I’m gonna die,” repeating the refrain as he rose, shouted, and danced like a Baptist choir director at the joy of living despite the death that awaits us all.

Other notable moments included a cover of Bob Dylan‘s “All I Really Want to Do,” during which Ebert and Castinos traded verses, and the dark, hazy ballad “Black Water,” which sounded like an orchestral musical offspring of Frank Sinatra and Leonard Cohen. Of course, fan favorite sing-along “Home” was also a showstopper, but this was a rare audience that knew not only the words to the band’s hit track, but also vocalized every other yelp and holler from the band’s debut record Up From Below. The show concluded with the call-and-response chant of “Om Nashi Me” and a four-song encore that featured a couple of new tracks, a jam that accordionist (yes, they have an accordionist) Nora Kirkpatrick had recently written, and an acoustic version of “Brother” during which Ebert invited around thirty people onto the stage and asked everyone in the audience to sit down with him and his new compatriots. When he said at the end of the set that the band would be playing a few songs on the street afterwards, nobody doubted him, and a crowd of around a hundred people waited to watch the band roll out their piano and other instruments and play acoustic versions of a few tracks as well as some gypsy jams on the side of Geary Street.

Edward Sharpe and the Magnetic Zeros is surely a band that will be getting high praise in the next few years for its originality and musicality, but the take-home message from this infant band is to never lose the joy and fun inherent in music. Ebert and his band of Zeros looked more like children than musicians during their Fillmore gig, and the result was one of the most exciting and memorable concert experiences in recent San Franciscan memory.

The Best Neighborhood Parks in the East Bay Hills