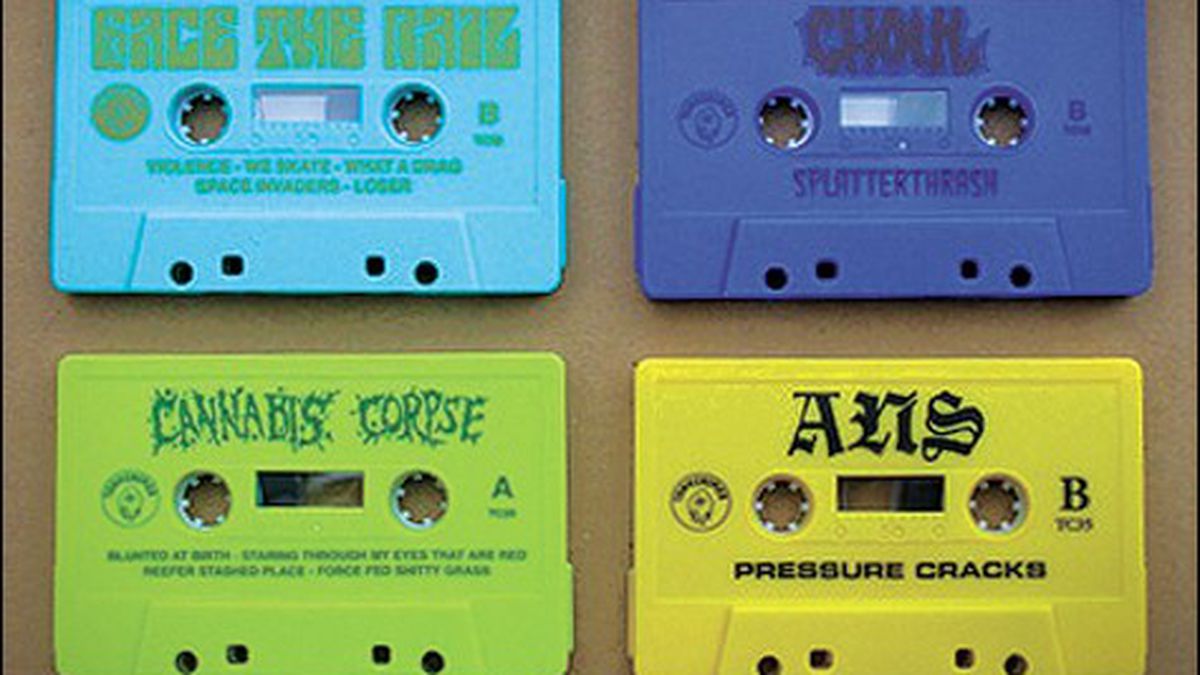 Crazy for the Cassette

A small explosion of local bands and labels are releasing material on the cheap analog precursor to the CD.

In the Seventies you had vinyl and the eight-track. The Nineties saw the rise of the compact disc. But during the Eighties, music fans bought, traded, and recorded on compact cassettes. They were cheap and prone to failure, but they also were conducive to portability, sharing, and creativity. Personalized mix-tapes became ubiquitous, as did the boxy Walkmans that played them. So as today’s musicians seek more affordable and DIY ways to share their music, it’s perhaps not surprising that the cassette tape is experiencing its second wave.

Locally, a slew of bands and record labels are embracing the cassette. Scotty Heath of Oakland-based punk and metal label Tankcrimes just released five cassettes of albums he already put out on vinyl or CD. Local band Beau Navire released its demo and a four-way split on tape. Billy Sprague started a cassette-only label, Sanity Muffin, about a year and a half ago. Local bands Butcher Cover has one release on cassette, The Aimless Never Miss have one EP on tape and a new solo release from singer-songwriter Jon Latimer, and Snailface is about to release its two albums on cassette, which will come in a “fur-lined screen-printed box,” according to bassist Ian Miller.

Most sell their cassettes online, through mail order, or at shows. But they’re also showing up at local record stores. Steve Stevenson, owner of 1-2-3-4 Go! Records, presently carries about forty to fifty tapes. Amoeba Music in Berkeley is also ramping up its section on new tapes, said Sprague, an employee.

“The last five or ten years, there’s definitely been a rise in cassette labels,” said Stevenson. “I think the charm is that they’re cheap, to get a Walkman or tape player is not expensive, a lot of people have older cars with only cassette players, so it’s handy. … A new tape sells for $5 to $6, whereas an LP is $12 to $13.” Amoeba’s used tapes sell for $1.99, and clearance tapes are just four for $1.

Cost does seem to be a driving factor for the bands and labels, most of which are underground. These days, few musicians expect to make money off releases anyway; they’re more focused on getting fans to shows and selling specialty merch like limited-edition and color vinyl. It’s not so much about owning the music as it is about supporting bands and getting cool packaging in the process. “Vinyl is so expensive — we’re lucky if we break even on vinyl,” Miller noted. “And cassettes, we make a couple bucks. The margin is better on cassettes than vinyl.”

Cassette-only labels are nothing new, Stevenson notes. The tape-only label ROIR, based in New York, started in 1979 and helped popularize Bad Brains and the Mekons. And bands in the experimental-noise scene have long released material on cassette.

But now there are labels like Fullerton-based Burger Records, which re-releases albums on tape from artists like Nobunny and Black Lips. The New York Times, after declaring that the medium had “died” in 2008, recanted in April with the headline “Hitting Rewind on the Cassette Tape.”

There’s definitely a kitsch factor involved; after all, hipsters tend to gravitate toward all things retro and ironic. “There’s a nostalgia charm to it,” admitted Mike Russo, guitarist of Butcher Cover. “It definitely seems like a trend right now.” Yet as essential as vinyl has become in some circles, tapes are easier to produce for those with limited resources. “I think when people rediscover tapes, they realize how fun they are to mess around with and make and record,” Russo continued. “And it’s cheap — that’s the thing. You can make fifty tapes for thirty bucks.”

The DIY aspect adds to the attraction. “A whole crop of DIY punk bands in Oakland are doing cassette-only — either because they can’t afford to do vinyl or because they think cassettes are even more DIY,” Miller said. “You can totally control the means of production if you’re duping them yourself.” Yet self-duplication is “very time-consuming and usually results in pretty low-quality dubs. It’s not the best and usually a huge waste of time.”

The format can be difficult to do right, especially if one is concerned about quality. The Aimless Never Miss initially dubbed 100 copies of its Tran EP on high speed, which sounded “pretty bad,” according to Latimer. He then bought new tapes and a “super-fancy one-to-one tape duplicator” to make 100 more copies. That meant he had to do it in real time. “It took me almost a week,” he said. “It was ridiculous. … Making tapes was probably the biggest headache I’ve ever gone through in putting out an album, but now I’ve learned so much.”

Command Productions, based in Sausalito, is one of the few duplicators in the Bay Area. Heath gets Tankcrimes’ tapes made by National Audio Company, which is based in Missouri. “It’s a bunch of Midwest mom-ladies standing around big tape machines,” he said, a fact he found particularly amusing considering one of his tapes was for the band Cannabis Corpse, a “death metal band all about weed.”

Cassettes also allow opportunities for creative packaging. That’s one reason Sprague is starting a series in which artists will create tapes of any sounds they want and design the packaging. For example, he says a clay sculpture artist is making “fired clay cassettes cases.”

Whatever the reason for the appeal, fans seem to be responding. Sprague says he has sold out of a handful of his tape releases. All fifty copies of Beau Navire’s demo tape sold out in a month and a half, said bassist and vocalist Jon Schmitt. Russo said all forty copies of his band’s tape sold out, and now a record store in Chicago carries them after hearing the songs played on WFMU in New Jersey. Heath said he got the biggest response he’s ever gotten after putting photos of his finished tapes on Facebook.

Not that there aren’t people who aren’t exploiting this. “The thing is, tapes have been getting popular lately in the punk underground, but a lot of it is bullshit,” Heath noted. “A lot of it is collectible — they’re limited and go straight to eBay. I have no interest in doing that.” Heath calls the types of fans who buy into that “Pokemon punks.” “They gotta collect. Is it collecting like a toy or figurine or are you collecting actual music?”

Some are even semi-mocking the trend. Miller says his band’s decision to release its two albums on cassette was partially because the idea seemed absurd. (Snailface is a jokey project of the members of Kowloon Walled City.) “We needed something spectacularly stupid to match our spectacularly stupid music — and cassettes and yeti fur seemed to be the way to go.” (The band’s second album is all about yetis.) “I’m totally into it, frankly. I have very fond memories of making mix tapes.”

Unlike vinyl, whose popularity in part can be attributed to the warmth of its sound, cassettes elicit varying opinions about the quality. “I just love the way tapes sound — it’s a more saturated bass compression,” said Latimer of The Aimless Never Miss. “When a tape’s beat up, it’s like an old shirt — it’s even better than it was before.”

But Stevenson of 1-2-3-4 Go! Records doesn’t think the cassette trend isn’t about sound quality. “I think there’s probably also a disposable aspect to it,” he said. “The people who are buying tapes are college-age people. There’s not an audiophile resurgence. These are people who have limited funds.” Stevenson also doesn’t think the tape resurgence is on par with vinyl, or ever will be. And the numbers back that. According to Nielsen SoundScan, vinyl had its biggest year in sales last year since 1991 (2.5 albums sold), while compact cassettes saw its lowest year (34,000).

Which begs the question: Is this largely just a flash-in-the-pan fad? “We’ve had people tell us, ‘Oh it’s a hype thing, it’s gonna die, it’s one of those ironic things to do,'” said Schmitt. “There is some truth to that. It’s the same thing as having handlebar mustaches again. It’s awesome, it’s cool, it’s fun — for however long the thing will last.”

Oakland Artist Bindiram Wants to Put Guyana on the Map

Oakland Councilmembers Question Police Overspending to Crack Down on Protesters