Her "rummaging" around concrete structures are photographed with captivating clarity. 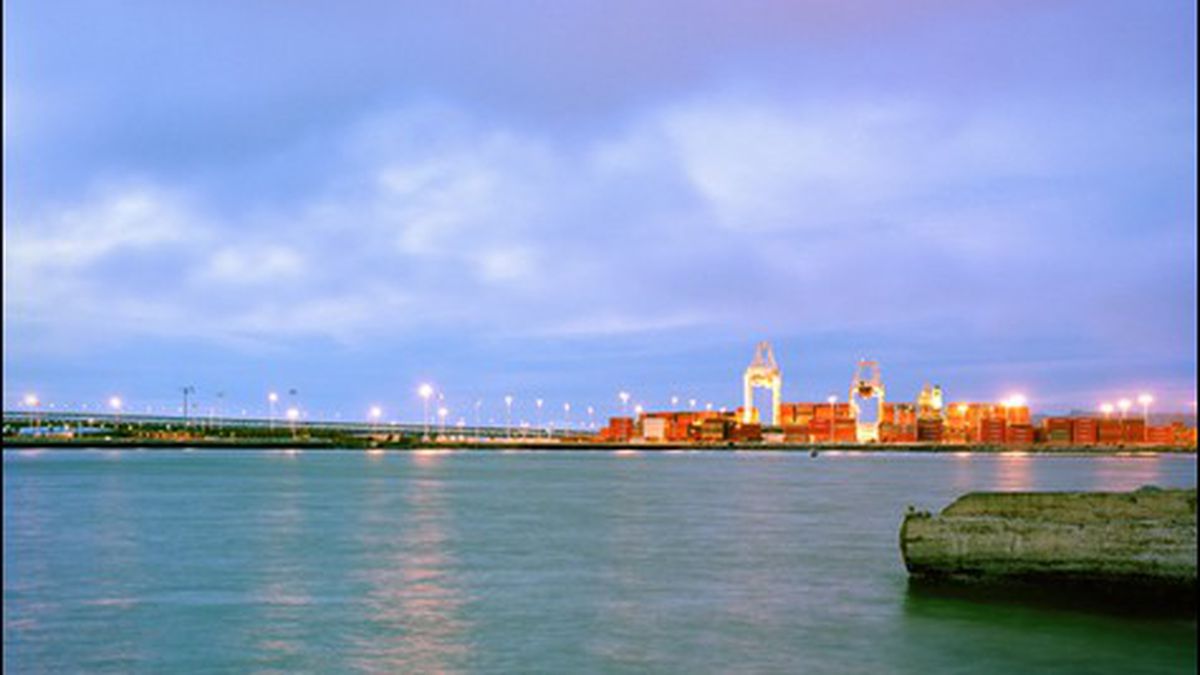 At first glance, In/Finite Potential, Johnna Arnold’s series of C-print photographs, seems run-of-the-mill. With the captivating clarity of 4×5 film, they sublimely picture the utilitarian structures of the urban landscape: shipping crates along the port, tunnels, freeway overpasses, and the like. If there is one pronouncedly interesting thing about this group, it is the fact that each image captures the transitional light of sunset, dusk, or post-dusk (what could also be dawn and pre-dawn), imbuing the generally unpeopled photographs with a silent, melancholy magic.

Upon closer inspection, however, unexpected elements begin to reveal themselves. For one, the photographs are not entirely unpeopled; rather, in each the artist herself appears as subject, interacting with her concrete environment in ways not prescribed by the structures, which are built for ships or cars. In one, she clings to a concrete slab jutting out into the Oakland port, claiming an unsanctioned (and precarious-looking) vantage point of the goings-on of import-export shipping. In another, she attempts to scale the man-made (or at least manicured) rock wall flanking a freeway.

An up-close view of the photographs yields another curiosity: horizontal streaks of pink or red light — the trails of speeding cars, captured by long camera exposures. Further illuminating the transitional quality of these images, these streaks also call attention to the fact that not just the built environment but Arnold, too, must have kept perfectly still for the duration of the shots. Thus, she places her human subject in a relationship of curious equivalence with the structures that dwarf her.

Arnold began by photographing just the freeways, she explained, but came to feel that this approach was bound to suggest an attitude of distance and reverence, registering none of the complexity that she, recently back from farm life, felt toward the speed-conducting behemoths. “The structures are massive, and from outside of a car they are frightening,” she said. “By rummaging around, on, and under the freeways I get a rush of excitement — the fear, mixed with my knowing misuse of a place, simply by being in it — morphing between an act of rebellion and appreciation.”

Arnold’s use of the figure to activate environments works well when it feels like genuine play. However, it is also risky, and renders several of the images trite. For example, the shot of the figure apparently staring at her own shadow beneath a freeway overpass is leaden with superficial gravity; the one of her drawing a chalk heart beside a tunnel is cloyingly precious, and the one of her relatively tiny figure gazing up at a towering bridge does exactly what Arnold set out not to do: monumentalize the built environment from afar.

Arnold is right that “rummaging” about these environments, which do not operate at the human scale, holds the potential to land her in a very interesting place “between rebellion and appreciation.” Being able to hit it with consistency will be a matter of fine-tuning her style. In/Finite Potential runs through May 18 at Traywick Contemporary (895 Colusa Ave., Berkeley). 510-527-1214 or Traywick.com

Correction: The original version of this report misidentified the format Johnna Arnold used for her photographs. She used 4×5 film, not digital. Also, Arnold appears in all the photos.