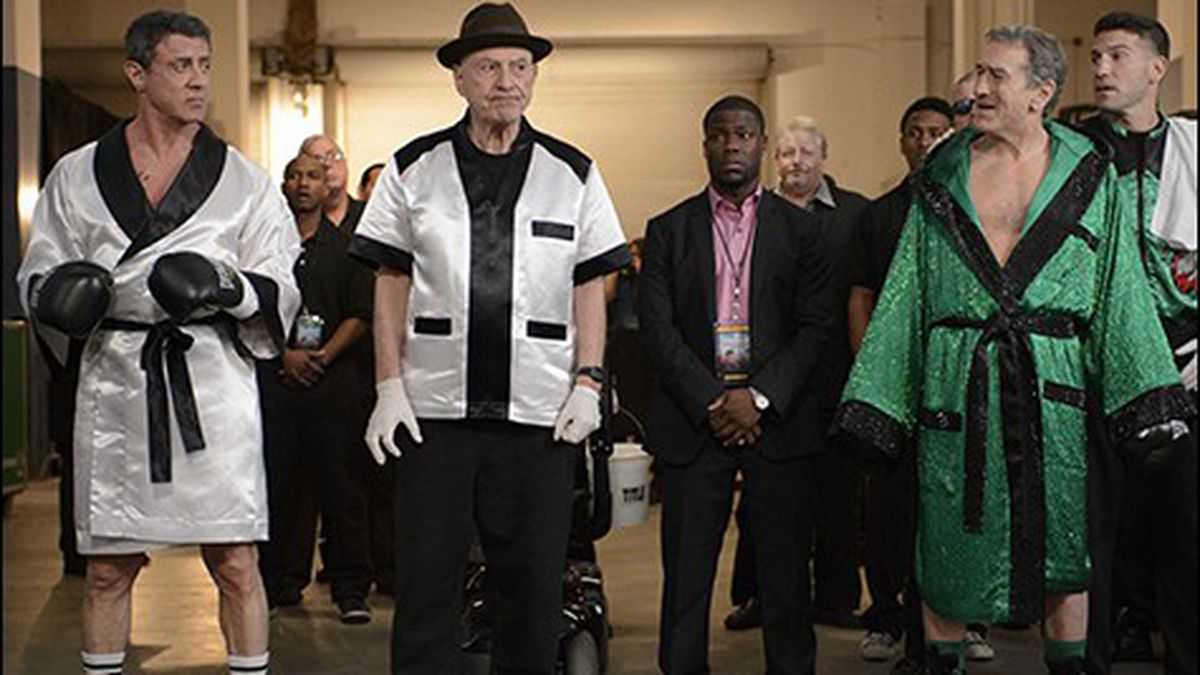 With apologies to August: Osage County, Robert De Niro and Sylvester Stallone’s Grudge Match is the male equivalent of the same general formula. Senior-citizen romps are much more common on the guys’ side and vastly more annoying, thanks to The Bucket List and the tidal wave of geezer comedies that 2007 hit inspired — they’re usually comedies for some reason. If we see Morgan Freeman or Arnold Schwarzenegger outfox a gang of younger criminals one more time, we’ll take a nosedive into a tray of vodka-and-Viagra cocktails.

Grudge Match tries to be different. Tim Kelleher and Rodney Rothman’s screenplay takes advantage of each actor’s (arguably) most popular movie role, in Raging Bull and Rocky, to make fun of their screen images as well as their characters. Billy “The Kid” McDonnen (De Niro) and Henry “Razor” Sharp (Stallone) fought two light-heavyweight title bouts against each other back in the day, each winning one. Now the world is ready for the tiebreaker, opines promoter Dante Slate Jr. (Kevin Hart), even though the Kid, a successful auto dealer and club owner, is paunchy, and laid-off working stiff Razor is worn out. They already hate each other, so getting them into the ring is easy. Bingo. De Niro and Stallone are hilarious together.

Predictable gags follow, but the dialogue is witty and both fighters have a weary pugnacity about them. Never mind that De Niro and Stallone belong in different weight classes. (In 1980 when Raging Bull was made, the man who trained De Niro claimed the actor could have been a ranking middleweight.) Matters are further complicated by the presence of Sally (a well preserved Kim Basinger), former girlfriend of both men and mother of a young man (Jon Bernthal) who may or may not be the Kid’s son. But the smartest second-tier casting decision was getting Alan Arkin to play Razor’s father and ring man, Lightning. At age 79, Arkin is the funniest character in every movie he makes. And he looks lean and quick enough to whup both Bobby and Sly.

The TV commercial parodies and sight gags are especially good — Geritol sponsored the big match, and the fighters shoot a nutty casino ad. The Kid and Razor show their disdain for MMA fighters by thumping one of them. So what if Dante ideally should have been played by Eddie Murphy? Maybe they were over budget.

Facebook
Twitter
Previous articleBreathalyzer for Pot Hits Los Angeles
Next articleThursday Must Reads: Oakland Airport Connector to Open This Year; Soda Tax Would Save Up to $1 Billion in Healthcare Costs
18,639FansLike
0FollowersFollow
67,429FollowersFollow

Taking the Fight to Desley Brooks

Rolling Stone’s Ben Fong-Torres Joins Us in The Studio for ‘The...

New Radio Station to Predate the Canyons of Your Mind