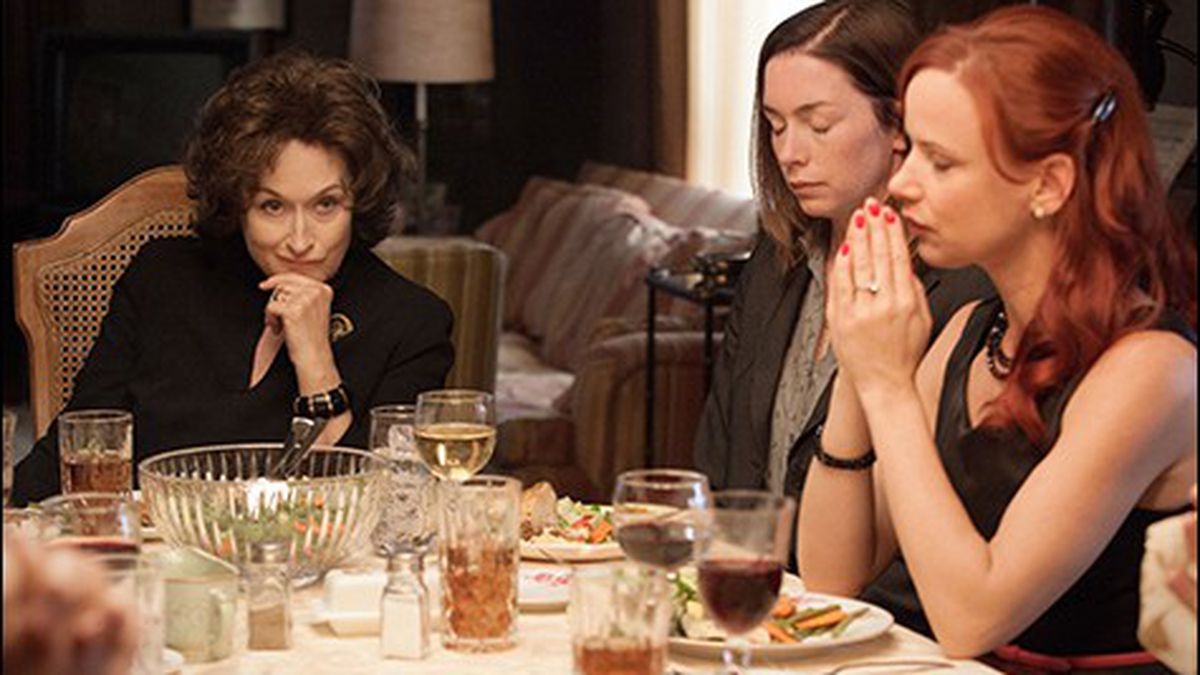 If there’s one thing someone could learn from sitting in dark theaters staring intently at giant screens several times a week for years, it’s to never judge a movie by its advertising. There’s no such thing as an unfashionable genre or a taboo subject. To dismiss a new release beforehand, sight unseen, solely because we think we don’t like, say, teenage romantic comedies or zombie pics, is demonstrably unwise. Eventually we’ll miss a masterpiece, and we’ll probably be selling ourselves short. It’s a wide world out there, and chances are even the dumbest-looking film has been made by someone smarter than we are — or at least someone equipped with an unexpected point of view.

Case in point: August: Osage County. From its cast — Meryl Streep, Julia Roberts, Julianne Nicholson, Abigail Breslin, Juliette Lewis, Margo Martindale — and the ads depicting a comic (we might hope) tussle with Streep on the bottom of a pile-on, we were expecting one of those “granny movies” — à la Fried Green Tomatoes, Steel Magnolias, Come Back to the 5 & Dime, Jimmy Dean, Jimmy Dean, or, heaven help us, The Trip to Bountiful — a subgenre in which three generations of women, usually Southern and almost always closely related, get a snoot full of bourbon and commence to cuttin’ each other down verbally until one of ’em snaps and gets the big-mouth one in a headlock. That tears it. And then they all start cryin’ and carryin’ on and forgivin’ each other, and then the Widow Douglas stands up and reckons the lord loves them all the same no matter what they done. That’s right before Huck lights out for the territory. He left on account of the bawlin’ and the rasslin’ match. There ain’t no other way to explain it.

August: Osage County is not much like any of that. In the first place, it’s adapted from a Pulitzer Prize-winning play by Tracy Letts. Chicago playwright/actor and Oklahoma native Letts wrote Killer Joe and Bug, two films with a scarcity of meddling old schoolmarms, for director William Friedkin — so even with the Southern ham-hock-and-butter-beans tilt we know we’re potentially wading into psychological deep water whenever Letts gets characters like bossy matriarch Violet Weston (Streep) and her rebellious daughter Barbara (Roberts) around a country dinner table.

Streep cornpones it up shamelessly, and she’s terrific. So are Roberts and also Nicholson, in the role of Vi’s youngest and most sensitive daughter, Ivy. In the absence of her writer husband Beverly (Sam Shepard, who also handles the voiceover narration), Mama Vi is a bitter, pill-popping, booze-guzzling bully, forever picking on her family, especially middle daughter Karen (Lewis), just in from Florida with her shady fiancée Steve (Dermot Mulroney). Cousin Little Charles (Benedict Cumberbatch), stammering son of Vi’s sister Mattie Fae (Martindale) and her husband Charles (Chris Cooper), takes his share of abuse as well. The only one who dares to yell back is Barb, although Charles politely takes issue.

Over iced tea and fried food, Vi is ready to announce who will inherit her money, but first she delivers the sort of drunken lecture at which Streep excels, pointing out each family member’s faults with extreme prejudice. Blood begins to boil. Running around waiting on all these combatants is Johnna, the Native American maid (Misty Upham from Frozen River), whom Vi calls “the Indian girl.” The only question is which houseguest is going to jump up and smack the old nag first.

The story is a congealed mass of clichés, but with that cast and Letts’ talent for animosity we can safely forget about all previous hen parties and just sop it up like gravy bread. Director John Wells, a TV vet (Southland, Mildred Pierce), is smart enough to hide behind the furniture and watch Streep destroy the dinner party. We’ll do the same with a crooked smile on our face.