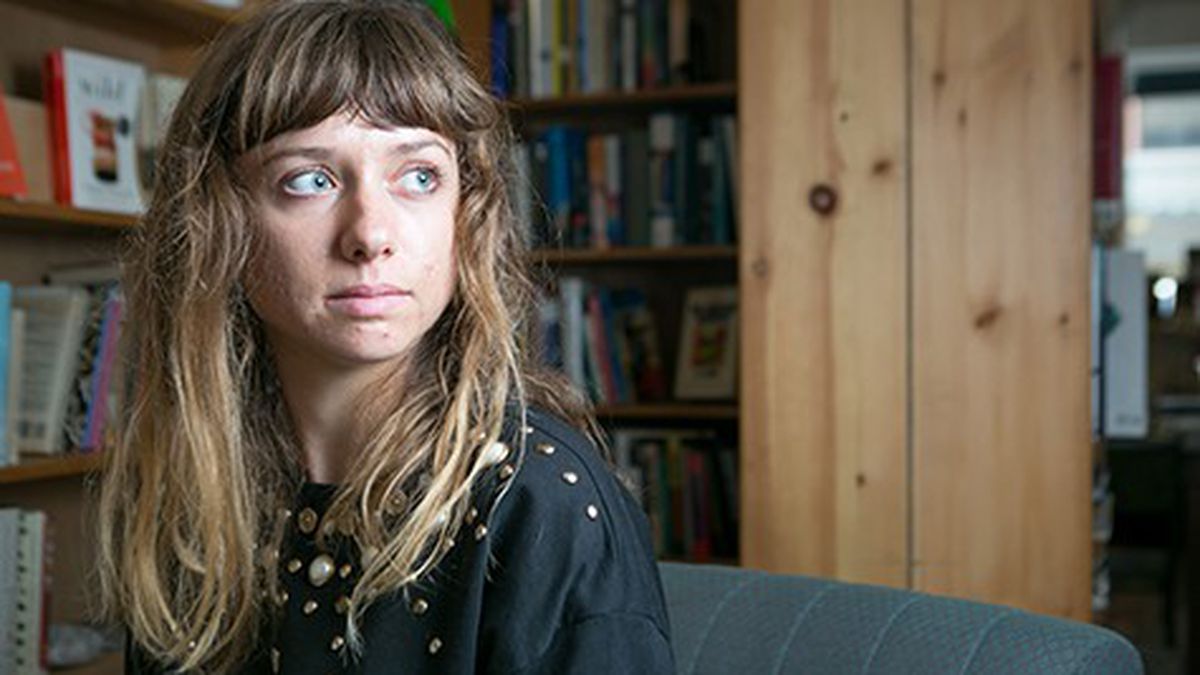 The musician invokes tarot, sad girl theory, and the American Southwest on Across That White Plain.

No tarot card looks as gruesome as the Ten of Swords. In the Rider-Waite deck, a corpse lays flat in the dirt, skewered by ten long, upright blades. A black sky looms in the distance. Like all tarot cards, its significance is somewhat flexible, but the card is strongly associated with an emotional or existential bottom.

Death, the card, is preferable.

“Ten of Swords” is also the opening song on Across That White Plain, the latest album of Jennifer Williams‘ musical outlet, Gossimer. “When I first got the deck, I kept pulling that card,” said Williams, standing behind the counter of E.M. Wolfman, the downtown Oakland bookstore and local alt-lit fixture. “Well,” she hesitated, eyeing a shopper. “The card made me anxious.” Somewhat guarded in conversation, Williams echoed the evocative minimalist imagery that distinguishes Across That White Plain.

“On tour in the Southwest, I noticed how the sprawling, empty landscape is actually spotted with boulders,” she said. It’s an apt image for the album. An excellent suite of forlorn songs bound by fingerpicked acoustic guitar, it’s speckled with spectral, fleeting samples and subtle intrusions of quiet noise. Williams’ lyrics, at times delivered in a near-whisper, are similarly sparse. There are no choruses, and most songs contain only two or three lines, but the few elements are wholly engaging.

“Ten of Swords” incorporates a snippet of Nico’s Desertshore, an album of harrowing, austere songs featuring the German chanteuse’s harmonium playing and inimitable vocal delivery. Williams cited Desertshore as an influence and spoke of Nico’s biography. The singer’s story is typically told as a tragic spiral into addiction and death, but Williams spun it a little differently. “She was aware of the power of her beauty but uncomfortable with all of the value placed upon it,” she said.

Williams characterized Nico as an emblematic “sad girl,” referring to a new school of thought that regards archetypal gestures of feminine suffering not as pitiful or sick but empowering and even radical acts of protest. Sad girl theory significantly informed the persona Williams inhabited while writing and performing Across That White Plain.

Williams, who moved to Oakland in 2012 to study writing at Mills, began recording Across That White Plain a day after graduating last year. Throughout 2014, she dealt with a breakup and toured the Southwest four times, two experiences that left deep impressions on her songwriting. For one excursion, Williams and a friend, who performs as Geological Creep, augmented the Knight of Cups tarot card for a tour poster.

“The Knight of Cups is also known as the Prince Charming card … [but] we erased him, leaving only the landscape,” she said. “It felt symbolic of our intentions for that tour — to live without the idea of Prince Charming, or even the idea that anyone could fulfill all your needs and expectations.”

During this period, Williams said, “I started singing faintly, sometimes as if I was holding back tears. I wore black to every show and never spoke while I was performing.” She continued, “[I was] walking this kind of fine line between honoring and satirizing my sadness.”

As much as Across That White Plain indulges in musical tropes of sadness, it’s also laden with signs of renewal. One of the best songs, “As an Old Man Weeding,” pivots into a brighter key and brisker cadence about halfway through. Williams said that the vocal lines were recorded months apart. Their opposite-in-mood-yet-complementary parts illustrate how lows are inseparable from new beginnings. Meanwhile, “Cedar Wash” references road signs that indicate flood canals in rural regions — mechanisms of cleansing.

Williams, a published poet, is also writing a novel. It’s written from the perspective of an eight-year-old girl, and deals in part with constructed notions of womanhood. Williams’ music-making, she explained, similarly questions gendered expectations. “There’s this push for women, especially playing music, to be louder,” she observed. “I also think that being quiet and soft has its own power.” But moreover, Williams considers the loud-versus-soft dichotomy too limiting. “To me, feminism isn’t only about being louder or tougher, but not assigning such values.”

While she completed her shift at E.M. Wolfman, Williams played the punchy and festive glam rock band Roxy Music. Wearing all black, she patiently attended to a lot of helpless adults who’d apparently never browsed for books. She spoke frankly of decisions she’d come to regard as mistakes, about how the boundary between a sad girl musical persona and real life can become porous. Across That White Plain is grounded in suffering, but diligent listening leaves a more ambiguous impression, which partly accounts for the album’s enduring appeal.

It’s easy to overlook in the scene of violence and treachery, but the Ten of Swords card, Williams noted, features the cusp of a radiant dawn.

Best Sushi Joint to Get as Drunk as a Japanese Salaryman

Naomi Then and Now