1. The pricetag for the Golden State Warriors’ proposed new arena on the San Francisco waterfront continues to skyrocket and team owners acknowledge the increased costs will delay the project, the Chron reports. The cost to repair piers, which would only ready the site for construction, has climbed to at least $180 million. The $1 billion-plus project, which includes condo and hotel towers, also must go before city voters. 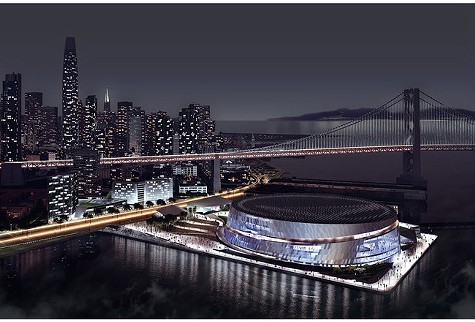 2. The Sierra snowpack is at an all-time low for this time of year, and stands at just 12 percent of normal as the state’s historic drought continues to intensify, the LA Times$ reports.

4. The US Labor Department has launched a probe of the Oakland Raiders’ treatment of cheerleaders, following a lawsuit filed by a Raiderette who said the team pays them less than $5 an hour in violation of minimum wage laws, the Chron reports.

5. Jill Broadhurst, executive director of an Oakland landlords’ group, announced that she’s running for city council this year to replace Libby Schaaf, who is giving up her seat to run for mayor, the Trib$ reports.

6. A state appeals court has ruled that tenants living in a building that goes through foreclosure cannot be evicted until their lease expires, the Chron reports. Many tenants were evicted — apparently illegally — in recent years during the foreclosure crisis.

7. An independent — and highly critical — report has concluded that Caltrans needs sweeping reforms, the SacBee$ reports. The report found that Caltrans is much too focused on building highways rather than working to improve mass transit and increase urban density, and that the department fosters a “culture of fear” within its ranks.

8. And liberal Democratic Congressman Henry Waxman of Southern California announced that he’s retiring from office at the end of this year. Waxman was a longtime champion of healthcare reform and environmental issues.