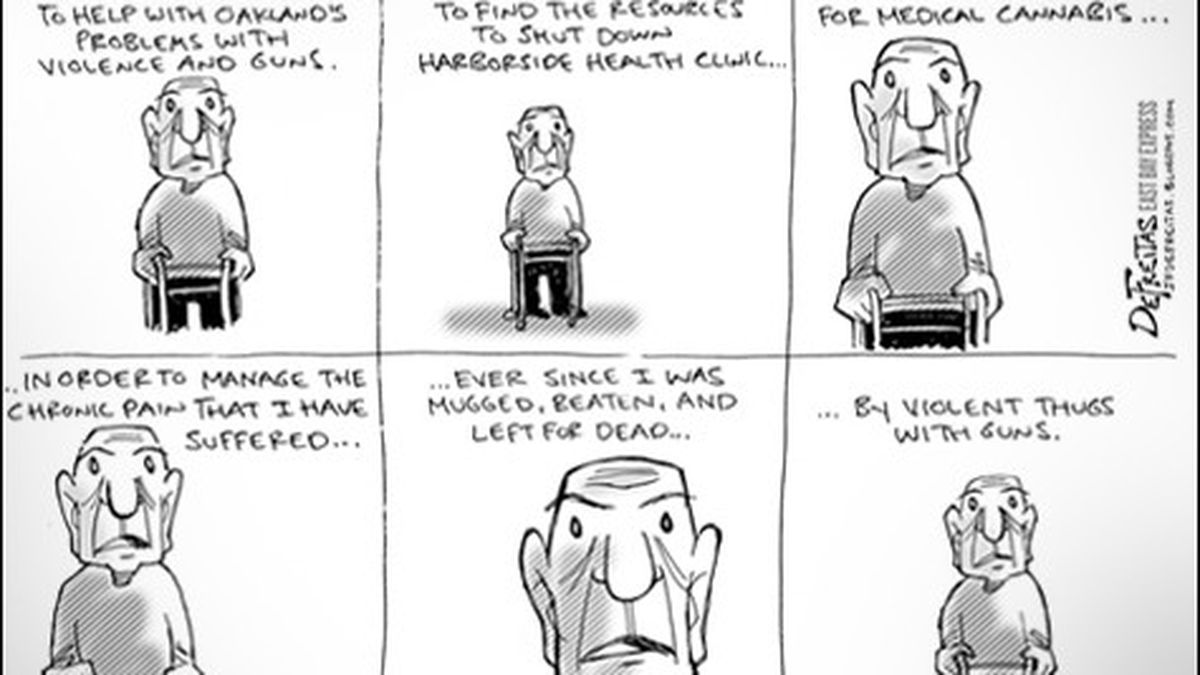 Criticism of Rebecca Kaplan Is Misguided

The Oakland councilwoman was right to criticize the federal crackdown on medical pot and to ask the feds for more help in targeting guns and violence.

Over the past few weeks, Oakland City Councilwoman Rebecca Kaplan has come under fire for publicly objecting to the federal crackdown on medical cannabis and the attempt by US Attorney Melinda Haag to close Harborside Health Center. San Francisco Chronicle columnist Chip Johnson and Oakland Tribune columnist Tammerlin Drummond both argued that Kaplan’s objection to the crackdown was wrongheaded and that she should have focused instead on the spike in violent crime in Oakland. But the criticisms of Kaplan are not only misguided, they’re ridiculous.

For starters, both Johnson and Drummond downplayed one of Kaplan’s legitimate criticisms of the federal crackdown and the targeting of Harborside — that federal law enforcement should not waste precious resources trying to shut down law-abiding businesses and instead should step up efforts to help Oakland deal with gun violence. After all, the proliferation of guns is at the root of why violent crime continues to plague the city.

“If federal prosecutors have extra time available, I ask — on behalf of my constituents all across the city — that they instead prosecute the illegal gun dealers who are the source of death and violence in Oakland,” Kaplan said after news that Haag was trying to close Harborside. “Federal agents have worked successfully with local law enforcement this year to go after guns and violence — and we are deeply thankful and appreciative of that help. That’s what we need more of. If there are federal resources available, we need them directed against the violent perpetrators and co-conspirators of the senseless gun violence on our streets.”

In other words, Kaplan was doing precisely what Johnson and Drummond had demanded in their columns. She was publicly addressing Oakland’s ongoing struggle with violent crime, and was putting forth a reasonable plan for how to deal with it.

There’s also proof that her proposal works. Throughout much of this year, federal agents, led by the Bureau of Alcohol, Tobacco, Firearms, and Explosives, have worked closely with Oakland police to target criminal drug gangs — the very people who sell drugs illegally and kill people in turf wars. The operation, Project Gideon III, resulted in 60 arrests and the seizure of 92 firearms.

Prosecutors also announced last Friday that the joint federal-local effort had resulted in the apprehension of the gang members who allegedly murdered 23-month-old Hiram Lawrence Jr. last fall. A stray bullet killed the toddler. That shocking killing, it should be noted, prompted columns from both Drummond and Johnson, again decrying violent crime in Oakland and criticizing city leaders for not doing more to address it.

It turns out they did do more — with the help of federal law enforcement. And it looks like they actually caught the perpetrators who fatally shot Hiram. And the feds did it by doing exactly what Kaplan recently proposed: helping Oakland to go after guns and violent crime.

Moreover, the tragic mass shooting in Colorado last Friday further highlighted the scourge of guns in this country. Police said that one of the weapons used by alleged killer James Eagan Holmes was an AR-15 assault rifle — a deadly firearm that is designed to kill lots of people quickly and so is subject to gun-control restrictions in other countries. The United States, of course, is a different story. Federal authorities said Holmes bought his weapons legally at sporting-goods chain stores.

But Johnson and Drummond appear to have no interest in asking federal authorities to help Oakland police clamp down on the local gun trade. In fact, it’s hard to know what Drummond proposes that Kaplan and Oakland officials do to fight crime — other than hire more cops, which she again called for in one of her columns earlier this month.

In another column, Drummond argued that Haag’s attempt to close Harborside is warranted because she contends that people who have no legitimate need for medical cannabis are obtaining it after getting illegitimate recommendations from unscrupulous doctors. Drummond has no evidence to back up her assertion, but even if she’s right, it’s not Harborside’s fault.

By all accounts, Harborside has a strict system for checking doctor recommendations. Furthermore, it’s the responsibility of the California Medical Board — not dispensaries — to investigate shoddy physicians. And the board, according to spokeswoman Chris Valine, investigates and disciplines unscrupulous medical marijuana doctors just like any other doctor who prescribes pharmaceutical drugs to patients who don’t need them. In other words, by Drummond’s logic, it would be okay for the feds to shut down pharmacies because they’re dispensing drugs at the request of bad doctors.

As for Johnson, he, too, has repeatedly called for the cash-strapped city to add more police officers. And he has strongly advocated for a youth curfew and more gang injunctions — even though there’s no proof that curfews lower violent crime rates, and gang injunctions in Oakland have proven to be cost-prohibitive. Johnson also recently praised San Francisco Mayor Ed Lee for proposing that his city look at allowing police to stop-and-frisk residents, even though New York’s program has resulted in cops disproportionately targeting young people of color.

It seems clear that Johnson’s proposals are never going to fly in a progressive city like Oakland, especially when many people already contend that they’re victims of racial profiling. Also, some Oakland residents aren’t keen about adding more cops to the city’s dysfunctional police department — a department that has a long, troubling history of killing unarmed suspects, particularly young black men.

Finally, there’s this: Oakland has no money to hire more cops. In the past few years, the city has been forced to drastically slash public services, including police, because of plummeting tax revenues due to the Great Recession. In fact, things would be worse if it weren’t for the tax revenues produced by medical cannabis sales. The medical cannabis boom in Oakland has been one of the few bright spots during the economic downturn.

And that was the other main argument Kaplan was making in her critique of the federal crackdown. Harborside Health Center alone produces more than $1 million in income for the city each year. That’s enough to pay the salaries of at least five Oakland cops plus their pensions and benefits. In short, if the feds close down Harborside, the chances of the city doing what Johnson and Drummond want — hire more police officers — will be even more remote than it already is. &#8;