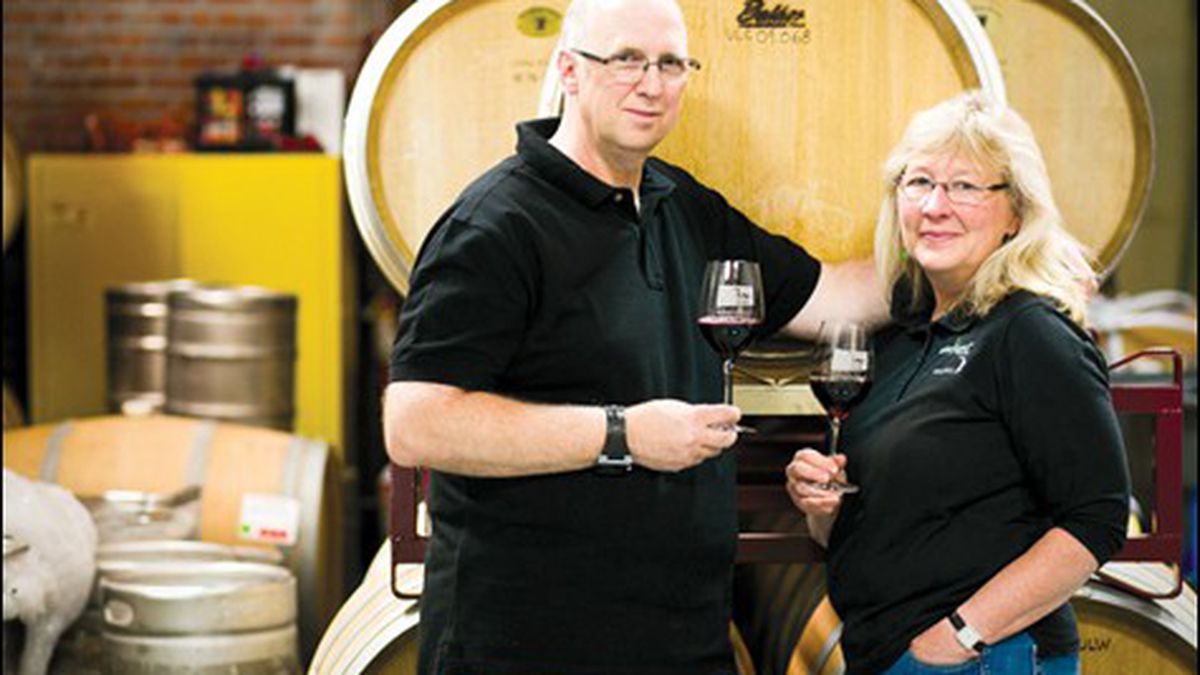 Wine Country, in the City

The number of East Bay urban wineries is growing, as both vintners and consumers realize the economic and environmental benefits.

When Steve Shaffer decided to get out of the tech world and fulfill a long-held dream of owning his own winery, he and his wife, Marilee, figured they’d have to relocate to one of the usual suspects: Napa, Sonoma, the Sierra foothills — one of those places where the vineyards seem to roll on forever, the air always smells like grapes, and everyone else in town is also in the wine business. But they’d lived in the country before, and the more they thought about it, Shaffer said, “the more we realized, it’s beautiful, it’s bucolic — but it’s boring.” The two ended up founding their winery, Urban Legend, in a nondescript brick warehouse on a quiet stretch of Fourth Street in Oakland’s Jack London district, and they’ve never looked back.

“It just makes so much more sense to put a winery out here than in the country,” Shaffer said. “In terms of your carbon footprint, in terms of the variety of grapes you’re getting, it’s just a good idea.” Here, the Shaffers are closer to their client base, closer to their home, closer to the people who can repair their machinery. They get to know their customers and their customers get to know them — even if a lot of those customers find them by accident. “I think a lot of people are surprised to find a winery here,” he said. “And they’re even more surprised when I say there are about a dozen in town.”

According to Kevin Brown, co-owner of Alameda’s R&B Cellars and president of the East Bay Vintner’s Alliance, there are at least 25 wineries in the urban East Bay. In fact, though comprehensive statistics are mutable and hard to come by, we’re in the middle of what’s often said to be the densest urban commercial winemaking environment in the country. And with the exception of some early adopters like Alameda’s Rosenblum Cellars, which was founded in 1978, the vast majority of these have sprung up in recent years.

They’re part of a long history: For about forty years starting in the 1880s, the Bay Area was home to some of the biggest winemakers in the nation — first in downtown San Francisco, before the 1906 earthquake, and then in Point Richmond, which was, between the earthquake and Prohibition, home to the largest winery in the world, Winehaven.

It wasn’t until the Seventies that the California winemaking industry came to be so rooted in Napa and Sonoma, and that was mostly for reasons of a back-to-the-land philosophy than because of any practical competitive advantage, said Brendan Eliason, owner of Oakland’s Periscope Cellars and, as it turns out, a bit of a wine-history buff. In fact, he said, in many ways, rural areas are poorly suited to industrial wine production.

“Those are great areas to grow grapes in, but the truth is, they’re awful to make wine in,” he said. And he would know; he spent ten years working as a winemaker in northern Sonoma County before opening Periscope. “They are small, rural towns. The electricity sucks. The access to water sucks. The wastewater management sucks. The size of the roads for trucks sucks. You’re out in the middle of nowhere with no easy access to supplies or anything else like that. If you look at the current political battles in Napa and Sonoma especially, but really Mendocino and Paso Robles and any major wine region in California, it’s a tale of minimal resources. … You have hundreds of wineries fighting over these meager resources and they’re really only meager because you’re in the wrong spot.”

There’s a reason wineries have historically set up shop in cities, Eliason argued, and there’s a reason they’re coming back. “If you really want good infrastructure for making wine, we’re sitting in it,” he said. “A lot of people have only just started to realize it, but there are so many benefits to making wine here.”

Economics, for one. “It’s a lot cheaper,” Bob Rawson of Urbano Cellars said, laughing, when I asked him why he decided to found his winery in Berkeley.

The electricity, access to water, and other infrastructure Eliason mentioned cost money, after all — and according to Shaffer, the cost (not to mention the carbon footprint) of trucking fully prepared and packaged bottles of wine is significantly greater than the cost of shipping the raw grapes and bottling the wine closer to consumers.

“Glass is much heavier than people realize,” Eliason noted.

In Berkeley, Rawson, said, “Basically, all we need is a warehouse space that either has or can put in a minimal amount of infrastructure.”

Even as the wine industry has continued to be hit hard by the recession and its aftershocks, property values in Sonoma and Napa counties have, by and large, continued to rise precipitously, to the degree that it’s all but impossible for a small-scale entrepreneur — a Shaffer or an Eliason or a Rawson — to even get in the game. The city, on the other hand, has far fewer barriers to entry — and those savings often get passed onto the consumer. “There is the romance of the vineyards and the oak-paneled tasting room and the guest cottage and all that,” he said. “But at an urban winery, the money you’re spending is being [put] toward what’s in the bottle. It’s going to the steak and not to the sizzle.”

That’s not necessarily to say that the East Bay’s urban wines are always cheaper: According to David Sharp of Temescal wine shop The Wine Mine, in terms of economies of scale, sometimes low overhead can get canceled out by a tiny yield. But they do offer a particular bang for one’s buck. Because small, urban wineries don’t own the land on which the grapes they use are grown, opting to contract out with vineyards (some on a short-term basis, others for seasons at a time, and with varying degrees of control and input over the harvesting process) they usually have a bit more control over their wines. And because the Bay Area is located where it is, the East Bay’s urban vintners have access to grapes from both Northern and Central California.

“Being small like we are avoids the bigger wineries’ problems of making everything grow well on a single plot of land,” said Adam Love of Two Mile Wines. That means Two Mile gets its grapes wherever they grow best — Sangiovese from Dry Creek, Petite Syrah from Livermore, Viogner from the Central Coast — and is freer to experiment with certain regions, grapes, and types of wine. “You do find a little bit more variety, since they aren’t growing the grapes themselves,” Sharp added. There’s certainly a range, he noted, but “they can make some very, very good wines.”

Perhaps unsurprisingly, Brown, of the East Bay Vintner’s Alliance agrees: “These are some world-class wineries,” he said, referring to the alliance’s membership. “It’s not just some funky offshoot. You’re talking very high-caliber producers.”

Customers, by the way, seem to agree. Though margins in the wine industry have always been slim, all the winemakers I spoke to said business was good. In many ways, that should come as no surprise: The urban winemaking movement fits in well with both the artisan and locavore movements, two larger trends that hit around the same time as urban winemaking and have lodged themselves firmly into the East Bay’s eating and drinking culture. As people — especially people around here — continue to think of grocery shopping as a political act, to question the value of food that’s mass-produced and shipped in from afar, and to be interested in who, not what, is making what they’re eating, it makes sense that they’d also begin doing that with their wine.

“If you drink a bottle of my wine, you probably bought it from me,” Eliason said. “I like that, and my customers like that.” Further, he said, as the wine industry grows up, wine-drinkers in general are becoming more open to vintners and labels that don’t necessarily fit a preconceived notion of what a winery is or should be. “American wine culture is still very young,” he said. “Many people still just associate a big fancy chateau with good wine, but I really think that’s changing. We will continue to grow.” And in the meantime, he’s very happy where he is.