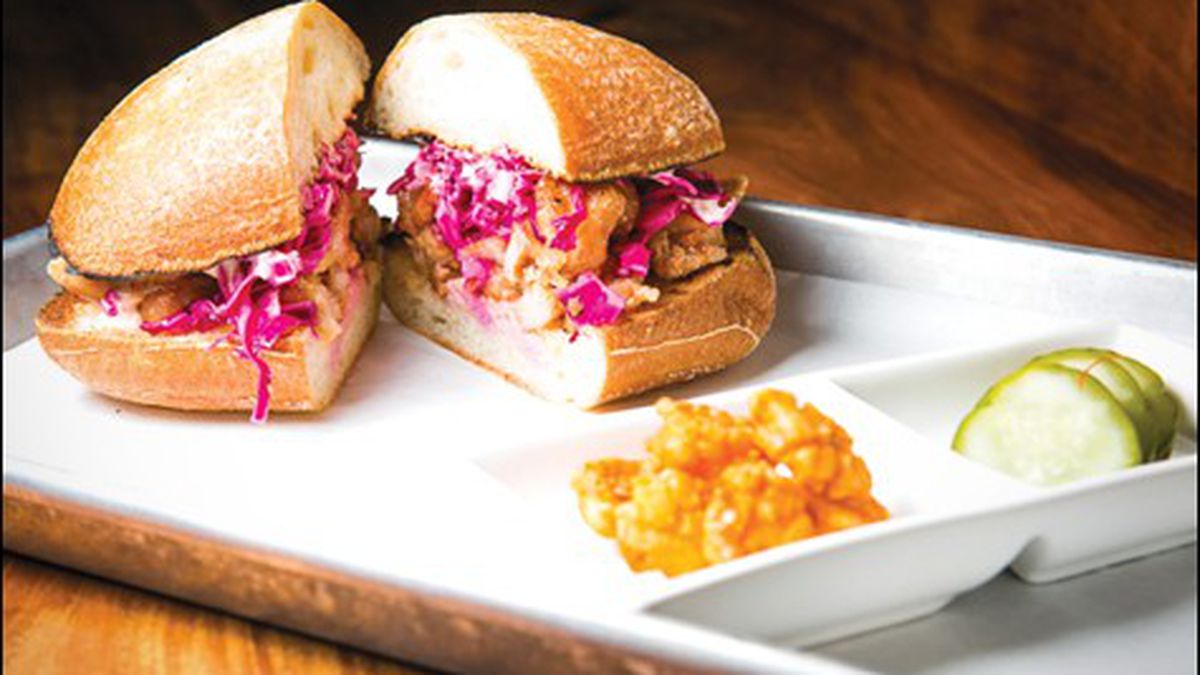 Our recommendations for the best fried chicken in the East Bay.

In the East Bay, fried chicken isn’t a fad; it’s a constant. The long line outside Bakesale Betty attests to this. Rain or shine, it stretches down Telegraph Avenue with people waiting for a fried-chicken sandwich: free-range boneless breast, battered and fried, served on an Acme roll, with a tangy coleslaw accented with jalapeño.

Betty — aka Alison Barakat — may be the reigning queen of breaded and fried poultry, but there are plenty of other options, each with its own character. Here’s our rundown of the best:

Bakesale Betty has its imitators, but FuseBOX (2311A Magnolia St., Oakland, 510-444-3100, FuseBOXOakland.com) isn’t one of them. The West Oakland lunch spot has succeeded in creating a unique take on the fried chicken sandwich. Dubbed a Tokyo Po’Boy, the Japanese-inflected sandie is composed of crunchy, lemony, Japanese-style fried chicken nuggets (karaage) and red cabbage slaw on a soft, pillowy roll. It’s light and easy to bite into, and comes with a handful of rice crackers and house-made cucumber pickles. FuseBOX, located on a quiet street in industrial West Oakland, doesn’t yet have dinner hours, and its lunch hours are limited (only Wednesday through Friday), so aspiring diners will have to plan accordingly. In the meantime, customers — mainly diehard food nerds at the moment — seem to have no problem sharing the long communal table outside.

FuseBOX also makes a mean Korean fried chicken, but for that I go to Oriental BBQ Chicken Town (6101 Telegraph Ave., Oakland, 510-595-5338), which is basically a pub that’s open into the wee hours and plastered with posters of maniacally happy Korean young’uns drinking soju. One can get lost here as the dim lighting, incessant house music, and platters of fried chicken encourage a Vegas-like time-suck. There are four kinds of fried chicken: The original version is a platter of about ten to thirteen crunchy pieces; a second popular version is slathered with a sweet and spicy sauce (emphasis on the sweet). Or, you can order a version topped with slivers of roasted garlic. My personal favorite is a soy-sauce-and-garlic version, which has faintly sweet hints of the marinade right in the meat, beneath the crunchy exterior. Pickled daikons are served alongside to help cut the grease.

The Grease Box (Facebook.com/TheGreaseBoxMobileKitchen) also brines its chicken, but in white wine, giving it a buttermilk-y tang. Dairy-free and gluten-free, it still satisfies, the crackly, substantial crust giving way to boneless free-range thigh meat oozing with so much juice it’s almost pornographic. Made by Lizzy Boelter, an irrepressible, cheerful Southerner with an easygoing smile, the chicken is cooked on a mobile cart in a cast-iron Dutch oven, and paired with chickpea flatbread and a bit of salad. The Grease Box’s Southern fried chicken can be found at events like the Underground Market in San Francisco.

Another tasty but more traditional rendition of Southern fried chicken is at swanky Picán (2295 Broadway, Oakland, 510-834-1000, PicanRestaurant.com) in Oakland’s Uptown district. The Gospel Bird Buttermilk Fried Chicken is a solid take on American comfort food, especially when served alongside a palm-size iron skillet of mac ‘n’ cheese — chewy, gooey, and tangy with smoked gouda. The fried chicken batter is strongly seasoned with black pepper, and it doesn’t shatter when you bite into it. It’s greasy enough to let you know you’re eating fried chicken, but not greasy enough to inspire (much) guilt — especially since the bird is organic.

Mr. Green Bubble (4299 Piedmont Ave., Ste. D, Oakland, 510-788-4160), a milk tea shop on Piedmont Avenue, offers a completely different experience. With its bubbly, cartoon-bright decor and free wifi, the place serves as an alternative hangout to cafes, and a popular spot for teenagers after school. It’s also one of the best places to go in the East Bay for Taiwanese-style popcorn chicken, littered with basil leaves and taste-bud-stinging chili. Be warned, though: Even when you ask for it mild, it’s still atomically hot. The bite-size pieces aren’t overladen with batter, and they’re sticky and chewy on the inside, full of dark-meat flavor. Four dollars gets you two generous handfuls, making Mr. Green Bubble the most affordable option on the list.

Little Hong Kong Restaurant (10443 San Pablo Ave., El Cerrito, 510-524-0888), like many Asian restaurants on the El Cerrito stretch of San Pablo Avenue, has a faded cheeriness, but the place does a brisk business of authentic Cantonese food, including a stunning fried chicken, cheui pei lo mai gai: a whole chicken, deboned, stuffed with a concoction of sticky rice, mushrooms, Chinese sausage, and shrimp, then fried. Once cut into serving pieces, you can hold the boneless breast with its accompanying sticky rice in your hands — it doesn’t fall apart. It’s little surprise that such a complicated dish, usually served for Chinese New Year or at banquets, needs to be ordered in advance. It’s worth the wait.&#8;