The works by the Chinese-born artist at Mills College beg to be part of something larger. 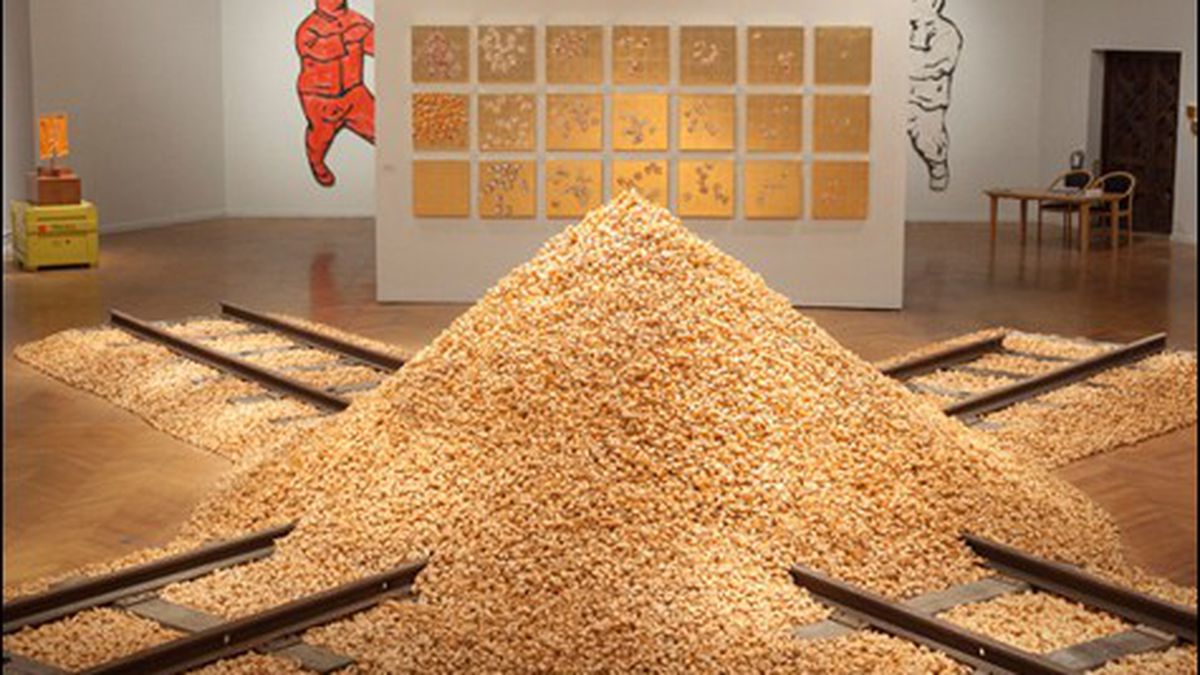 Arguably America’s most important Chinese artist, Hung Liu certainly possesses a singular background. Born in China in 1948 and having immigrated to California in the 1980s, she became one of the first Mainland Chinese artists to pursue a career abroad. Naturally, the West Coast art scene promptly pulverized Liu’s former, state-enforced artistic priorities (social realism suited for mural-making and other glorifications of the Maoist regime) in favor of more conceptual work. The transition was bound to be a jolt, but a productive one.

Now showing at the Mills College Art Museum, Hung Liu: Offerings displays two of the artist’s most prominent installations, Jiu Jin Shan (Old Gold Mountain) (1994) and Tai Cang­–Great Granary (2008). Both are massive, together occupying most of Mills’ sizable, parquet-floored exhibition hall. While they operate at different wavelengths, each is clearly a response to the artist’s midlife cultural transition.

Old Gold Mountain consists of two intersecting railroad tracks, nearly buried beneath a towering mountain of fortune cookies — 200,000 total, glowing and sweetly aromatic beneath strong gallery lights. While highly pleasurable and impressive in scale, Old Gold Mountain is also loaded with bittersweet allusions to the Chinese immigrants who labored on California’s first railroads, often perishing in the process. At Liu’s literal juncture, one senses the hope in such a cultural crossing, as well as the tragedy.

Tai Cang­–Great Granary consists of two components. The first, hung on the walls, entails various interpretations of a mural that Liu produced before her emigration and was later destroyed. Partly reconstructive, partly revisionary, the new work consists of actual images from the original piece, upon which the artist has digitally layered various elements of her more recent work, in effect producing a scene that is as visually engrossing as it is noisily complex.

The second component, occupying the gallery’s center space, is a relatively silent work: several dozen antique dou, a traditional Chinese container, containing different grains and foodstuffs native to specific regions of China and accordingly arranged to produce of sort of map. Like Old Gold Mountain, this work — the containers holding staples like rice, dried mushrooms, flowers, and tea — activates the olfactory sense, which is thought to be the most potent memory trigger. Only this time, the smells are faint, almost imperceptibly distant.

While it is a treat to see these two major, installation-intensive works in person, Offerings is not a fully satisfying show, for it does not offer any new statements from the artist, nor is it anywhere near comprehensive enough to be a retrospective. A resolution will likely arrive this March, after Offerings closes, in the form of a larger exhibition of Liu’s work at the Oakland Museum of California. What we have now at Mills is an indispensable auxiliary, begging to form a part of something larger.

Previous ArticleA First Look at Oakland’s Off the Grid