As protests over Google’s private buses continue to make headlines throughout the Bay Area, the tech giant is looking to expand its transportation network — this time, on the waterways.

This week, Google is running a five-day trial service, operating private company ferries between the Harbor Bay terminal in Alameda and Redwood City. The announcement of the Google ferry trial comes from the Water Emergency Transportation Authority (WETA), which runs the San Francisco Bay Ferry services throughout the region.

Google will pay WETA $275 per landing, according to a press release. Google is also apparently providing separate, off-site parking as well as a shuttle service for its employees; they will not be permitted to park in the Harbor Bay ferry lot or on adjacent neighborhood streets, the agency noted.

The Google ferry will not impact the SF Bay Ferry schedule, according to WETA, which owns and operates five facilities in the Bay Area. 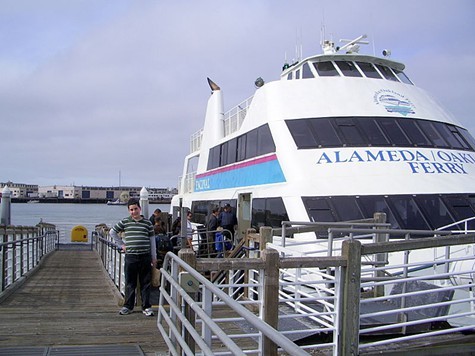 The press release stated: “WETA considers the Google ferry a validation of the near- and long-term importance of water transit to the region.” The announcement also offered these quotes of support from officials within the agency:

“We are confident that the Google ferry trial will not impact San Francisco Bay Ferry operations and that there will be no impact on parking availability for our riders at the Harbor Bay terminal,” said WETA spokesman Ernest Sanchez. “Our regular schedules will remain intact. Additionally, Google will provide a separate parking facility for its employees so that Harbor Bay parking for SF Bay Ferry riders will remain as is.”

“WETA has a long-term strategic plan for expanding ferry service in San Francisco Bay,” said Nina Rannells, Executive Director of WETA. “The Google private ferry service can be a complement to the public service provided by WETA and other Bay Area ferry services. We look forward to working with Google during this trial period.”

The Google ferry, for this week at least, will potentially give East Bay employees an alternative to the shuttle buses, which have arguably prompted the most heated protests in Oakland.