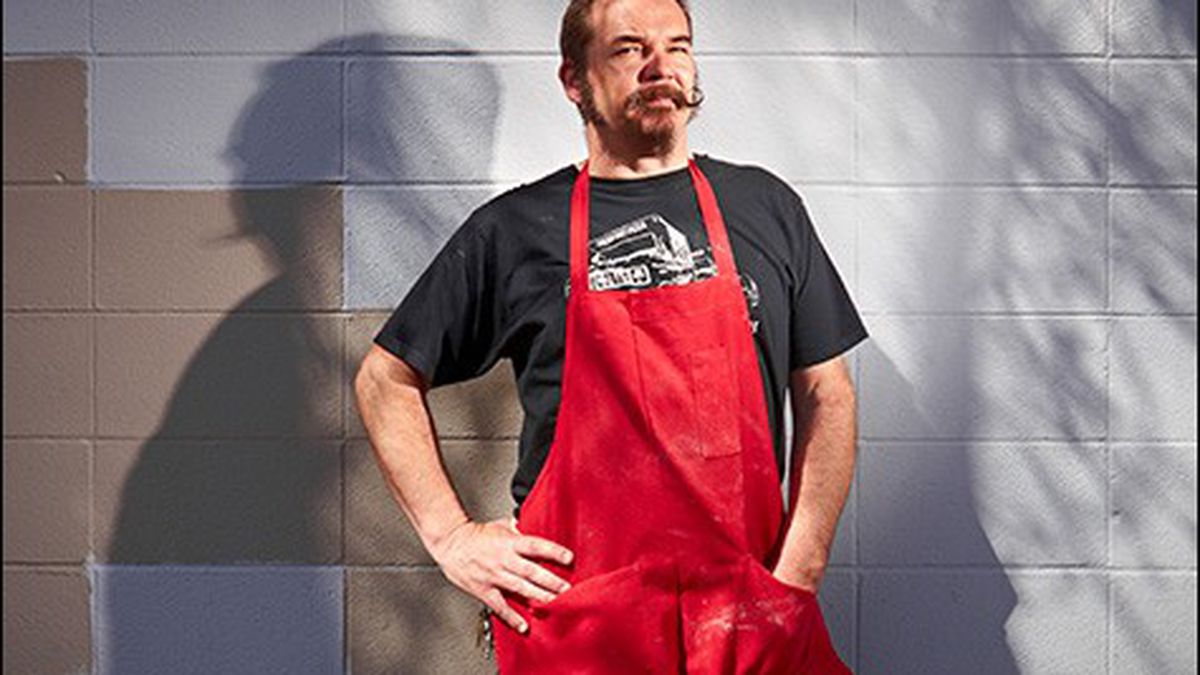 In January, just days after opening the Fist of Flour Doughjo (4166 MacArthur Blvd., Oakland), James Whitehead blew out one of his pizza ovens, and then an electrical malfunction nearly set the place on fire. Another morning, someone cut all of the building’s outside phone wires.

For the past several years, Whitehead has been known around the Bay Area as a food-truck guy — a “scofflaw” and a “renegade of the pizza world,” as he put it. So it seemed like an understatement when Whitehead said, “A lot more overhead, really, is the biggest difference for us now.”

Misadventures notwithstanding, Whitehead is an enthusiastic cheerleader for his new Laurel district takeout shop, which he opened at the site of an old, rundown pizzeria that he painstakingly refurbished. Now, he’s the proud owner of something he said he never anticipated when he first started slinging pies out of a hand-built oven: a brick-and mortar restaurant of his own.

Whitehead isn’t alone. A growing number of the East Bay’s gourmet street-food pioneers are opening restaurants. After years of doing the rounds on the local farmers’ market circuit, Cholita Linda (4923 Telegraph Ave., Oakland) opened a brick-and-mortar taqueria and casual pan-Latin restaurant in Temescal in February. KoJa Kitchen (2395 Telegraph Ave., Berkeley), whose Emeryville-based trucks specialize in crispy rice-bun sandwiches and other Korean-Japanese fusion dishes, recently opened a shop on a busy stretch of Telegraph Avenue, perfectly positioned to cater to hungry UC Berkeley students. And more trucks-turned-restaurants are just around the corner: LIBA Falafel’s first brick-and-mortar shop is due to open in Uptown Oakland, at 380 17th Street, this summer. Handlebar (984 University Ave.), a restaurant and bar in Berkeley co-owned by Fivetenburger proprietor Roland Robles, will open as early as the end of this month, and Robles has begun planning a brick-and-mortar version of his signature burger truck as well.

But that doesn’t mean that the transition is an easy one. As notoriously grueling as the food-truck business is, first-time restaurateurs interviewed for this story said that brick-and-mortar life has presented its own set of difficulties. LIBA Falafel owner Gail Lillian, who recently started construction on her new restaurant, said she needed friends and relatives to co-sign loans to help her get her project off the ground. For KoJa Kitchen owners Alan Tsai, Eric Thai, Hiep Lien, and Mike Hayashi, the challenge has been adjusting their menu and staffing schedule to accommodate a customer base that now consists almost entirely of college students — a demographic known for frugality and for eating at unusual hours.

According to Whitehead, the biggest challenge — aside from figuring out how to make sure takeout customers still have a hot pie by the time they get home — has been psychological. “They’re adjusting to having four fixed walls instead of going out and doing a different event every day,” Whitehead said of his employees. “Everyone loved working with me because of the variety of events, which breaks up the monotony of a nine-to-five job.”

That said, slinging pizza out of a tiny takeout shop — “no tables, no seats, just good eats,” as the Doughjo’s tagline states — is hardly anyone’s idea of a typical nine-to-five. And a brick-and-mortar home offers food truck entrepreneurs several obvious advantages.

For starters, a permanent location means customers always know where to find them. And the perks of having a larger physical space are obvious. As Robles put it, “I’m excited to have a kitchen that doesn’t move and a refrigerator that’s bigger than three feet square.” Lillian said her brick-and-mortar will allow her to prep all in one place; currently, whenever she gets a big catering gig, she has to scramble to coordinate schedules because the trucks are the only place where she has a fryer.

For Robles, his experience is coming full circle. He started out as an executive chef, and launched Fivetenburger as a fun side job to do in between restaurant gigs. Now, four years later, “this is the longest job I’ve ever had,” he said.

For Robles, Handlebar represents something else, too — a chance for him to get back in the kitchen and cook. Once a food truck reaches a certain level of success, its proprietor winds up spending more time managing the business than actually making the food. (For the record, Robles stressed that while Handlebar will have a burger on its menu — slightly fancier than Robles’ signature food-truck version — the restaurant won’t be a Fivetenburger clone. Instead, the menu will offer gourmet twists on American comfort food: a “breakfast corn dog” made by frying a sausage dipped in pancake batter, a take on mac ‘n’ cheese, and so forth.)

But what — if anything — does this shift from mobile vending to permanent homes mean in terms of the current state of the food truck industry? A cynic might wonder if, in spite of the popularity of events like Off the Grid, the mobile food trend, at least here in the Bay Area, is dying. After all, if you spend any amount of time talking to food-truck operators, they’ll regale you with tales of long hours, burdensome regulations, and the endless hustle. Maybe that kind of life isn’t sustainable. Maybe setting roots down in a brick-and-mortar is the necessary endgame for any food entrepreneur who wants to survive in this business for the long haul.

For what it’s worth, all of the fledgling restaurateurs I spoke to were adamant that they’d continue to have a significant mobile aspect to their business. In fact, according to Whitehead, Fist of Flour has more weddings and other big festival gigs booked for the upcoming summer season than ever before. Having the restaurant will help him get through the lean winter months.

Lillian said that, if anything, she feels that the food truck scene is more vibrant — and more vital — than ever before. “Food trucks are popular because they’re filling a niche that restaurants aren’t filling,” she said. “We’re providing an eating experience that’s not ‘sticky.’ You get your food and then you’re liberated.”

Customers don’t have to make small talk with a server. They might not feel obligated to abide by a standard restaurant tipping structure. They don’t need to change out of their sweats or their flip-flops; they can grab their food and sit down on a bench with a book.

According to Lillian, there aren’t many truly casual restaurants that also serve high-quality food in the Bay Area — taquerias, she said, are some of the only places that have that vibe. So the brick-and-mortar version of LIBA Falafel will stay true to the spirit of a street-food-style falafel shop. It won’t be a place where customers will want to sit down for an hour: The only seating will be a few stools facing a narrow counter.

“I’m working hard to not have it be thought of as a restaurant,” Lillian said.