The rise in delivery-only businesses has given longtime Bay Area chefs a different kind of executive role — and a fresh challenge in the kitchen. 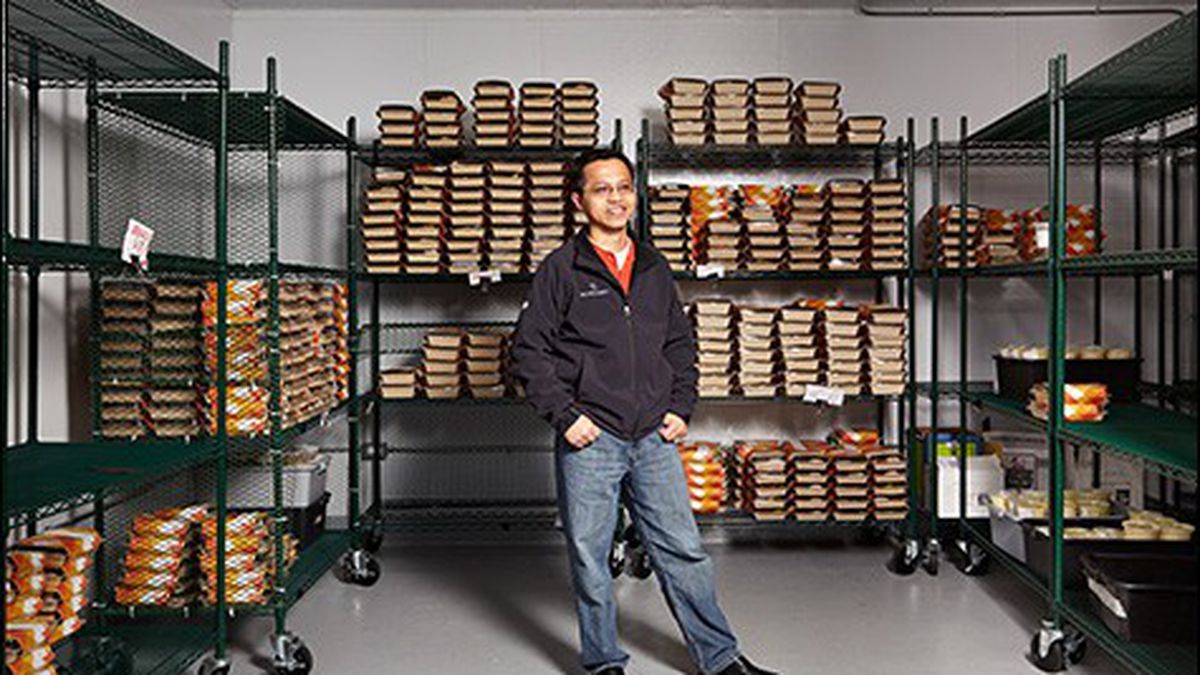 Ray Reyes had been working in the restaurant industry for more than a decade — as a line cook and sous chef at Bay Area establishments such as Bistro Liaison in Berkeley, Yoshi’s in Oakland, and Michael Mina in San Francisco — when he decided he was ready to step into an executive chef position. But the Berkeley-based chef found himself working in a kitchen that was very different from the ones he was used to. For starters, there was no restaurant.

In April of 2012, Reyes started working part-time for Munchery, a San Francisco-based home-delivery startup, as a partner chef. There, he began cooking affordable, restaurant-style, ready-to-go meals. Eventually, he left his job as a line cook at Gather in Berkeley and, in June of 2013, began working full-time as a resident chef at Munchery. It’s the kind of executive role he had always wanted, with a competitive salary and nine-to-five schedule — a rarity in the restaurant world. “The lifestyle is different. I now have weekends that I enjoy with my family and friends,” said Reyes, who specializes in pan-Asian and classic French dishes. “Moving out of the restaurant was one of the best decisions I made.”

Munchery co-founder Tri Tran said the company gives its chefs the freedom to create unique and dynamic menus along with the opportunity to access the resources of traditional restaurant kitchens without many of the standard pressures of a brick-and-mortar business. Munchery, which offers new menus daily and now serves roughly 30,000 customers throughout the Bay Area, is one of several new local food-delivery companies that have expanded in recent years, capitalizing on the demand for healthy meals from people who don’t have time to cook for themselves. Every Munchery meal arrives chilled — not frozen — and only requires a few minutes of heating. Munchery offers dinners each weeknight, with an average delivery charge of about $4 (no more than $4.95, and for some areas in San Francisco, as low as $2.95). The entrées range from $8.95 to $14.95, and many cost around $10.

It’s been easy to attract established chefs, said Tran, who launched Munchery in 2011 and expanded its service area to the East Bay in November of 2012. Tran said the company’s resident chefs — who work full-time in Munchery’s kitchen in the Mission District — are typically paid about 30 percent more than market-rate salaries. (In addition to seven resident chefs, Munchery works with about 35 independent partner chefs, with about twenty of them serving dishes in a given week.)

After rising up the ranks in the restaurant world, chefs often choose to become private cooks or start their own catering businesses, or open their own brick-and-mortar spaces, Tran noted. That latter option is “extremely risky,” he said. “They can lose all of their money.” At a company like Munchery, he said, “You don’t have to be stuck with those two options.”

“We really elevate chefs here,” Tran continued, noting that the company’s chefs have online profiles and provide in-depth descriptions of their dishes. “The chefs are the stars. They design the menu and execute it and the customers can have direct interactions with them. … And the chefs are encouraged to flex their culinary muscles.” Customers can rate the chefs and their meals, giving them extensive feedback through publicly viewable reviews.

“There’s a lot of creativity allowed,” said Bridget Batson, who’s been a resident chef at Munchery since November. “Our judge and jury are the customers.” And unlike typical restaurant positions, which include a wide range of administrative and managerial duties, “Here, they really want us to focus on the cooking,” she added. The only unique “stress factor,” she said, “is trying to make dishes that travel well, reheat well, and still look good.”

Munchery is one of a handful of local delivery companies that have grown rapidly in recent years. Berkeley-based SpoonRocket, which launched last summer, now serves roughly 2,000 gourmet meals per day throughout the East Bay, and, as of last month, in San Francisco’s SoMa district. SpoonRocket — whose tagline is “most convenient meal ever” — promises to deliver its $8 meals within ten to fifteen minutes of ordering online.

The concept was immediately appealing to executive chef David Cramer, who, after nearly 25 years in the business, was looking for a new challenge. “It was the opportunity to create something that had never been done before. Delivering food in ten minutes? I couldn’t even wrap my head around it. How can I take fine dining and put it in a box and keep it warm and get it to people? It was such a unique challenge, I really couldn’t walk away.” When SpoonRocket first launched nine months ago, the company had about five employees, including two drivers, serving about one hundred meals per day. SpoonRocket, which was a product of startup incubator Y Combinator, now employs about 160 people.

“It’s a no-brainer,” Cramer continued. “If somebody told me for six or eight or ten dollars, you could get a meal to magically appear at my curb in ten minutes, I’d call bullshit. I’d say that’s impossible.” And in some cases, these meals are cheaper than the typical fast food chain restaurants deals — and definitely much healthier. “This is fast food 2.0.”

“It’s having a personal chef, but more affordable, since we are doing it on a larger scale,” said Katherine Frank, owner of Evolution Meals, a Daly City-based company that delivers around 4,000 meals per week — about a quarter of which go to clients in the East Bay. The service attracts both young professionals and busy parents who don’t have time to prepare healthy meals, she said. Evolution Meals employs about twenty cooks and twenty delivery drivers.

For Cramer, part of the challenge is offering two dishes daily that his team can prepare in large quantities and that will appeal to thousands of customers. But it’s also what makes his job rewarding — and unlike anything he’s ever done in his career. “It’s been a fascinating journey.”