.What Numbs the Tongue Will Warm the Heart 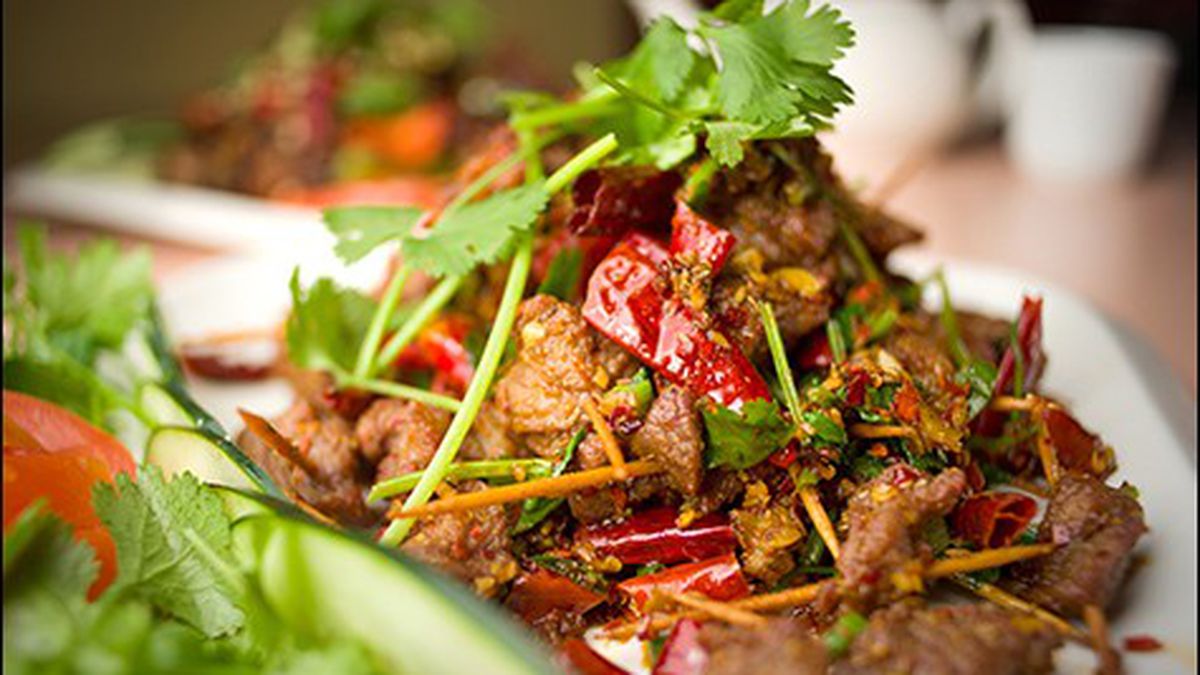 A picture might be worth a thousand words, but sometimes it only tells part of the story. The logo of Chengdu Style Restaurant, a new Sichuan spot located near the UC Berkeley campus, is a jaunty little cartoon chili pepper — arms outstretched, ready to leap into your mouth and set it aflame. Yes, Sichuan (aka “Szechuan”) dishes have a reputation for extreme spiciness.

But, really, the ingredient that defines Sichuan cooking isn’t the chili pepper but the Sichuan peppercorn, which isn’t a pepper at all but rather a purplish-red dried seed-husk from a kind of small citrus tree. Bite into one of these little pods and your tongue will go numb, leaving behind a warm sensation and a subtle citrus flavor. Sichuan chefs combine these huajiao with the fiery heat of dried red chilis to create an effect that the Chinese call ma-la: numbingly spicy. Yet some of the best dishes aren’t spicy at all, or are only slightly so.

All of which to say: If you pass up Chengdu Style because you think you can’t stand the heat, you’ll miss out on the unique sensory pleasures that have made the Sichuan style of cooking one of the most popular regional Chinese cuisines. The modest Berkeley restaurant is a family business, owned and operated by the Hus, who hail from Chengdu, the capital of the Sichuan province. April Hu, a Cal undergrad, manages the place along with her brother Bo. Their father, Jun Hu, is the head chef. So, for those who care about such benchmarks of authenticity, rest assured that Chengdu Style is a Sichuan restaurant run by genuine Sichuan people.

For a good introduction to classic Sichuan flavors, start with one of the cold appetizers — for example, a plate of thinly sliced beef shank and tendon (listed as “beef and ox shanks” on the menu) that comes drenched in a Sichuan-pepper-infused chili oil that was more pleasantly tongue-prickling than searingly hot, in part because of the peppercorns’ numbing effect. Bits of finely diced Chinese celery added a crunchy, refreshing counterpoint.

Most of the dishes at Chengdu Style are simple and rustic in their presentation — which isn’t to say they aren’t labor-intensive. One of the restaurant’s signature dishes is something called “toothpick lamb,” wherein each slice of cumin-spiced lamb is threaded onto an individual toothpick before getting tossed in the wok with fresh cilantro stems and a mess of dried red chilis. The idea, chef Hu said, is to keep the raw meat from sticking together in the wok so each piece cooks more quickly and evenly, yielding a more tender product. Truth be told, I wished the lamb was more tender, but, toothpicks notwithstanding, this was a decent version of the kind of cumin lamb dish you’ll find at many Northern Chinese restaurants. The toothpicks made this convenient finger food, but the meat is salty enough that you’ll want to eat it with lots of white rice.

More memorable was a dish listed on the menu as “floured sliced pig’s trotter.” The trotters had been braised in soy sauce and various spices until tender, then sliced into hunks and stir-fried with bell peppers, onions, and green chilies. The pleasures of the dish were, in part, textural. Each piece was chewy and unctuous down to the bone. But the best part was the occasional whole Sichuan peppercorn — a green varietal (brought in from Sichuan, the chef said) that was at least twice as potent as the more common red kind. Each time I bit into one, my tongue turned numb almost instantly, as if jolted with electricity. The warm, tingling sensation and citrusy aftertaste blended deliciously with the meat.

The restaurant is located on the second floor of a YWCA building, in the former Le Petit Cheval space. The dining room isn’t much fancier than a cafeteria: Some colorful Chinese opera masks mounted on the wall were the only decor. But it’s a pleasantly bustling place, and the cozy, tree-shaded front patio is the perfect spot for your next study-group meeting. The crowd skews heavily toward Chinese international students, especially during the weekday lunch rush, when the restaurant offers steam table service in addition to its regular menu — $6 or $7 for two or three items and a heaping mound of white rice.

As with many Chinese restaurants that don’t particularly cater to Westerners, the menu can be intimidating in its broad-rangingness, with several categories of items that might be bewildering to some diners: assorted meats “boiled in hot sauce” (a very saucy preparation), an array of “griddle-cooked” dishes (more commonly referred to as “dry pot” — like hot pot, but served sizzling, without the soup), and a whole section simply labeled “spicy.” If you don’t order carefully, it’s easy to end up with an unbalanced meal. Make sure you order at least one of the simple vegetable dishes. I appreciated the natural sweetness of the tender-crisp sautéed Arden lettuce (A-choy).

Much of the menu is rather clumsily translated, so it’s helpful to bring along someone who can read Chinese. But even ordering half-blindly, we stumbled onto several pleasant surprises. “Tofu pudding,” for instance, is something I’ve always known as a dessert, but the sliced fish with tofu pudding was a spicy-savory version that featured tender fish and delicate tofu served in a pool of frighteningly red, but only mildly spicy, ma-la chili sauce — another dish that was utterly addictive when eaten with white rice.

And the “flour steamed pork” turned out to be fenzheng rou, one of the home-style comfort dishes of my youth: pork coated in a seasoned rice powder and steamed, along with chunks of sweet potato, until the meat was tender and the vegetables impossibly soft. Chengdu Style’s version used thick slices of fatty pork belly, resulting in a dish that was decadent as well as rustic, and utterly familiar — not much heat, just a shadow of star anise hanging, ghostlike, over each bite.