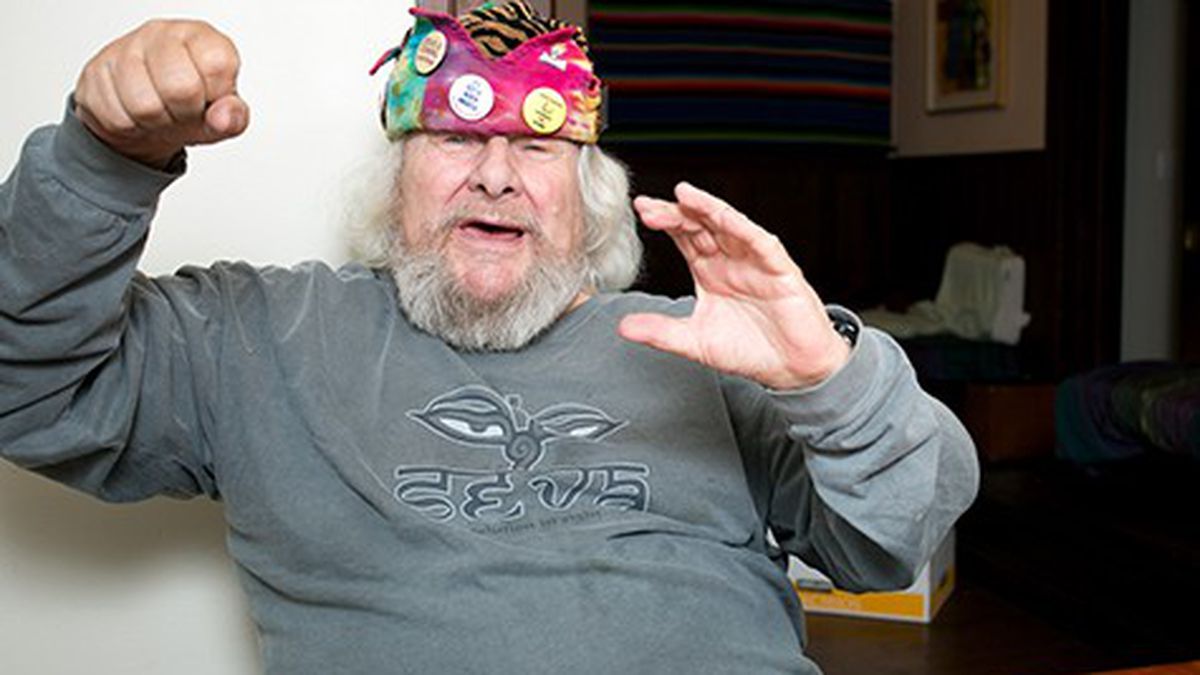 On the eve of his 79th birthday, the Berkeley icon remains altruistic and committed to humor in the face of tragedy.

Deep creases leave the impression of a sly grin on Wavy Gravy’s face at all times, even when asked about the police beating that earned him a full-body cast and lifelong back problems. “I used to have a lot of problems with those guys,” croaked Gravy. “But my greatest hero, Lenny Bruce, taught me a lesson. He said that there are ‘pigs, police, and peace officers.’ At the end of a demonstration, I’d give my clown nose to the best cop.”

Gravy has a birthday coming up — “in 21 years, I’ll be a hundred” — a milestone he’s celebrating in characteristically altruistic fashion, with a benefit concert at the Sonoma Mountain Event Center in Rohnert Park. The show honors Seva, the humanitarian nonprofit Gravy represents to the public. He got The Grateful Dead to headline the first benefit. This year, it’s Edward Sharpe & the Magnetic Zeros. Gravy likes talking about Seva, noting its partnerships with, say, Toms, which provides one eye-surgery for every pair of sunglasses sold. He also likes talking about the Hog Farm, the massive North Berkeley commune he calls home, because its 1960s origins are the source of his own great story.

Which he’s told many times, with great pleasure, and without prompt. Gravy, sporting a jester’s hat, hobbled over to the Hog Farm kitchen table and launched right into the “kitchen synchronicity,” his coinage for embracing the whims of chance, of his crew’s arrival at a real hog farm more than forty years ago. Ken Kesey dosed the beer, again, there were seven years spent bussing across three continents, and that circuitous aid-delivery trip to Nepal was revelatory.

Gravy grimaced twice. Once, when Mrs. Gravy popped in to mention something about taxes, and again when asked about the tragic earthquake in Nepal. Still, even that topic dovetailed into another anecdotal lesson, this time about the press. He was about to get on the phone with Rolling Stone (not The New York Times, whose appendage of “Mr.” to “Gravy” is a source of endless delight to Wavy Gravy) for the purpose of drumming up support for Seva’s efforts in Nepal. He brandished some printouts with talking points. “Seva has already distributed more than 7,000 tents to families in the hardest hit districts,” stated one bullet.

And then it was 1969 again, with Gravy and the Hog Farm family in an airport terminal. They were on the spot. A gaggle of reporters just informed them that they were actually the security force at Woodstock. “The world press was there, and they said, ‘What are you going to do for crowd control?’ We said cream pies and seltzer bottles — and they all wrote it down.” Gravy’s eyes widened. Chuckling, he leaned in and revealed, “That’s how I learned to manipulate the media.”

Anyone who’s seen Saint Misbehavin’, the full-length documentary about Gravy released in 2009, will recognize some of his punch lines. “I plan to watch that movie every year to remember what I did,” he said. “Oh yeah, there I am going over the Khyber Pass on top of a bus! … The roof is the Riviera of the bus, so of course you’re not allowed up there in the free world.”

The through-line for Gravy’s escapades, or at least the filter through which he chooses to relay them, is humor. It’s evident in the way he spins every nightmare — Vietnam, police brutality, starvation — with a bit of levity, and yet avoids trivializing the grim realities, especially in politics. “We supported LBJ, who became the biggest killer since Attila the Hun,” he recalled. “So, next time, we ran a pig for president. She was the first female candidate for that high office.”

It’s like that with the pigs, too. “We’d get pulled over every thirty miles,” he recalled of the Hog Farm’s mobile days. “We got good at that. We’d have them changing the babies’ diapers and drinking tea.”

Even though Gravy prefers to recount finely crafted narratives from the heady days of a generation to which he’s an icon, he harbors plenty of enthusiasm for contemporary activists. When asked for thoughts on Occupy, or the recent protests following Freddie Gray’s death at the hands of the police in Baltimore, he replied without hesitation, “I’m only sad that I just don’t have the physical wherewithal to jump in. But it needs more jokes. I’d be the guy tying balloons to the barbed wire.”

To Tax or Not to Tax?