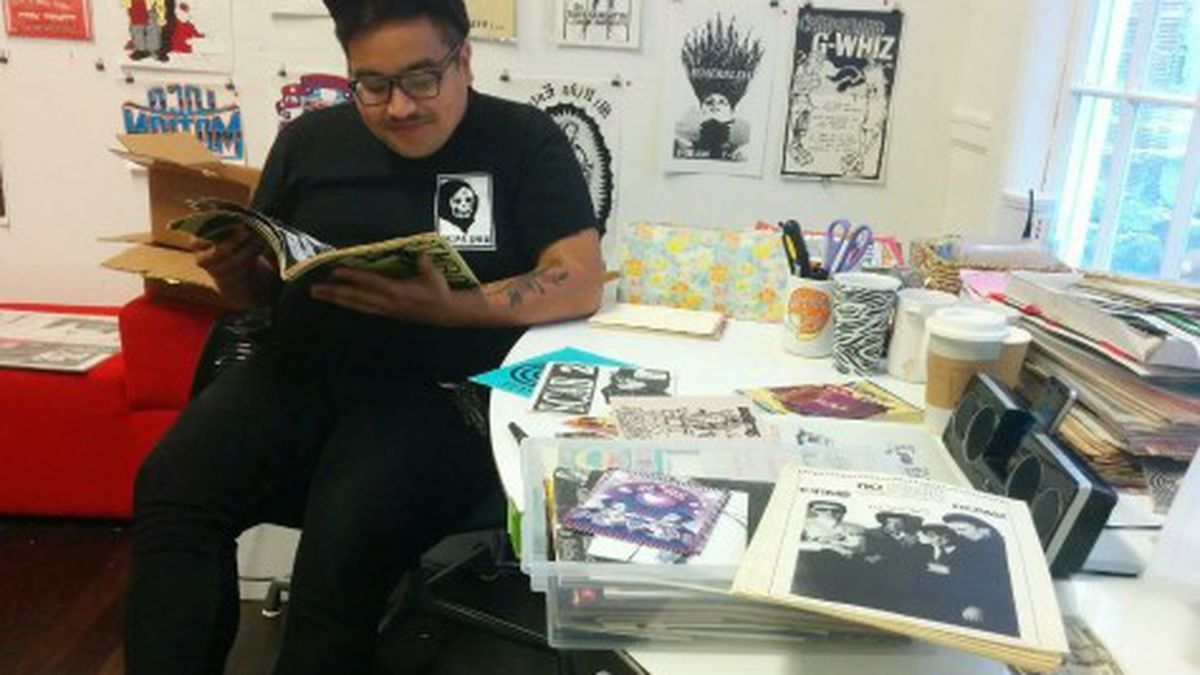 Goteblüd: ‘Zines Will Probably Outlast All of the Media Meant to Replace Them’

In 2010, Matt Wobensmith curated an exhibit called You Are Her, featuring more than 1,000 zines and fliers identified with the confluence of feminism, youth empowerment, punk, and publishing known as riot grrrl. Crucially, You Are Her included a photocopier. Patrons handled, read, and reproduced any and all of the printed matter, regardless of an item’s fragility or value to collectors.

The art world’s usual white-glove treatment of zines can get awkward — as illustrated by last year’s Yerba Buena Center for the Arts show Alien She (see “Riot Grrrl Gets the Gallery Treatment” 11/05/14) — but Wobensmith’s interactive You Are Her exhibit nimbly mediated zine and institution culture. It was well-received at the New York Art Book Fair, and it started at Goteblüd — Wobensmith’s perusable archive and saleable inventory of zines in an unlikely nook off Valencia Street in San Francisco.

Opened in 2009, Goteblüd feels more like a living room than a shop or archive. There’s no street signage or clear point-of-sale. On weekends, Wobensmith or an intern buzzes visitors into a square room with a coffee table, couch, and the yellowing ephemera. “Goteblüd,” a neologism that references Wobensmith’s comic-book collaboration, looms in Gothic lettering on a wall, next to a black splotch of paint that intimates the outlines of cats. Last Saturday afternoon, Wobensmith opened a box of punk zines and gestured something to the effect of, “Go for it!”

Among the contents were copies of Damaged, Search & Destroy, and Another Room, three Bay Area publications from the late 1970s and early 1980s focused on underground rock and rock-adjacent styles that Wobensmith showcased in another Goteblüd exhibit, Punk Tabloid. He noted the respective editorial bents and design sensibilities of each rag, citing printing processes and the influence of fashion magazines. Wobensmith started to explain that students from the San Francisco Arts Institute had pollinated the region’s fertile punk press, but then another crude piece of paper prompted him to relate different historic tidbits. This went on for hours.

By design, there are no new zines at Goteblüd (there are plenty nearby at Needles & Pens.) Wobensmith dismissed today’s zines as being “craft-focused,” mostly appearing in expensive, hand-numbered editions with trite content. He picked up, S.C.A.B. (The Society for the Complete Abolition of Breeding), a radical queer zine from his collection that skewered integrationist gays. “That shit was raw,” he said, making today’s zines seem precious in comparison.

“It’s important to read the past from the past’s perspective,” Wobensmith continued, noting how zines provide essential reportage on underrepresented histories. Initially, he planned to deal very selectively, but one day he came across a cache of neo-Nazi zines online, listed by some “sad, old toothless skinhead,” he said. Wobensmith then decided, “I need that stuff. We can’t restrict our view of history to the things we like.”

To illustrate, he related a discovery about punk publications skewing another marginal community’s experience. Old regional zines frequently mention fights between punks and Latino gangsters in the Mission District, but the now-familiar punk persecution complex isn’t the whole story, as Wobensmith realized when he discovered a zine rom the era called Cholo. It depicted a sharply dressed Latino fellow punching a punk in the face, along with local perspective on punks disrespecting the neighborhood’s longstanding cultural character. The value of zines, Wobensmith said, is evident more so in the aggregate than individually.

Josh Cheon, who operates Dark Entries Records — the local label that released two volumes of Bay Area Retrograde, diligently compiling the region’s post-punk outliers (see “The Other BART” 10/22/14″) — is just one intrepid patron of Wobensmith’s trove. “A very small percentage of the publications that came out in the Seventies and Eighties are even mentioned online,” Cheon said, “let alone scanned, let alone scanned at a high enough resolution to reprint.” He sourced the cover imagery for both volumes of B.A.R.T. through Goteblüd.

Steve Viaduct, who has combed the archive for projects related to his reissue label, Superior Viaduct, echoed Cheon’s appreciation. “I’ve hung out there for hours, talking about punk culture,” he said. “It’s amazing how much we’ve moved away from paper … and it makes one wonder what the future artifacts will be. Most good blogs don’t last for more than a year and eventually they’re deleted.”

Indeed, a recent article in The New Yorker about the Internet Archive in San Francisco (the city is apparently intent on accumulating digital waste, in one way or another) stated that the average lifespan of a webpage is about one hundred days. “Zines will probably outlast all of the media meant to replace them,” Wobensmith reckoned. He cited a classic format gaffe: Libraries once started to swap paper for microfilm, only to end up with degrading microfilm and expensive, shoddy machines to read it.

When Wobensmith made a website, he created a monument to porous internet by signing up for LiveJournal, the once-mighty social networking platform. The webpage hosting service GeoCities was defunct, he lamented. Of course, the idea that zines are worthless in the digital era, a presumption that Goteblüd combats, was very helpful for Wobensmith in accumulating his collection to begin with.

In the 1990s, Wobensmith founded Outpunk Records and published a zine by the same name, contributing to a queer punk scene emerging in tandem with riot grrrl. When his old compatriots in self-publishing started to shed their ephemera in the 2000s, a horrified Wobensmith stepped in to offer cash for what they were about to recycle. Tellingly, the Outpunk archive now lives at New York University.

“Now, with Google, people expect everything to be indexed,” Wobensmith said. So “institutions are getting hip to what zines are, which is the internet in print form, the peer press.”

Most of his business comes from higher-education archives, which are keen to acquire primary-source material in bulk. In that role, Wobensmith is a liaison between zine culture and institutions, making the material accessible to inquisitive individuals before it’s placed in a library. That also implicates Wobensmith in what’s been called the “museumification” of punk, in which a transgressive subculture is fixed in the past and sanitized for consumption. To that, Wobensmith retorted, “The museum will outlive your punk squat.”

Wobensmith was crestfallen to admit that he’s about to slash Goteblüd’s already minimal hours, to become open only by appointment. Goteblüd is certainly a corrective to the typically muted presentation of zines in gallery settings, but making the material accessible — positioned to circulate and agitate — is futile if no one rings the buzzer.

Which doesn’t diminish his faith in zines’ enduring appeal: “Lots of things seem mundane until they’re put into context,” Wobensmith said. “Like shit. A zine on shit might disgust you, but fifty to one hundred zines on shit could be valuable to someone researching excrement, bodily functions, cultural significance — and everyone shits, and they always will.”

‘We Won the War!’: Reaction to Landmark Medical Marijuana Ruling

Pumpkins Preach to the Choir