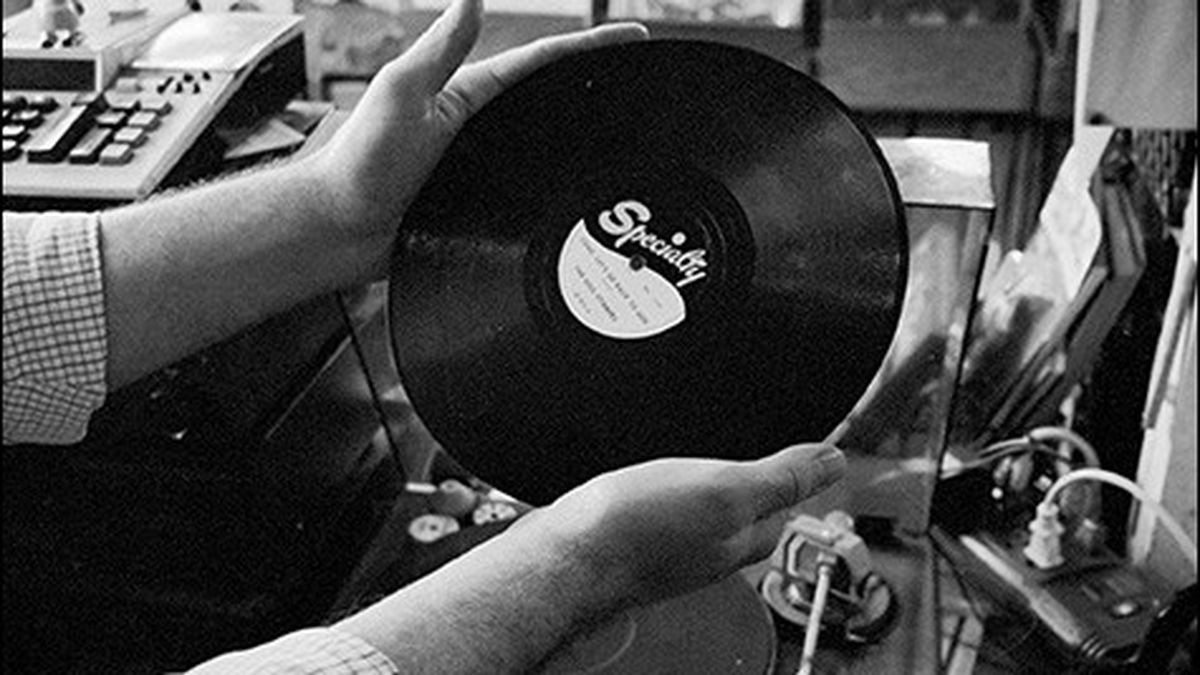 A new exhibit at the Oakland Museum of California explores our culture's fascination with records.

Sometime around 1980, when he was fourteen years old, Davey D was scavenging through records in a New York music store when he stumbled upon some Harry Nilsson recordings. Nilsson was a rare breed — a singer-songwriter whose fame and awards arose not so much from his own performance, but from those of others (“One” by Three Dog Night, for example).

“Afrika Bambaataa [the stage name of Kevin Donovan, a DJ from the South Bronx who’s often credited with jump-starting hip-hop] was in the store when I found that record,” Davey D recalled. “He was a pioneer, but also feared because he was a gang leader. He came over, and asked what it was. I told him the name and he just nodded his head. I snatched up all the five copies that were there.”

Since then, the influential DJ, journalist, and radio show host has amassed some 70,000 records. In an interview, Davey D insisted that he’s a curator, a keeper of Oakland’s distinctive musical history, and not a collector. His connection to music is more about emotions than economics. He spoke of alphabetizing his records by genre and described their BPMs (beats per minute) in the deep-throated, rumbling tones of a lover reminiscing about a tryst. “The special ones have been with me most of my life,” he said. “I won’t sell those, even though I’ve been offered a lot of money. They might end up on a shelf and part of our history would be gone.”

Such nostalgic associations to records form the basis of Vinyl: The Sound and Culture of Records, an interactive exhibit running April 19 through July 27 at the Oakland Museum of California. While museums have been known to take a common activity — like spinning an old record — and render it untouchable and precious, this exhibit aims to honor the vinyl format through sharing. It includes vinyl-focused talks, performances, and listening stations at which visitors can play the contents of individually curated crates, each containing 33 records that tell a personal story — one of which Davey D has assembled. Organized by OMCA Senior Curator of Art René de Guzman, Vinyl also displays record collections, memorabilia, and a turntable that drives a bird sculpture, courtesy of instrument-builder, MacArthur “Genius” award-winner, photographer, and composer Walter Kitundu. The exhibit launches with a record swap on Friday and opens on Saturday to coincide with Record Store Day. A series of “Talk and Play” presentations will feature a person telling a story, then playing a recording relating to it.

Guzman traced the roots of the exhibit by relaying a story of his own. In the winter of 1988, during a post-college trip that had gone on too long, he met a West Berliner on a train crossing East Berlin. She let him stay in her flat that night, and on his departure, she asked him to send her the English lyrics of Led Zeppelin’s “Going to California.” Guzman called it “a weird triangulation” when he realized California represented a place of promise and wholeness to someone living in a divided land, surrounded by a wall. When he returned to the United States, he found his copy of the album and sent her the lyrics: Made up my mind to make a new start, going to California with an aching in my heart. Sitting in his office recently, clutching the original Led Zeppelin album he’s kept ever since, he said he continues to be haunted by one fact. “I don’t know if she ever got them,” he said.

Although he clearly reveres vinyl, Davey D said records aren’t “spectacles” — objects to be viewed with awe, or valued so much that they become “untouchable” and are never played. He refuses to state a preference for digital over vinyl, or vice versa. Instead, he believes each form is a unique tool for connection. Vinyl’s sound is “warmer” than digital, he said, and he likes that he associates songs with album covers, such that when he’s DJing he can flip through records and easily locate a song. On the other hand, he also likes the flexibility of a digital recording. “I can manipulate it to accentuate the moment,” he said.

Creating that “moment,” that special persuasion a DJ wields over a crowd, is an art Davey D has cultivated. “The other night I was playing E-40’s ‘Captain Save A Hoe.’ When I dropped it on the crowd, it was the song itself that made the night special,” he said. “They were remembering their past with it.”