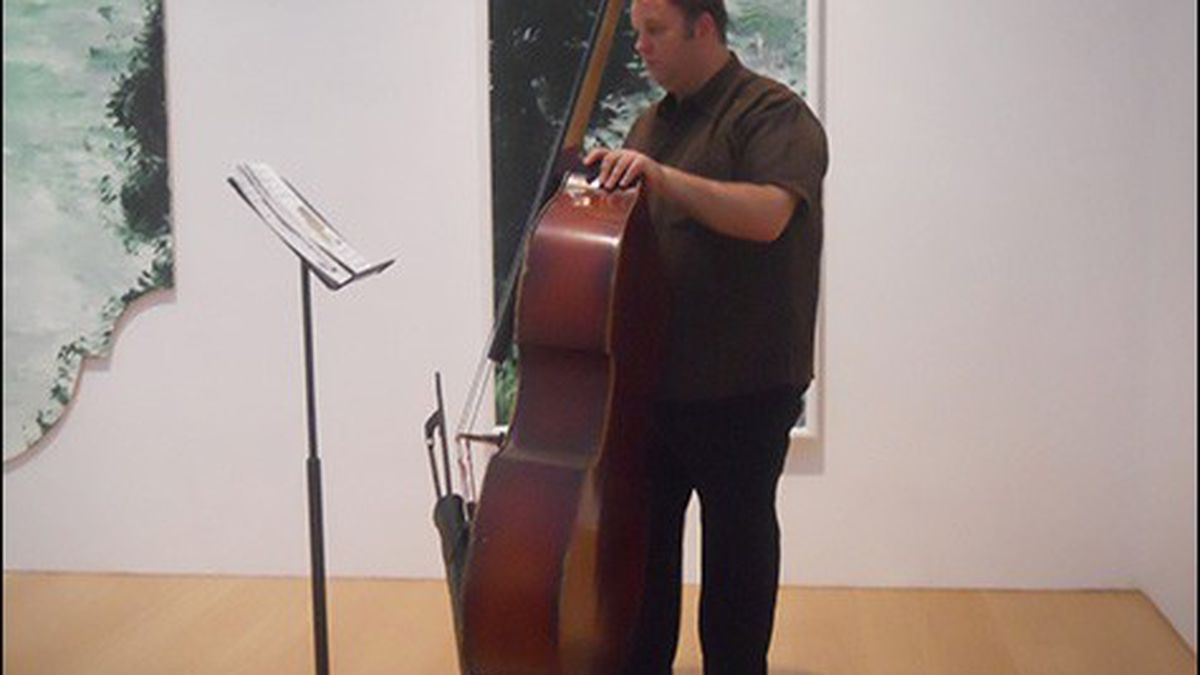 Damon Smith returns to the Bay Area for the first time since he moved to Houston four years ago.

When Damon Smith’s girlfriend decided to enroll in an art history doctoral program at Houston’s Rice University in 2010, the longtime Oakland resident and bassist was sad to leave a region in which he’d forged wide-ranging creative bonds. But he was entirely unsentimental about the Bay Area’s cultural shortcomings. As a devoted modern art lover himself, he also couldn’t resist the lure of Houston’s storied Menil Collection, with its treasure trove of works by Cy Twombly, Max Ernst, Mark Rothko, and Robert Rauschenberg. “Oil money is better at philanthropy than high tech, but I didn’t want to leave the Bay Area,” Smith recalled.

Four years later, the free-jazz stalwart feels right at home in Houston, but the Bay Area music scene is still feeling his absence. Great bassists are in demand even in the best of times, and these days there are few who collaborate as responsively, listen as deeply, and play as provocatively as Smith, according to saxophonist Phillip Greenlief. “I’ve been giving Damon a hard time since he moved, saying that he left a big hole,” said Greenlief, who’s also a prolific composer. “Where are the free improvising bassists who have a vocabulary of extended technique and super deep knowledge of that idiom? There are a lot of wonderful players here, but they’re not free improvisers. They haven’t devoted a big chunk of time to that work.”

Smith will temporarily fill that void at Duende on Friday, when he leads his first Bay Area gig since his move to Texas; he’ll be joined by Houston guitarist Sandy Ewen, drummer Weasel Walter (who’s also returning to the Bay Area for the first time since decamping for New York City several years ago), and special guest Roscoe Mitchell, the legendary Art Ensemble of Chicago woodwind explorer and Mills College professor. Smith will also perform on Thursday as part of the Luggage Store New Music Series in San Francisco, where he’ll reconvene with Bush of Ghosts, a texturally acute free improv trio featuring Greenlief and percussionist Spirit, and augmented by vocalist Aurora Josephson and alto saxophonist and flutist Biggi Vinkeloe. Ewen will share the double bill with her trio, which includes bassist Tony Dryer and percussionist Jacob Felix Heule.

With his imposing frame and huge hands, Smith looks like central casting’s notion of a bassist. He grew up in eastern Washington and spent his adolescence mastering death-defying moves on the freestyle BMX bicycle scene, a pursuit he continued after his family moved to Oakland in the mid-1980s. Inspired by the Minutemen’s Mike Watt, he took up the bass in his late teens and after several years playing punk rock turned onto free improvisation via pioneering German bassist Peter Kowald.

His dogged commitment to exploring free improvisation in an array of settings gradually earned Smith an international reputation. While sought out by his contemporaries, Smith has also performed and recorded with many of the foundational figures in American free jazz and European improv idioms, including pianist Cecil Taylor, Sun Ra alto saxophonist Marshall Allen, British guitarist Fred Frith, German saxophonist Peter Brötzmann, and Kowald himself.

He and Weasel Walter — who arrived in Oakland a decade ago with an underground reputation burnished through his work with seminal Chicago no wave band The Flying Luttenbachers — became a formidable rhythm section around 2006. They performed and recorded together frequently until Walter lit out for New York City around the same time that Smith jumped ship to Texas. A few years ago, Smith brought him out to Houston, a trip that led to an exhilarating untitled 2012 album with Ewen, released by Walter’s ugExplode label. These days Walter divides his time between New York and Chicago, while doing a lot of work with the fierce no wave singer and poet Lydia Lunch.

“He was a neighbor and we just connected right away,” Smith said of Walter. “It was pretty spectacular, finding out how much he could do, from quiet acoustic improvisation to full-on assaults. I miss playing with him a lot.”

Smith and Weasel are back in the Bay Area for a recording project organized by guitarist Henry Kaiser with British guitarist Ray Russell, an influential composer and producer long aligned with James Bond composer John Barry. It’s the kind of opportunity that should lure Smith back permanently, but he’s traveling with an artist who makes a strong case for staying in Houston. Toronto-born Ewen moved to Texas to study architecture, and she’s been a key component of Smith’s thriving Lone Star career.

“She’s got a totally original way of doing prepared guitar,” Smith said. “A whole language related to Fred Frith and Keith Rowe. Roscoe [Mitchell] was really into her playing, and that’s how we were able to make this Duende thing happen.”

Baby, the Rain Must Fall

The Return to Public Schools