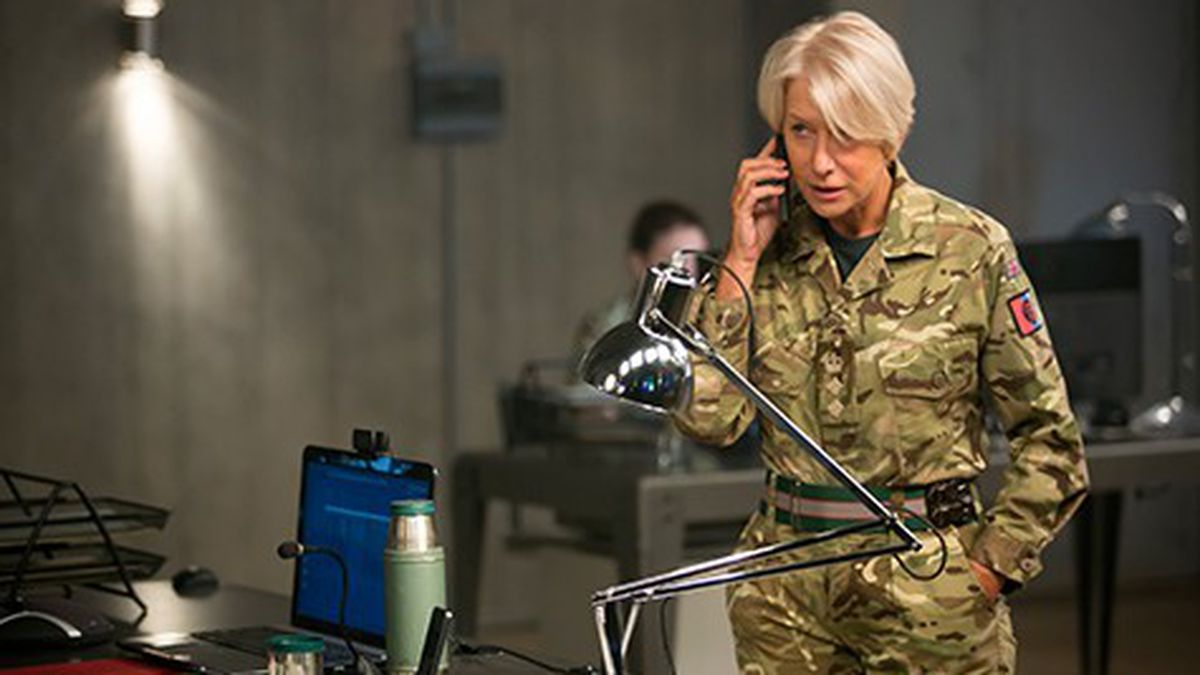 Drone warfare gets glossed over in Eye in the Sky.

There have been other movies about drone warfare, but Gavin Hood’s Eye in the Sky has something the other ones don’t: Helen Mirren. Unfortunately, that’s the best thing we can say about it. In director Hood’s topical war story, Mirren is a British Army colonel trying to stop a suicide-bomber attack in Nairobi, Kenya, by launching a missile strike — from her office on another continent — on a house where insurgents are strapping on bomb vests. But there are complications. A nine-year-old Kenyan girl named Alia (Aisha Takow) is selling bread in the street outside the target, and is almost certain to be killed in the air raid as it is planned. It’s bad public relations to blow a kid to smithereens, and the brass are worried about leaked footage. A workable solution must be found.

As in previous drone movies — they’re almost always presented from the point of view of whoever looks at the screen and pushes the button — much is made about the true objectives behind dealing instant death from above. Mirren’s Colonel Powell is the war hawk, a hard-hearted huntress unafraid of collateral damage (such as little Alia), just as long the bad guys are neutralized and terrorism is prevented. We never learn more about her, because Hood and his screenwriter, TV vet Guy Hibbert, don’t stay on her long enough for us to conduct our own critical blitz.

A decent cast of actors gets glossed over in the same way: including the late Alan Rickman, in his last screen role, as a vacillating general; Aaron Paul as the US Air Force officer who pulls the trigger from his hut in the Nevada desert; and Somalian actor Barkhad Abdi (the villain from Captain Phillips) as a Kenyan spy spotting targets on the ground for the United States and United Kingdom. Once the little girl is sighted as a potential victim, an unintentionally comical game of musical chairs takes place up and down the command ladder as various political and military types calculate their own best interest. We sit there encased in our comfy theater seats, and wonder: Does this much discussion happen with every drone strike?

The character we learn the most about is Alia, the one who plays with her hula hoop, dusts off the bread when it falls in the dirt, and whose chewed-up body gets pulled from the rubble afterwards. Hood, maker of Rendition, is a smart, socially conscious filmmaker trying to get Eye in the Sky to mean something on the subject of drone warfare. But the screenplay cannot or will not carry the load.

Facebook
Twitter
Previous articleParents Are Outraged that an Ex-49er, Who Is on Trial for Sexual Assault, Spoke to Students About Self-Discipline
Next articleWednesday Must Reads: Obama Picks Centrist for Supreme Court; Oakland Council Okays Controversial Housing Plan
18,632FansLike
0FollowersFollow
67,429FollowersFollow

The Surreal Garden of Bailey Hikawa