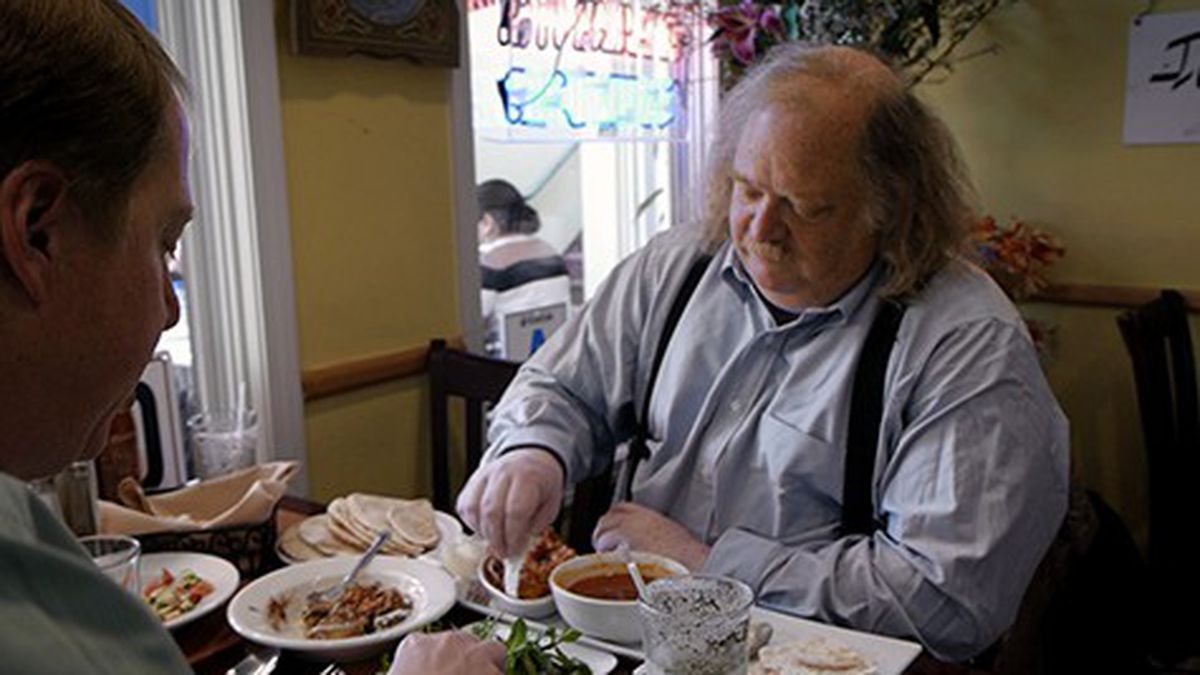 And Jonathan Gold takes note, in City of Gold.

Never underestimate the gastro factor. Long derided as a suspiciously facile feel-good option in narrative movies, food reigns supreme as a surefire crowd-pleaser in the documentary category. Whether it’s an outraged exposé of corporate farming or a paean to the glories of a certain menu item, anyone can relate to the alimentary impulse because everyone eats, and has an opinion about it. In the case of Jonathan Gold, the Pulitzer-Prize-winning culinary critic of the Los Angeles Times, just about everyone who has ever read him agrees he’s at the top of the urban restaurant reviewer food chain. LA is his City of Gold, and documentarian Laura Gabbert’s profile of him is easily the most entertaining movie in theaters this week.

It’s obviously fun being Gold. The 55-year-old Los Angeles native is a chubby, mustachioed former punk-rock cellist (!) who wears his thinning, reddish-gray hair long and favors khaki slacks held up by suspenders — in other words, the popular image of an old-school newspaperman. When he cruises the boulevards in his pickup truck on the trail of a rare dish in a strip mall, it’s easy to see that Gold loves his hometown with a civic booster’s joy, from Koreatown to Tehrangeles to East LA taco trucks to overlooked burbs, such as Alhambra, where he revels in the goose intestine at a Chinese resto called Chengdu Taste. He takes a newsroom anthropologist’s delight in revealing hidden treasures and investigating the multi-culti “fault lines” where hard-to-find eateries serve their own tiny communities.

Filmmaker Gabbert’s last release was No Impact Man: The Documentary, the wonderfully quirky story of a Manhattan family who lived a year while making absolutely no environmental impact. City of Gold operates in a similar down-to-earth sphere, shadowing Gold as he visits some of his best-loved spots and the people in the kitchen — the two are inseparable — and hearing their narratives, most often in modest surroundings. A few of his favorites: Grand Central Market on Broadway downtown; Mariscos Jalisco in Boyle Heights; Thai superstar Jitlada in East Hollywood; Kogi, a nouveau-Korean food truck; Trois Mec in Hollywood; Meals by Genet, an Ethiopian comfort food standout on Fairfax; Moles la Tia in East LA, for Oaxacan treats; and Guelagetza in Koreatown, where Gold craves the chapulines, fried grasshoppers. Los Angeles is a wildly diverse metropolis, and neither Gold nor his dinner guests ever let us forget about that.

The film’s talking-head urban theorists — including Gold’s personal inspiration, Calvin Trillin — propound knowledgably. They admire Gold’s culinary mapping and the way it becomes a guide to the sprawling metro region. But foodie pundits can’t come close to the storytelling verve of the folks behind the counter — as when a restaurateur describes how one old-style place serving Chinese-American food got taken over by a new owner who did good business dishing out the passé Chin-Am cuisine as an exotic experience to its China-born customers. If there’s a shortcoming in the doc’s wide-ranging survey, it’s in the apparent lack of African-American specialties. Earlez Grille, a Black-owned gourmet hot dog stand on Crenshaw, evidently closed after Gold visited the place on camera.

Jonathan Gold won his Pulitzer — the first ever awarded to a restaurant critic — in 2007, while writing his “Counter Intelligence” column for the LA Weekly, at that time an alt-weekly stable mate of the Express when this paper was part of the same publishing combine. If there’s a lesson in that, it’s that we should never take our local reviewers for granted. They just might be onto something special that the mainstream media hasn’t discovered yet.